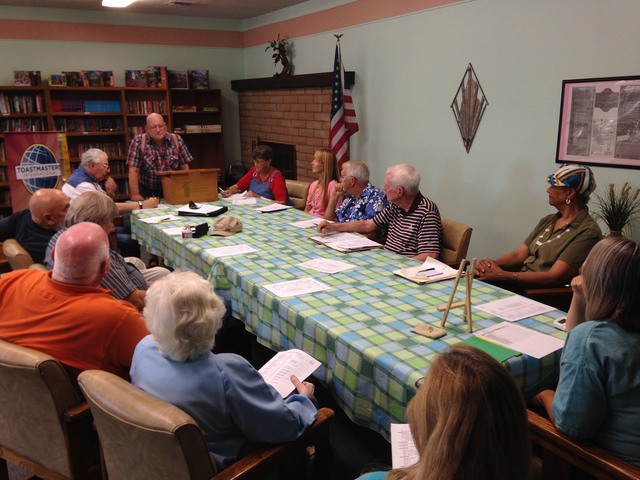 With roughly 20 members strong, Pahrump’s Toastmasters International Chapter is looking to increase its membership this year. The group, led by President Frank Johnson, at podium, meets every other Thursday at 7 p.m. inside the Comstock Park Clubhouse at Highway 372 just west of Blagg Road. Special to Pahrump Valley Times 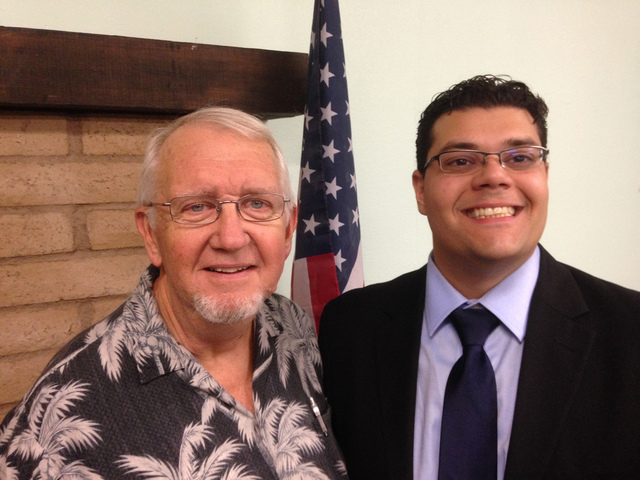 Glossophobia, or speech anxiety, is the fear of public speaking or of speaking in general.

According to some speech therapy experts, the average person ranks the fear of public speaking higher than the fear of death.

For Pahrump resident Leo Blundo, that fear could be hurting your professional and personal life.

Blundo is inviting the community to attend the Pahrump’s Toastmasters International Club’s 7 p.m. meeting on Thursday at the Comstock Park Clubhouse.

“The most important thing about public speaking is that you want to connect your message to an audience and you do that with good leadership skills and being able to speak clearly, along with your body to convey that in your message,” he said.

Blundo described the meetings as a safe environment where individuals can join like-minded individuals where the group talks, listens and evaluates the speaker to provide positive, constructive criticism to become a better speaker.

“We are a very good family with Toastmasters and it’s all about bringing them together and begin to help each other as well,” he said.

As an example, Blundo recalled an event where he was to speak before local Republican Party members two years ago.

He said he was well-prepared and ready to deliver his remarks when the unexpected occurred.

“I had my speech all written out,” he said. “It was short, sweet and straight to the point. As I was walking up to the stage the podium kept moving away from me. They actually moved the podium that I had planned on using to read my speech.”

As a result, Blundo said he had to simply, “wing it.”

“Even though I had most of it memorized, I wanted to use that podium, because I wanted it there to be my safety net. I had to come up with a plan B that I had not anticipated,” he said.

In part, and as a result of that experience, Blundo has since joined the Pahrump Toastmasters chapter.

Since joining, he noted that he’s much more comfortable speaking in front of audiences of any size.

During his time with the organization, Blundo has earned himself an honor of distinction, as he achieved the title of Competent Leader.

The program, he said, is a self-paced training regimen, which helps participants improve their leadership skills in a club environment.

“Through such interaction, participants gain a valuable awareness of the community in which they live and work,” Rex said. “They increase their self-confidence and understanding of others and they become better listeners, thinkers and leaders.”

Blundo said he wants to expand the membership of the Pahrump Toastmasters chapter. He said Thursday’s meeting will be a special one just days before Halloween at the Comstock Park Clubhouse.

“We are having a huge open house for the community and everyone is invited to come,” he said. “We want them to come out and see what we’re all about. It’s very important that you come in your Halloween costume, but if you don’t, that’s fine too.”

Additionally, Blundo said he wants the club to have more visibility in the community after meetings have been irregular over the past few years.

“We want people who have either a fear of public speaking or would just like to improve on their speaking skills to come out,” he said. “They can meet new friends and get their message out. This is an amazing program here in Pahrump and it’s about communication, because that’s what we do in our everyday lives.”