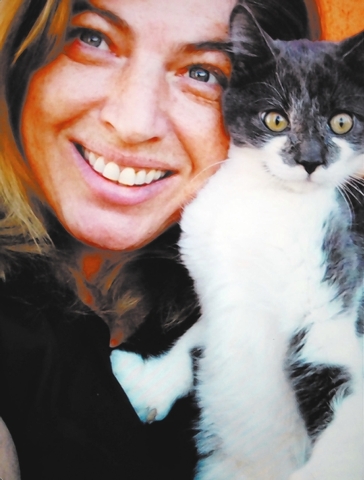 TONOPAH — “There are still a few angels left here on earth!”

That was the observation of a recent Tonopah visitor whose cat went missing and was recovered through the hard work of local animal activist Sammi Philips.

Lily Evans told her full story to the Tonopah Times-Bonanza &Goldfield News and her own words recount her heartbreak and ultimate jubilation:

“I was traveling south on Hwy. 95 recently on my way to Las Vegas. I had my two cats in the vehicle with us but they were not in a carrier.

We stopped at the Texaco Station in Tonopah for gas. When I opened my door to step out, one of my cats (Panda) shot out of the door like a bullet.

We chased after her calling out to her but she was too fast for us and she ran into the fields.

My travel partner then informed me that we had to get back on the road.

I was forced to leave her there. I was extremely upset because this cat was only three months old and she was sick with a cold and now she was on her own out in the freezing weather.

I left a flyer at the Texaco Station with my number on it.

Now in Las Vegas, I was starting to feel hopeless.

I called every agency I could find, such as the sheriff’s department, animal control, the Tonopah newspaper, etc.

It was now Friday and I was very disappointed to learn that animal control was closed for the weekend and wouldn’t open back up until Monday.

Then a miracle happened!

I got a call from a lady at one of the agencies I had called and she told me to contact Sammi Philips. She said that she was a volunteer cat rescuer for a local nonprofit organization and she may be able to help me.

I phoned her immediately.

Sammi was wonderful, she was concerned and very compassionate.

I told her what was going on and she was very quick to help. She went to the Texaco station and searched the area but she couldn’t find my cat.

She then set a trap and placed a can of food inside for her. She even went to check the trap on average a minimum of three times per day.

A few more days went by without any luck.

In the meantime, I contacted animal control people again and filed another report.

They contacted me the following day with great news. They had found her!

She went to Sammi’s food and got caught in the trap.

I called Sammi and told her my cat was picked up. Sammi asked me if it would be okay to go and pick her up. She also said she could take care of her until I could arrange to pick her up.

I feel so blessed and grateful, thank God for Sammi Philips.

My hat is off to her, she is a prenominal person who loved what she does — helping cats!”

This story first appeared in the Tonopah Times-Bonanza &Goldfield News.