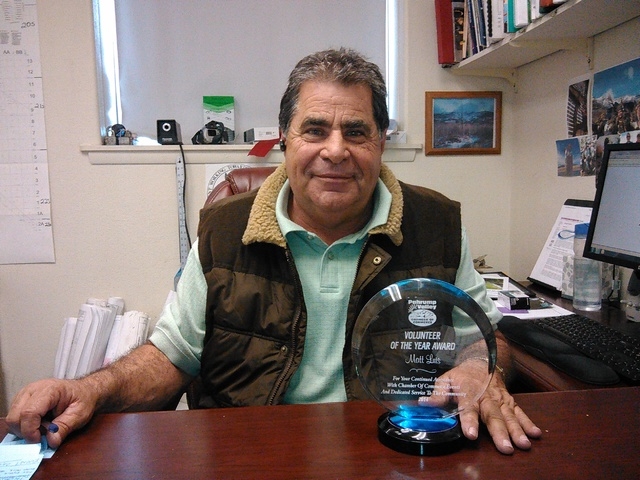 Luis was bestowed the chamber’s prestigious Volunteer of the Year award.

When talking about the citation this week, Luis was visibly humbled by the gesture.

He gave much of the credit to his buildings and grounds staff as well as other individuals in the community serving on the town’s advisory boards.

“I work with so many volunteers and they are volunteers because they care,” he said. “I know the hours they put in. We don’t really think of advisory boards as volunteers. They are the veterans, the tourism, the arena people, and the little league and soccer coaches. That is truly what makes this a big honor. It’s very special.”

Chamber of Commerce Chief Executive Officer Salli Kerr said Luis was the most obvious choice for the honor.

“Matt Luis goes so far above and beyond the call of duty,” she said. “He does it without fail for every group and it’s his love.”

With Luis oftentimes putting in 12-hour work days, Kerr, in jest, said she thought the award should include one additional person.

“When I gave him the award, I told him it should have included his wife,” she said. “The hours she gives up also, for him to be at the meetings he attends. We know that yes, he’s the buildings and grounds manager and that comes with a certain amount of work, but Matt goes far beyond that.”

Aside from his regular town duties, Kerr said Luis oversees numerous seasonal events, which take place on town property throughout the year.

“Not just us, but anyone who puts on an event in town, Matt Luis is the guy that you call to make sure you have everything thing you need, whether it be picnic tables or dumpsters. I don’t think the average person realizes how much Matt does in the community, because it’s above and beyond what he really has to do.”

As an example of Luis’ heavy work schedule, Kerr noted that the buildings and grounds manager was conspicuously absent from the ceremony where he was officially named Volunteer of the Year at the annual Chamber of Commerce Installation Dinner.

“He didn’t get to attend because he was at the Quartzsite Sports, Vacation and RV show, in Quartzsite, Ariz., delivering materials for the annual event,” Kerr said. “The tourism board goes to that event every year and there was Matt driving the trailer down there. We had a laugh during the installation dinner because it’s apropos that he not be there because he was working. I ended up taking the award to his office.”

Luis and his family have lived in the Pahrump Valley for roughly 24 years.

Come March, Luis will observe 19 years of employment with the Town of Pahrump.

On the rare occasion he’s not working, Luis said he prefers to spend his leisure time with his family.

“I have two daughters here in town and a son in Las Vegas and five grandkids,” he said. “During my off time, my wife and I go fishing in California with all the kids. We try to plan a couple of camping trips a year. We do a lot of the outdoors stuff.”