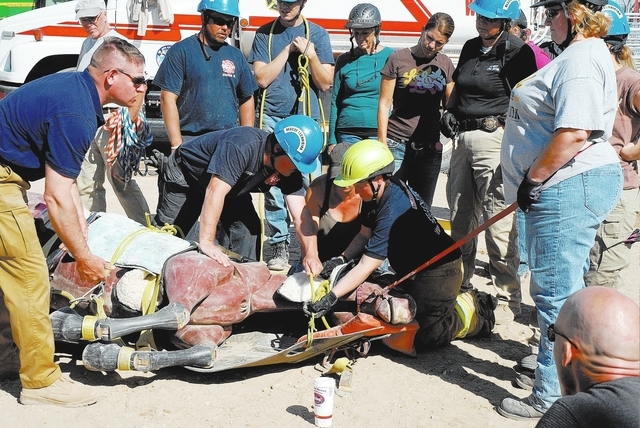 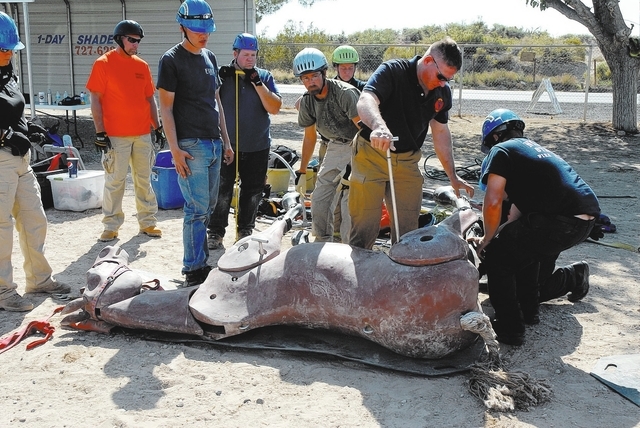 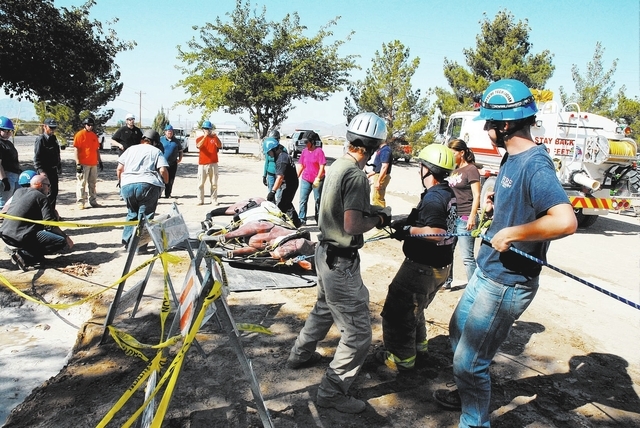 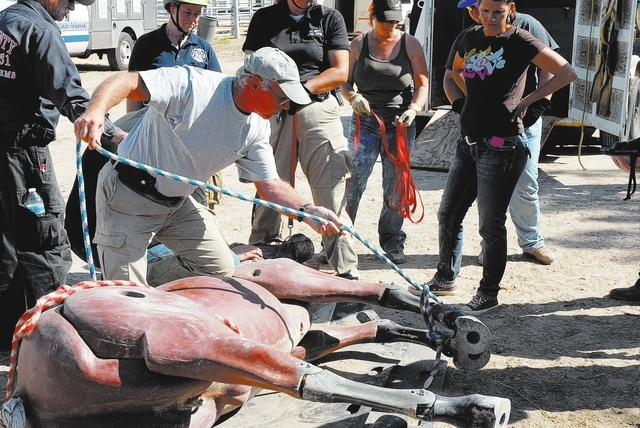 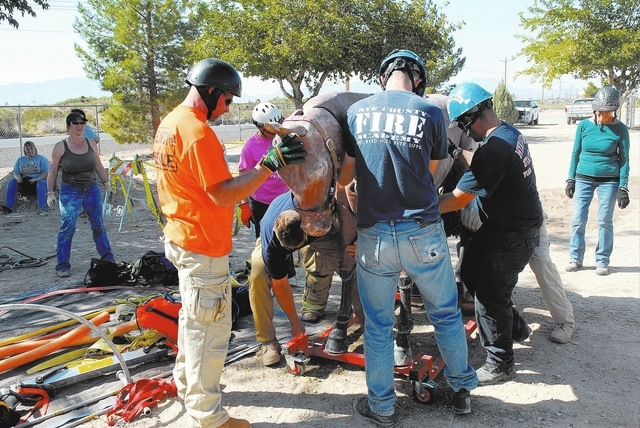 There’s a good reason why emergency organizations from around Nevada came to Pahrump for large animal rescue training. In this country, hundreds of thousands of large animals are in peril annually from storms, overturned livestock trailers and trucks, fires and heavy rains.

On Oct. 13, rescuers from Pahrump, who are also professional horsemen and part of the Southern Nevada Search and Rescue (SNSAR) team, joined 30 other professionals in Petrack Park, for Large Animal Rescue training. This particular training session featured a six foot deep, eight foot wide water and mud hole. In it was a prototype full-grown horse, stuck in the deep mud with no way out of its predicament.

So far in 2013, in America alone, there were over 30,000 big truck turnovers with a third of those carrying livestock. Here in the Pahrump Valley and the deserts of Nevada, riding in the back-country can become hazzardous if a horse runs into a patch of loose shale or herded animals get caught in a downpour that turns into a raging flood.

For the past five years, weather patterns in Nevada have caused killing fires, high winds and monsoon rains causing not only overturned trucks and trailers hauling livestock, but animals sucked into muddy clay arroyos. The mud hardens quickly when rains end and can keep an animal locked into deep mud resulting in certain death.

It was training, but to anyone witnessing the event it looked real. “It was meant to,” said trainer Michael Connell. Connell is with the Nevada State Division of Emergency Management and a member of the Army National Guard. “Everything we do is reality as close as we can make it, with everyone having an opportunity to see what it take to rescue a large animal,” he said.

Connell is from Reno, and the 30 rescuer trainees traveled from Beatty, Amargosa, Henderson, Reno and Southern Nye County Search and Rescue in Pahrump to participate in something which could save a life, even if it’s not human. “Nigel,” the look-a-like horse being rescued is appropriately as heavy as a real horse and its size is proportionate as well.

The process entailed reversing the suction effect of five feet of mud and water by circulating air and water around hooves and legs while lifting to firm ground. One rescuer noted that hoof material can dislodge in any mud, sand or clay pit that a horse or other large animal could stray into during a monsoon rain, a stormy night or other natural event.

“In real life, this is a scary and dangerous time for all concerned,” said Connell. Retrieval of the animal is all about strong people, ropes and pulley action, strength, endurance and determination, according to Connell. “The large animal is lightly medicated or tranquilized whenever possible, but it is still an activity that takes hours and hours of endurance, patience and skill,” he said.

Animals in peril, as in a wrecked animal trailer, 18-wheeler, in a fire, flood, earthquake, windstorm or sun stress from desertion, are normally highly anxious, so corralling, calming, and getting a “mechanical advantage” is imperative from the start. Rescuers use ropes, tranquilizers to limit trashing and making the situation worse, and try to get a hood on the animal to limit its visibility.

Nigel was finally out of the mud, harnessed and positioned on rubber “sleighs” to be pulled into a trailer by electric pulley by mid-afternoon. A real chain saw was fired up to simulate the sound a pulley makes with such weight against it. Six to eight trainees supported the maneuver with ropes guiding the progress, and the exercise was all but completed.

Kathy Cheney, part of the Southern Nye County Search and Rescue organization said, “It was more than I hoped for. We had the opportunity to work with some great people from different agencies and areas of expertise.” Others noted they, too, will continue their training in this field. Also attending the Large Animal Technical Rescue Training was the City of Henderson Animal Control Officer Zac Zarach who said, “I personally feel this training course is imperative.”

“You don’t have to be a horse person or in agriculture to need to know about this,” said Connell. Some of the things people learn that others can call on in distress is how to keep yourself and the scene safe while working around large animals. How to construct a vertical lift and use it. How to move an animal on a steep slope or out of a ravine, and get them out of mud and quicksand, freed from swift water, ice or fire.

“If people don’t understand horses or how to handle animals at all, they can do more harm than good sometimes,” said Connell. “Your behavior matters. Like with anything frightened or in shock your approach is everything.”

Training Officer with SNSAR Robert Tibbits talked about the value of training for search and rescue and other local agencies, like firefighters and sheriff’s office deputies. It adds more cross-training to their practical experience.

Tibbits said, “In my opinion, this training was of great value to us locally. If a member of our equestrian team was out riding and a horse fell on rock, or there was a slide, or any calamity happened like that, they would need the kind of support we have just learned, and we want to make sure our rescuers know they have a trained team around them.”

“We can always use more training, and more experience,” said Tibbits. Cheney noted that it’s likely there will be more of the large animal rescue training. “Large animals are not always in peril because of mother nature. An animal can become ill from bad feed, maltreatment, or an accident of some kind, and one person can’t be effective enough to help. For that reason, we build teams,” he said.