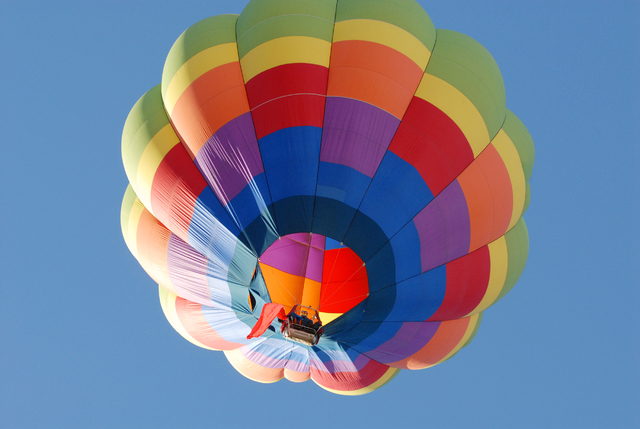 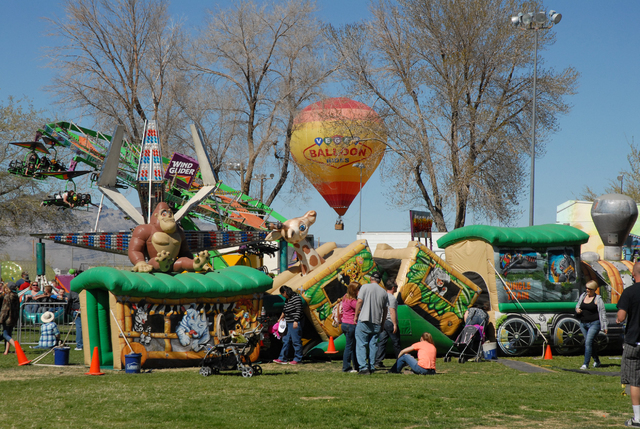 Pahrump Chamber of Commerce CEO Salli Kerr was on her computer Tuesday doing regular checks on what kind of weather conditions are expected later this month as the second annual Pahrump Hot Air Balloon Festival returns to town March 20-22.

Kerr and chamber staff are now doing last-week preparations for the three-day event at Petrack Park.

She was relieved to learn there is projected to be bountiful sunshine throughout much of the weekend, while noting balloonists are now trickling into town.

“Everything is coming along nicely and we have all of the balloonists confirmed,” she said. “We found them all rooms and we have crew members also coming in.”

“We have 27 balloons this year, so it’s a few more than last year.” she said. “As of Thursday, we have about 49 vendors coming in. We have food vendors, jewelry vendors, clothing vendors and non-food vendors. We have just about everything covered that you would want to have.”

Kerr said the chamber will continue to accept vendors through early next week, as well as those who want to sponsor a balloon for $500. Balloon sponsors earn the privilege of riding in their own piloted balloon for the entire event.

Flights last roughly 30 to 45 minutes where the balloon reaches upwards of 3,900 feet from the valley floor.

“Both mornings when they go up on Saturday and Sunday they would get a balloon ride and of course you can give the balloon ride to a staff member, family member or yourself of course,” Kerr said. “We have a couple of sponsorship spots that are still available.”

The chamber CEO also said locals can still experience balloon flights throughout the day without a sponsorship for $10.

Kerr noted that the day starts early and crews will actually begin inflating the balloons at the crack of dawn as the balloons perform better when temperatures are moderate.

“It might even be closer to 7 a.m. to get the balloons filled up but you don’t want to be any later than that because it has to be cool enough for them to go up on that morning and there’s also less wind in the morning.”

As a bonus this year several of the balloon pilots plan to visit local schools, allowing students the opportunity to learn about the sport of hot air ballooning.

A majority of the balloonists are coming in from Colorado, Utah and Arizona.

Kerr said she has yet to decide whether she will take a ride.

The second annual balloon festival features something new this year, as local residents have the opportunity to display their artistic skills for prizes.

For their effort festival organizers will use the art to promote next year’s event.

“We have had a balloon coloring contest in the Pahrump Valley Times for the last two weeks,” she said. “There will be some prizes for the younger groups but we also want the teenagers and older folks that are computer adept to submit graphic designs because they will be designing the t-shirt for next year. I think that young kids’ coloring contest entries would be beautiful inside the Bob Ruud Community Center for all the pilots to see.”

Kerr said the balloonists began arriving in town early this week, while noting the event will easily boost the local economy as upwards of 4,000 attendees are expected for the three-day event.

The festival has the potential to make a huge economic impact for area businesses.

As an example, the Great Reno Balloon Race estimates a yearly average attendance of 150,000 where it began with 20 balloons in 1982.

The event was created to keep visitors in town between the Nevada State Fair and the Reno Air Races.

“People actually started coming into Pahrump for this event as early as Tuesday,” she said. “We see rooms here in town starting to fill up throughout the weekend. I have spoken to people who said they’re not going to get a room but they are driving in from Las Vegas that morning and they will spend all day and Pahrump.”

Pahrump’s Davis Amusements will again provide the carnival portion of the festival next weekend. Drone and fixed-wing aircraft exhibitions are also scheduled on Saturday.

The chamber was able to receive state tourism money and print 115,000 flyers to be inserted in the Las Vegas Review-Journal.

“I thought that was really great to see how you can take things and make them work together because we have saved money from the grant to print the flyer and have it inserted,” she said. “It was just really fun to watch a project come together.”