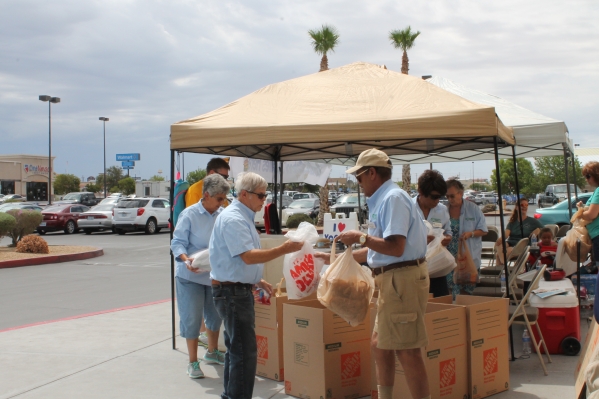 What Valley Electric Association, Inc. enjoys doing each year is raising money and school supplies for children in need as part of its Fill the Bucket Truck School Supply Drive.

“As a community-focused cooperative, we take pride in working alongside our member-owners to provide much-needed school supplies for children in southwestern Nevada,” according to a VEA statement.

Since 2007, this has been demonstrated by the association’s collection of trash container-sized white buckets and boxes overflowing with notebooks, pens, Ziploc bags and Clorox wipes, among other necessities.

“We get what (students) need. The teachers determine what works best,” said Rebecca Oscarson, key accounts coordinator for VEA.

This includes more than 500 homeless kids within the Nye County School District, according to Superintendent Dale Norton.

“If (the event) helps one student, it’s worth the time and energy,” said Norton, adding the supply drive also helps teachers. “Nine times out of 10, teachers purchase supplies out of their own pocket. It’s a circle of life because the (event’s) impact is felt all around.”

VEA staff and volunteers from the association’s 500-member ambassador program operated with the hope of topping the 31 buckets of school supplies accumulated last year, but they fell short of their goal.

“Donations from community members filled a total of 19 bucket truck liners. VEA is grateful for the community’s continued support of this event, and we recognize that other local organizations have recently hosted school donation events,” according to a VEA statement.

One such event, held this past July, was the annual Back to School Health Fair at Desert View Hospital.

“While this year’s Fill the Bucket Truck School Supply Drive did not surpass last year’s donation total, VEA is thrilled to see a number of other organizations pitch in to support students within our service territory,” added the VEA spokesperson.

Oscarson stated that support came from all directions, including the local radio station, the event venues and volunteers from VEA’s ambassador program.

Kathy Mattocks, chair of VEA’s executive committee, has served as a volunteer for the last two years.

“I recently retired, and I wanted to give back. VEA is community-focused, and I feel like I’m giving back on a personal level as well,” Mattocks said.

Mattocks and other ambassadors were there to assist members of the community who came to donate.

Some people arrived an hour ahead of the drive, according to Oscarson.

“VEA follows seven cooperative principles, including partnering with and showing concern for the community,” Oscarson said.

As a result of its latest community collaboration, VEA can now deliver the school supplies and money raised to numerous students within its 6,800-square-mile service area.