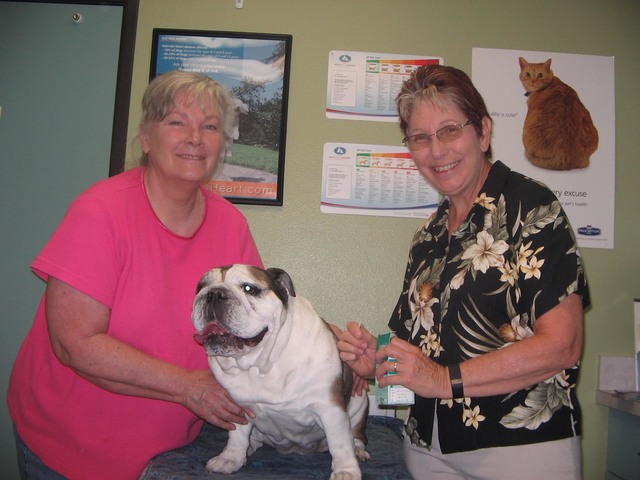 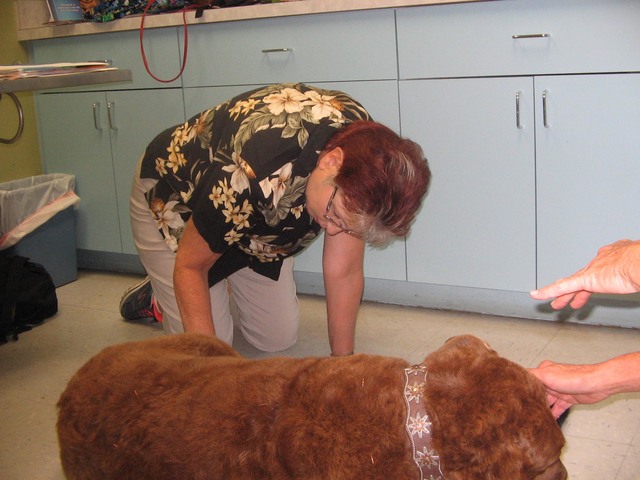 Dr. Holly Henseler, a certified veterinary acupuncturist treats Lilly, a Chesapeake Bay retriever who has arthritis in her back and has front-leg issues. After one acupuncture treatment, the dog is "doing fantastic" according to her owner. Brenda M. Klinger/Special to the Pahrump Valley Times 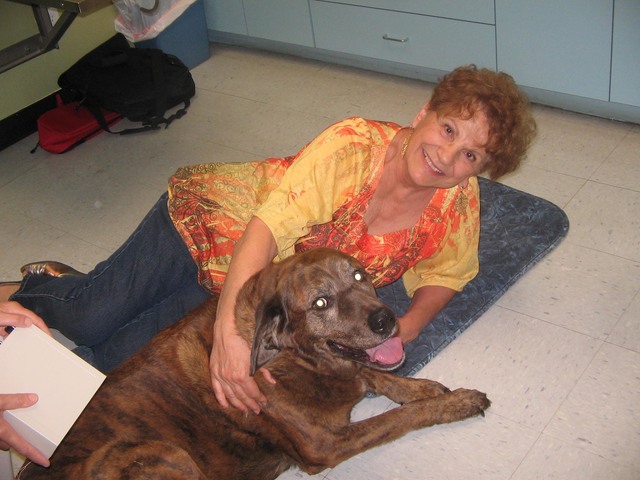 Judy Grupe with her late, beloved Max during an acupuncture treatment for his knee this summer. Since then, Max had to be euthanized for another problem he developed and could no longer live a normal life free from pain. Grupe wanted Max included in this story as a tribute to him. Brenda M. Klinger/Special to the Pahrump Valley Times 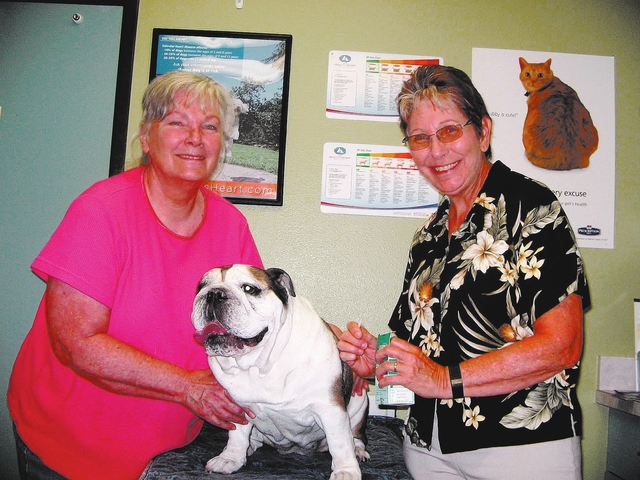 The ancient Chinese technique used for thousands of years to treat many health conditions and symptoms in people also has therapeutic benefits for animals, according to animal doctors and lovers.

The blockage of Qi can cause pain, and acupuncture can resolve the blockage allowing the flow of energy to help the body heal and restore balance.

Henseler completed her doctor of veterinary medicine degree in the late ‘80s from the University of Wisconsin. She also holds a bachelor’s degree in nursing from the same university and worked as a nurse for ten years, mostly in intensive care. She is a credentialed member of both the International Veterinary Acupuncture Society and the American Academy of Veterinary Acupuncture.

According to the American Academy of Veterinary Acupuncture, a veterinary acupuncturist must be a licensed veterinarian, and in most states it is illegal for other practitioners to perform the treatment on animals.

Henseler had to undergo an intensive training program offered through the International Veterinary Acupuncture Society for the additional certification. She studied one week a month for six months in San Diego. Henseler had to complete a case report, pass written and practical board exams and complete a 40-hour internship.

She currently limits her acupuncture treatment to dogs and cats, and no longer performs it on horses.

During the summer, this reporter was able to spend a few hours with Henseler to observe how the treatment works.

Lilly, a Chesapeake Bay retriever, had just turned nine years old before her first acupuncture treatment for arthritis in her back and issues with her front leg.

Owner Jenny McCabe said Lilly had a recent “bad spell”, probably from playing with one of her other dogs, and was having difficulty getting into a truck. She felt acupuncture would help Lilly be more comfortable.

“It is good, and it’s been around forever,” McCabe said. “I know it’s going to help her, I just know it is.”

The dog is no stranger to Henseler since she has treated her for other health issues and gently placed the special copper needles on Lilly’s shoulder to help the front leg and tendons. She also “needled” specific points for arthritis and the thyroid since the dog is on thyroid medicine.

Henseler also used an electro-stimulator unit with different frequencies to emit a small alternating current or pulse to further stimulate the targeted points along the spinal cord and strengthen the back end of the dog.

She said one of her patients, a shepherd, must think it feels like a massage and will turn around and get upset when the treatment is done.

You can stimulate an acupuncture point in other ways by using lasers, twisting the needle, bouncing, or just massaging the point can cause a response for long-term effects to benefit the pet, according to Henseler.

Lilly was treated for 15-to-18 minutes at 10 points, but the treatment time and the number of needles used can vary for each animal and condition.

Henseler said most of the pets fall asleep, get very relaxed and comfortable during treatment, which is what Lilly did.

“I take care of my girl, this is my sidekick,” McCabe added.

A recent call to McCabe confirmed that Lilly is “doing fantastic,” and she is very pleased with the results. Lilly has not needed another treatment since the summer.

Some animals may need treatments every two weeks, once a month, or may only need a tuneup a few times a year, said Henseler.

Louise Bruchman’s old English bulldog, Tilly, who is almost seven years old, has been an acupuncture patient for over a year-and-a-half for breathing problems.

Bruchman said Tilly had health issues as a puppy, and had glands removed in her neck and surgery to shorten the soft palate which helped, but she still has some breathing issues, and the acupuncture definitely helps.

“Before we started this, her eyes ran all the time,” Bruchman stated. Pointing to the creases in Tilly’s face that she said were always wet.

“She breathes much easier than she did,” Bruchman said.

“She also doesn’t snore as much, “ Henseler added.

Tilly’s breathing was fast when she came into the office, but throughout the treatment, it became much better.

Aside from the specific point to help the breathing, Henseler also hit a point on the back of the dog to keep her bladder healthy since Tilly had some bladder issues in the past.

By the end of treatment, Tilly was breathing normally, not panting and was very calm.

“Like I said, she’ll go home now, and she’ll get up on the couch and go to sleep,” Bruchman said.

Henseler agreed that sleeping is usually what most of the animals do after treatment.

Tilly, like Lilly, appeared very comfortable during the treatment, exhibiting no discomfort, even while the needles were being placed.

Henseler said some of the dogs just “relax into it”.

“Some of these big, tough dogs that come in and they lay down, they go ‘put the needles in now, it feels so good when you do’,” Henseler said.

Bruchman is a repeat client and avid believer of acupuncture and brought in other dogs for treatment, including her late West Highland terrier.

“Holly worked on him and kept him going a lot longer than he would have otherwise, you know he lived to be 16 and a half,” she said.

Henseler said it is not just for old or arthritic dogs, but there are many other conditions that can be helped including hip dysplasia, back/neck pain, skin problems, allergies, gastrointestinal problems such as diarrhea, chronic vomiting, kidney and bladder issues, neurological disorders and numerous other conditions.

Cats also get arthritis and there are other medical conditions for them that can be treated.

“Sometimes, it’s people that have tried other things, and nothing else has worked, but you don’t want to really wait ‘til the end before you try something, because I mean, even for acupuncture there’s things that are too late,” Henseler said.

She has seen many good results.

“Chihuahuas that weren’t able to stand up and walk are walking the next day; sometimes, I have had that happen. I’ve had horses do way better when they weren’t getting around that good, do real good. There’s lots and lots of things that it can work for.”

She said it can be part of any pet’s general health program, especially with the older ones. Or, it can be started when they are middle-aged, if they had an injury instead of waiting until it is old and debilitated. Even young dogs can have broken bones or knee injuries, and it can help them heal a lot faster.

However, she doesn’t recommend it for cancer treatment unless performed by a veterinary acupuncturist who is also an oncologist specifically trained on which points to use.

“The thing of it is what acupuncture does, it stimulates the energy, gets things moving in the body, if there’s a tumor that you don’t know about, it will make it grow. So, you have to be really, really careful if you’re treating cancer because you can actually stimulate it and make it worse.”

Judy Grupe has been a longtime client of Henseler who had been treating her beloved Max, a large mixed-breed with acupuncture for several months for a knee problem.

Grupe said Max was always doing better as a result of the ongoing acupuncture treatments.

“He could barely walk when she (Henseler) started,” Grupe said.

On a sad note, Max recently had to be euthanized.

According to Henseler, the dog developed another problem separate from his knee and was no longer able to live a normal life free from pain.

Despite the loss, Grupe still wanted Max included in this article as a tribute to him.

She stated in an email, “I hope your article helps other people bring their loved ones to Dr. Holly for some relief from their pain.”

She is the only veterinarian in Pahrump trained in acupuncture; clients don’t have to drive their pets to Las Vegas or Reno. There are only eight certified veterinary acupuncturists in Nevada.