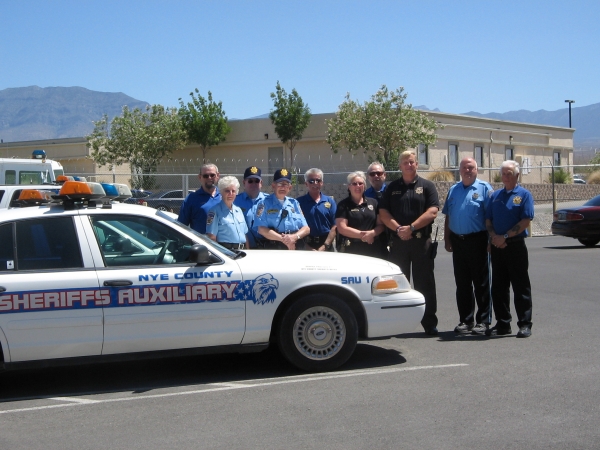 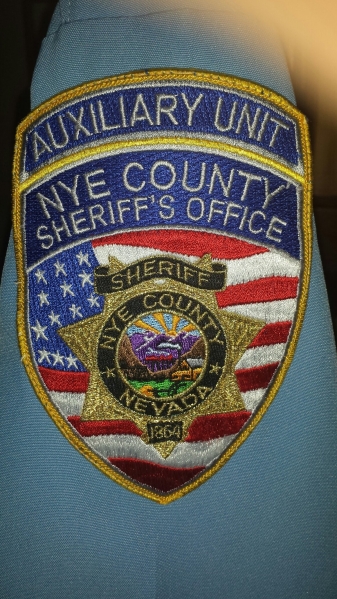 They hail from different parts of the country and bring a wealth of expertise from various occupations to the Nye County Sheriff’s Office.

The 22-member Sheriff’s Auxiliary Unit was started years ago by former Sheriff Wade Lieseke, Jr. The group was then called the Community Action Team, which the last sheriff, Tony DeMeo, changed to the group’s current name.

Members of the auxiliary are sworn officers and provide assistance to the Sheriff’s Office by serving summons and subpoenas, regulating traffic control at accidents, fires, parades, fireworks and other public events. They also conduct vacation watches and business checks. Volunteers are armed with batons, pepper spray and carry a radio to call a deputy if one is needed.

They do not, however, have the authority to arrest.

“They need us to do the job that the deputies aren’t available to do because they’re out busy doing what they’re supposed to be doing,” said Larry Snow, coordinator of the unit. “So, we’re actually taking a load off them so that they can go to the calls that need to be serviced.”

“There’s no time schedule, there’s no, ah, you don’t have to punch a time clock,” Snow said. “You come in, you do what you want, there’s papers to serve, you take ’em, you go serve ’em. Or, if there’s an accident, they’ll call you and say ‘hey, we need you for an accident.’ You pick up a car and you go to that accident and do traffic.”

Michael Miraglia joined the group about 10 years ago after learning about it from another member. He applied, took all the classes, which is between 50 and 60 hours of class time, to get certified. Miraglia now serves as the unit’s assistant coordinator.

“I thought I would be giving back to the community by doing that,” Miraglia said. “And I enjoy it, it gives me something to do once in a while.”

Miraglia added that the unit helps out at the county detention center and assists the judges in drug court by doing drug testing.

Snow said one of the hardest parts of joining the unit comes at the beginning, the FBI background check and group interview.

“Get all the information from the FBI, get fingerprinted, then there is an oral board before the members, who ask questions to see if the group really wants you or not,” Snow said. “Then you undergo training with a field training officer, just like a regular police officer to ‘learn the ropes’.”

“Well, my wife passed away and I wanted something to do and I found out about this and joined it,” Gofforth said.

Has he experienced any difficult situations while “on duty”?

“Oh, I’ve been called a few names, but that’s about it,” Gofforth said, referring to traffic control when drivers want to go their own way.

Morris “Moe” Goldner is a sergeant in the patrol section.

If someone parks in a handicapped spot and they don’t have a placard hanging off their mirror, or a license plate identifying them as handicapped, the fine is $350. The unit wants to remind residents with handicapped signs to make sure they are displayed and visible from the front of the car saving the volunteers time when checking for violators.

Goldner agreed with Gofforth that they get lots of complaints during events requiring traffic control like the fireworks.

“You learn to let it bounce off of you,” Goldner added. “You just have to talk to people and you try not to argue.”

Newcomer Mike Wells, who is still undergoing training, recently moved to Pahrump and is a former military police officer.

“In the military people are more disciplined so you really have less trouble with them,” Wells said. “But out here, you never know what you’re gonna run across and you kinda have to really train for that and kind of approach it a little bit differently than you would a soldier, so to speak.”

Another new trainee is Zona McCracken, who has an associate degree in law enforcement and is a retired child protective services worker from California. She, like all her comrades, wants to give back to the community.

Roland Benton is also a former military police officer and has worked in EMS services for police departments in Wyoming and Ohio. He said he has always been involved in community and public service.

Benton is in charge of vehicle operations and the unit has assigned cars by the Sheriff’s Office for their work. Recently, a car was converted to a “vehicle accident response unit” complete with cones, signs and the necessary equipment to save time when traveling to an accident site.

Volunteer Lester Florence described a “close call” that he and Michael Miraglia once had.

“We were out serving papers and this guy said if we come back on this property he would blow holes through us with his shotgun,” Florence said. “Well, so we left and we called (former assistant sheriff) Rick Marshall. Well, he took care of that.”

“We’re trying to get a ballpark figure of just exactly how much they do save us so that we can show the community that you, too, can come in and volunteer and help our community,” she said.

Undersheriff Brent Moody described the auxiliary as “ambassadors” for his agency who serve hundreds of court papers which takes hours. He would love to see more volunteers.

“These people work hard; they work 24 hours a day, they’re on call, they come out and help us and they’re tired,” Moody said. “They get out in the sun and it would be nice to share the wealth, so to speak, with everybody rather than just this core group of people. The more the merrier, as far as I’m concerned.”

For more information on the Sheriff’s Auxiliary Unit, call 775-751-4231 or pick up an application at the Sheriff’s Office at 1520 E. Basin Ave. The unit also oversees the neighborhood watch program which needs more volunteers too.