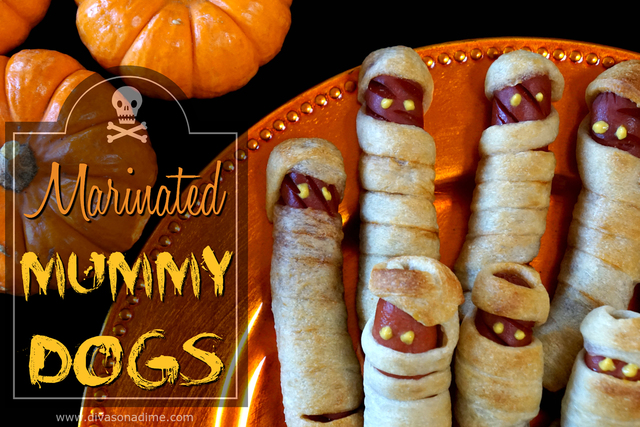 You’re probably thinking “she’s finally lost it.” Why in the world would you want to marinate a hot dog?

These sweet-savory glazed hot dogs were inspired by an Oktoberfest celebration years ago. A food cart vendor had marinated the sausages in a glaze before he grilled them. It really intensified the flavor and gave the sausage a caramelized coating that was crazy good. So, I tried marinating hot dogs in a glaze and it was a hit.

This sugar-saturated Halloween weekend it’s important to serve some protein, even if it’s just a hot dog. Protein helps keep blood sugar levels even and that means fewer meltdowns from the kiddies. Nothing sadder than a costumed kid flailing and wailing on the sidewalk.

Speaking of costumes – why not dress the hot dogs up for Halloween? They can be Mummy Halloweenies!

Combine the first five ingredients in a small bowl to make marinade.

From here you can grill or broil the hot dogs and serve as you normally would. But for Halloween let’s make Mummy Dogs.

Preheat oven to 400 degrees. Rollout your pizza dough and cut it into thin strips. Wrap each hot dog with strips of dough to resemble the wrappings of a mummy. Leaving room for “eyes”.

Place the wrapped hot dogs on a baking sheet covered with greased or sprayed aluminum foil. Dot mustard or ketchup on the hot dogs to resemble eyes. Bake for 6-to-10 minutes (depending on how thick your pizza dough is wrapped) or until the dough is golden and baked through. Let cool for a few minutes and serve with dipping sauces like ketchup, mustard, BBQ sauce or honey mustard.

I used one can of refrigerated pizza dough and it was enough for two packages of hot dogs. Alternatively, you could use prepared French bread dough or biscuit dough, pie dough, crescent dough, etc. If you’re using the smaller crescent or biscuit dough cans, you’ll have to get two cans.

Fabulous Festive Food contributed by Patti Diamond from Divas On A Dime – Where Frugal, Meets Fabulous! Website and blog – www.divasonadime.com Join us on Facebook at DivasOnADimeDotCom.