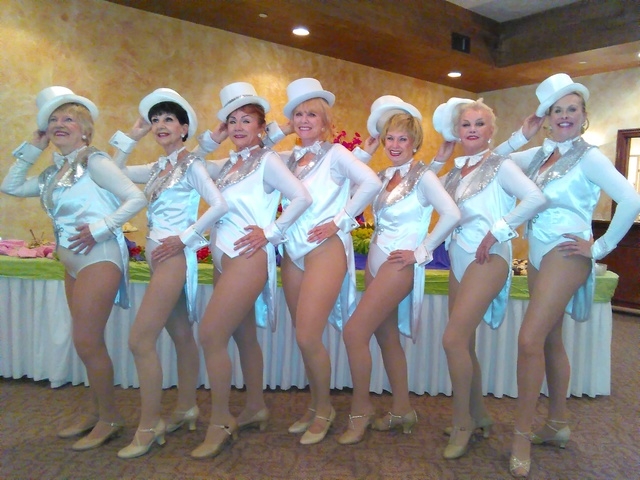 The League of Women Voters of Pahrump Valley (LWV), earned $1,200 during the organization’s first fundraiser, held after a brief hiatus.

The organization held its fifth annual Queen’s Tea to honor 14 area “Women of Distinction” at the Nevada Treasure RV Resort on Sunday.

Some of the attendees were dressed in full Victorian-era regalia.

LWV President Don Rust said he was pleasantly surprised by the turnout.

“We were not sure if enough people were going to respond because we had sent out 18 letters to various Pahrump organizations, requesting responses and nominations for women of distinction,” he said. “By constantly reminding people, we ended up selling 12 tables.”

Rust said most of the organizations he contacted were nonprofits.

The 14 deserving women were bestowed with proclamations for their respective efforts, as Rust spoke of their noble and altruistic efforts within their organization and the community of Pahrump.

“We didn’t select any of the women, it was the respective organizations that selected them,” Rust said. “I put the nomination narrative onto a form and that is what I read, which was provided by the organization. I made a certificate declaring that the woman is a ‘Woman of Distinction’ in the community along with the organization she was from.”

Along with the recognitions, attendees were treated to raffle drawings and the introduction of the Queen, impersonated by Valerie Hallam.

Those in attendance also voted for the best “Hats of Distinction.”

“We also want to publicly thank our sponsor, Nevada Treasure RV Resort, who provided the excellent facility, service, and food for the Queen’s Tea,” Rust said. “Assistant Manager Miki Bryce did an outstanding job in preparation and operations during our event.”

From the $1,200 raised, Rust said part of the funds will be used for a special program next year.

“I think we are going to set aside most of that for next year and get more for our scholarship program for a young woman graduating from Pahrump Valley High School who plans to major in either history or political science,” he said. “Right now we are not sure when the next fundraiser will be because we haven’t met as a group to figure out what we want to do. It won’t be as big as the Queen’s Tea, but no doubt it will be a lot of fun and of course, for a great cause.”

The League of Women Voters of Pahrump Valley is dedicated to ensuring all eligible voters, especially those from under-represented communities, have the opportunity and information to exercise their right to vote.

The organization shuns supporting one candidate over another and welcomes those 18 and over to join.

“We just deal with the issues,” Rust said. “We also register those who have never voted before. We help them through the process of registration and we are more of a community civic organization that is interested in the community and elections.”