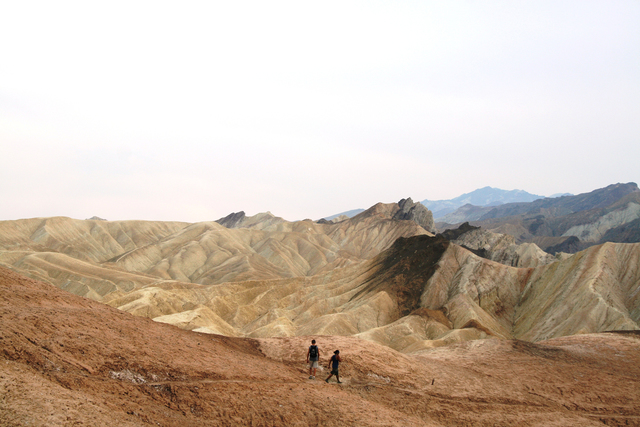 This is the perfect time of year to get over to Death Valley National Park and hit some of the badland trails. One especially suited for fall is the hike from Zabriskie Point to Golden Canyon.

This trail is usually done as a point-to-point hike starting in the Furnace Creek Badlands and finishing up 2.5 miles, and 830 feet in elevation loss later, near Badwater Road.

If you can’t arrange for one of your friends or family members to meet you at the far end, you can start from either end and hike as far as you feel comfortable, returning the way you came.

The upper trailhead is on the northwest side of the Zabriskie Point parking area, at an elevation of about 650 feet. Before you even start on the trail be sure to take the five-minute paved walk up to Zabriskie Point itself.

From here you will be able to look down on the terrain you will soon be hiking, a labyrinth of badlands. This is also one of the best places to enjoy stunning views of the Panamint Mountains to the east.

For some nine million years a lake covered this area, now known as the Furnace Creek formation. Over a million years or so deep sediments collected including saline, mud, gravel and ash. As the mountains to the west were formed, the lake dried up. Geological uplift, tilting, and erosion followed, creating the maze-like terrain of gullies and ravines you see today.

Be sure to pay close attention to the trail signs as it would be very easy to get lost in such terrain. The trail starts off downhill but over the first mile-and-a-half undulates quite a bit. But once you skirt the prominent formation called Manly Beacon it’s mostly downhill again.

This prominent point was formed from lava caprock deposited by volcanic eruptions 3-to-5 million years ago; this rock protected the layers beneath it from erosion. This feature was named after William Manly, one of the men who saved the lives of stranded and desperate 49ers by guiding them out of the area, in the incident that gave Death Valley its name.

After passing Manly Beacon the trail descends steeply. The official route heads to the left and down Golden Canyon. Here you will most likely start to see hikers ascending from the trailhead near Badwater Road, about one mile away.

But for a good side trip you could go right and head up about 0.4 miles to see an area called Red Cathedral. Here you will find steep and colorful red cliffs, their tint due to iron oxide.

Returning back into Golden Canyon you will find it has some rocky terrain but it is relatively easy hiking. Look for evidence of an old road that used to run through here. In February 1976 a four-day storm dropped 2.3 inches of rain here. A deluge of water, mud and boulders flowed through Golden Canyon, taking most of the road with it.

Even a small amount of rain can cause a flash flood in this canyon. Save this hike for another day if rain threatens.