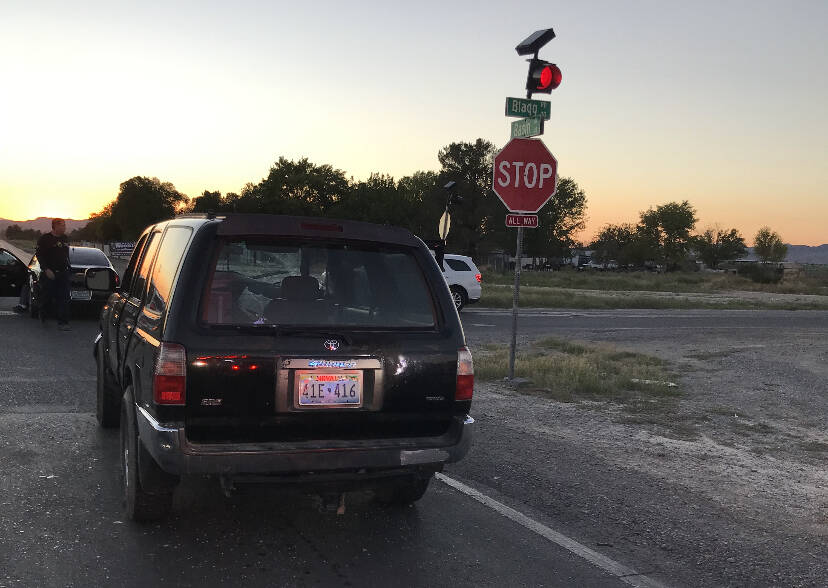 (Nye County Sheriff's Office) On Friday, Sept. 16, fire crews responded to a two-vehicle crash in the area of Basin Avenue and Blagg Road at approximately 6:40 p.m., where two patients complained of minor injuries and were treated at the scene.

Pahrump Valley Fire and Rescue Services crews responded to a series of service calls over the past week.

Chief Scott Lewis said crews were dispatched to the intersection of Idaho Street at Calvada Boulevard for a rear-end collision at approximately 8 a.m., on Tuesday, Sept. 13.

While there was no entrapment, two people suffered minor injuries but declined transport to the hospital.

Roughly a half-hour later, crews responded to a two-vehicle accident at the intersection of Wilson Road and David Street.

“We arrived on location and found the accident as reported with no entrapment,” Lewis said. “There were two patients and one of the patients was medically assessed and subsequently transported to the local hospital.”

Vehicle swept away by flash flood

Also on Sept. 13, at approximately 9:41 p.m., fire crews were dispatched to Highway 160 at mile marker 33 in Nye County for a swift-water rescue assignment.

“Crews arrived to find floodwaters across the roadway that had swept an occupied vehicle off of the roadway and through a fence and onto the desert floor,” Lewis noted. “As waters subsided, the patient was able to extricate with the assistance of NHP and make it back to the road surface where they were met by the fire department. There were significant amounts of water runoff across the roadway and quite a bit of debris left behind, but no injuries were reported.”

On Sept. 15, at approximately 12:15 a.m., crews were dispatched to the area of Charleston Park and Barney Street for a motorcycle fire, where crews arrived to find a mostly extinguished motorcycle off the side of the road.

Lewis said they arrived to ensure that the motorcycle was fully extinguished.

On Friday, Sept. 16, fire crews responded to a two-vehicle crash in the area of Basin Avenue and Blagg Road at approximately 6:40 p.m., where two patients complained of minor injuries and were treated at the scene.

On the same day, crews were dispatched for one-vehicle rollover crash at Highway 160 just north of Mesquite Avenue.

Lewis said there was no entrapment, and crews treated and released the patient at the scene.

2 flown to trauma after crash

On Sept. 18, fire crews were dispatched for a mutual-aid assignment in Amargosa Valley at the Big Dune recreation area for a two-vehicle crash with critical injuries.

“Crews arrived and found two patients,” according to Lewis. “One patient suffered a very severe extremity injury and a second one with suffered a severe head injury. Mercy Air helicopters were flown to the scene and both patients were flown to UMC Trauma.”