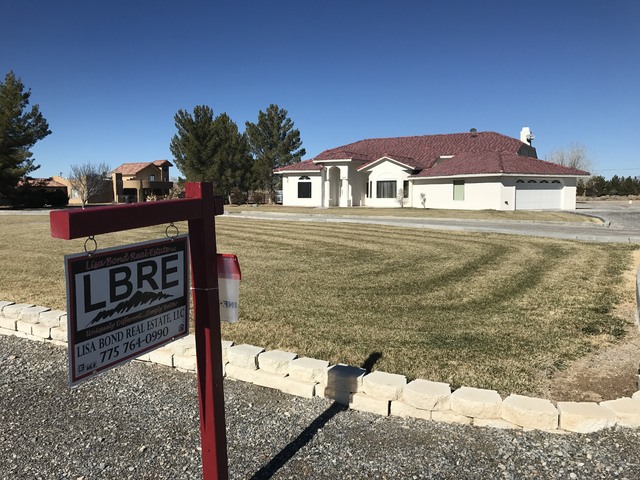 Single-family residential units like the one seen for sale here at 390 W. China Street, sold at a better pace in 2016. Pahrump saw 449 homes sold last year, up from the 409 homes sold in town in 2015. Mick Akers/Pahrump Valley Times

Pahrump saw 449 single-family residential units sold in town in 2016, marking the highest total since 2012, according to figures from the Greater Las Vegas Area Realtors.

The valley closed out the year with 38 single-family residential units sold in town at an average of $185,388, which is a 19 percent decrease from December 2015’s 47 homes sold.

”I think people are feeling more comfortable about putting their houses on the market,” Bond said. “Also, it shows that we’ve gained back some the value we had lost during the real estate crash.

“It’s growing at a nice, steady strong pace, but nothing that’s too fast.”

GLVAR president David Tina explained that the increase is also due to various benefits the region offers homebuyers.

“Even with the tight housing supply we had in 2016 and even with home prices appreciating at a healthy rate, I think people are still seeing the opportunity here,” said Tina. “Our population is increasing again because the economy is improving and people want to move here for all the reasons that have always made Southern Nevada an attractive place to live. From our warm weather to our relatively low taxes and entertainment offerings and more. Plus, our home prices are still a bargain compared to cities in places like northern and southern California.”

Those buying homes in Pahrump are a mixed bunch, according to Bond, as she has buyers from different areas and income levels purchasing and selling their properties.

“We have an eclectic mixture of buyers,” Bond said. “We have renters that are moving into the purchasing market, so they’re here locally. We have families that are upsizing. We have senior citizens that are downsizing.

“We have people coming in from all over the country, California and Las Vegas, it’s just a big mixture.”

As far as looking ahead to this year, Bond said everything points to another solid output from the real estate market, although nothing is guaranteed.

One reason Bond believes 2017 will be on par with 2016 is that the Federal Reserve increased its key interest rate by .25 percent in December. The hike marked the first time in 2016 that the interest rate was increased.

“They felt based on their economic indicators that they could raise those rates with confidence,” she said. “For people who were thinking about buying, it’s going to get them off the fence and move forward if they’re going to purchase.