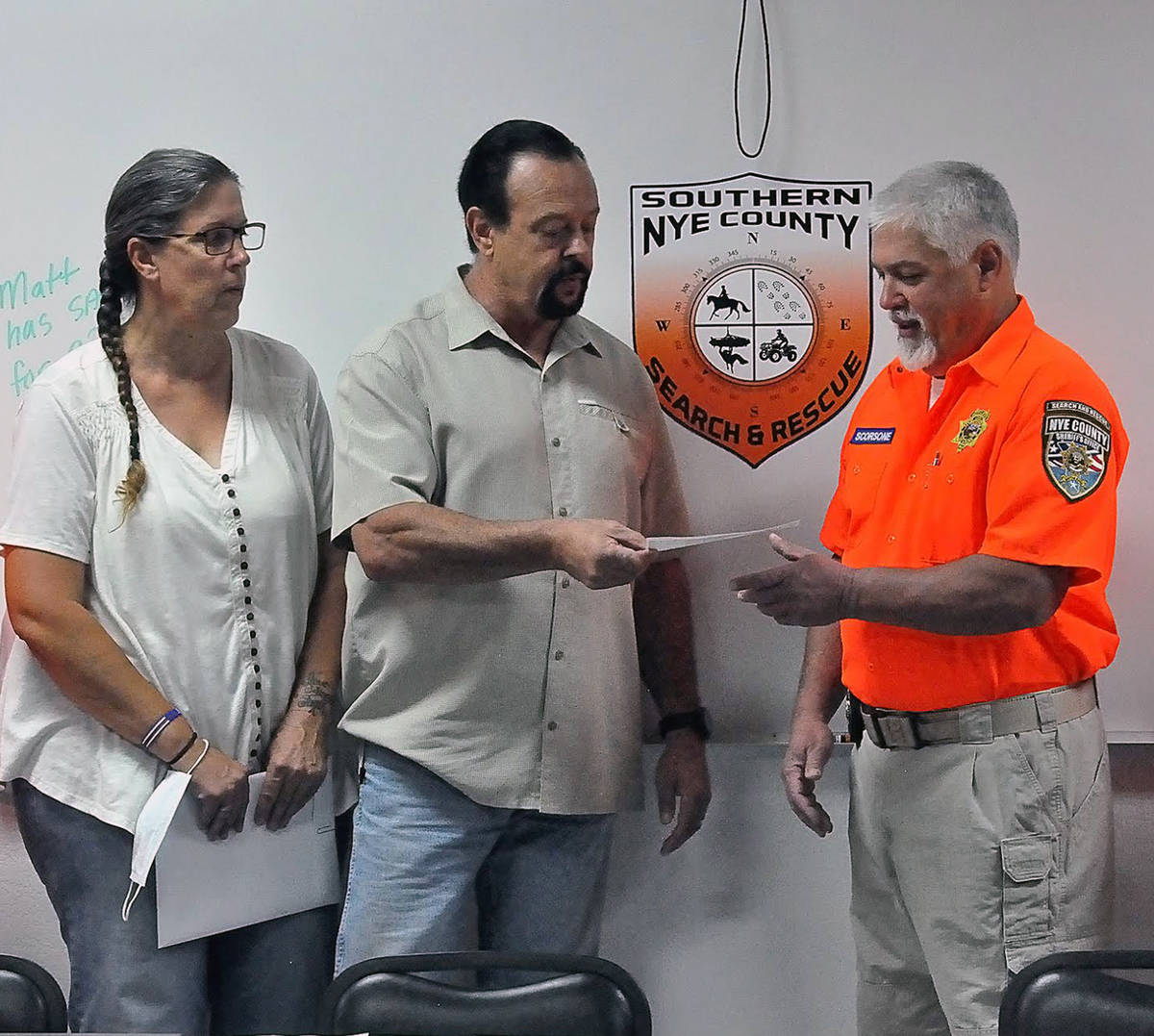 Horace Langford Jr./Pahrump Valley Times Members of the Southern Nye County Search and Rescue volunteer unit were delighted to receive a donation from Stacie and David Hiebert on Friday, July 17.

Earlier this month, local couple Stacie and David Hiebert set out on a mission. They wanted to show area first responders that despite the extreme negativity being publicly channeled toward law enforcement officials in recent weeks, there are still many people who are truly grateful for the jobs these professionals do every single day, and the results of that effort did not disappoint.

When word started making its way around the community that the Hieberts planned to hold a First Responders Appreciation Picnic to honor the brave men and women that protect and serve the communities of Nye County, others stepped forward to offer their help, both physically and financially. In fact, the amount of money raised for the event far exceeded the costs of providing a free lunch celebration for first responders, leaving the Hieberts with $2,500 in leftover funds that they then decided to donate to one of the valley’s volunteer first responder units, Southern Nye County Search and Rescue.

“Stacie and I have over 55 years of law enforcement between the two of us and thought this show of support would help the morale of our first responders. What was truly amazing was the support of the residents of Pahrump,” David told the Pahrump Valley Times with obvious delight and enthusiasm. “A lot of citizens donated money and those with little funds to share showed up and helped set up tables, chairs and decorations. Pete’s Meats and Treats catered the event and served up a lot of good food.

“Once the luncheon was over and the park was cleaned up and all the bills were paid, Stacie and I realized there was a large sum of donation money left over. Stacie and I had talked about the possibility of excess funds and had decided to donate the remaining donations to the Southern Nye County Search and Rescue,” David continued. “We thought since the Search and Rescue Team are first responders that rely solely on donations, that would be a great way to donate the remaining funds.”

That’s one of the reasons that the Search and Rescue team was so thrilled to have the timely donation from the Hieberts and the local community members who are thankful for their readiness to respond in the event of an emergency.

“We were delighted to receive this donation,” Southern Nye County Search and Rescue Commander Jim Scorsone said following the check presentation on July 17. “This is a huge shot in the arm for Southern Nye County Search and Rescue. Due to COVID-19, all of our fundraisers have been canceled and since we rely on donations to maintain our equipment and supplies, this will help us through the rest of the year.”

Scorsone said the Search and Rescue crews have been quite active this year in assisting the Nye County Sheriff’s Office with patrols and searches in both Nye and Inyo counties, so the donation will go a long way toward helping to replenish the organization’s supplies and move the group forward on projects and improvements that have been on hold.

“We would like to send out a big thank you to Stacie and David Hiebert for organizing and putting on this benefit and the people of the Pahrump Valley for their continuous support,” Scorsone said in conclusion.

This is not the end for the Hieberts and their effort to show appreciation to first responders. The couple told the Times that they have plans to travel to the Tonopah area as well, so they can hold a First Responders Appreciation Picnic event for those who reside in the northern portions of the county too.