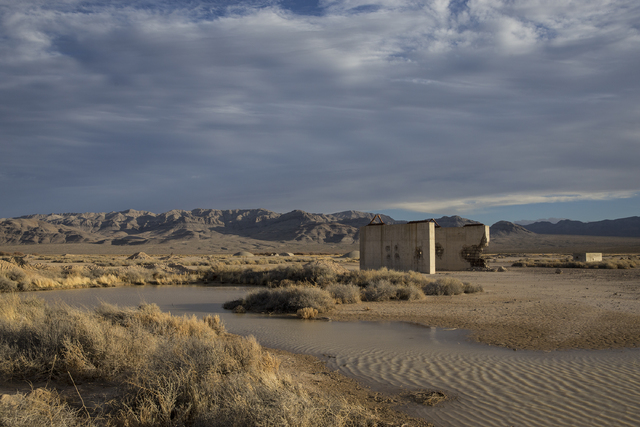 Benjamin Hager/Las Vegas Review-Journal The remains of a bridge built to measure the effects from the 1957 nuclear detonation test Priscilla at Frenchman Flat. Photo taken Wednesday, Jan., 11, 2017, at the Nevada National Security Site, in Mercury, Nevada.

A night earthquake struck this week on the Nevada National Security Site in Nye County, the U.S. Geological Survey said.

The 4.1 magnitude earthquake at 2:27 a.m. Monday was centered about seven miles northeast of Mercury and 4.2 miles below the surface, geophysicist Julie Dutton said.

No injuries or damage were reported, the Geological Survey said.

Ken Smith, a seismic network manager at University of Nevada, Reno, said that the earthquake occurred on the eastern side of the Nevada National Security Site in the area of the Spotted Range.

He said the area has had earthquakes in the past.

Since 2010, there were five earthquakes of magnitude 4 and 5 in Southern Nevada including the Monday one, Smith said.

“Most of those are very small and not felt by anybody, but our seismic network is very sensitive,” Smith said.

Mercury is about 30 miles north of Pahrump and about 70 miles northwest of Las Vegas and it’s also about 33 miles southeast of Yucca Mountain.

Smith meanwhile said that the area is located “pretty far away” from Yucca Mountain on the eastern side of the Nevada National Security Site.

“An earthquake of this size wouldn’t cause any damage or impact to Yucca Mountain,” Smith said.

Data indicates there have been 621 seismic events of magnitudes greater than 2.5 within a 50-mile radius of the mountain since 1976, it said.

The most significant earthquake occurred about eight miles southeast of the Yucca Mountain site with a magnitude of 5.6 on June 29, 1992.

It damaged a nearby Department of Energy field office building, the website said.