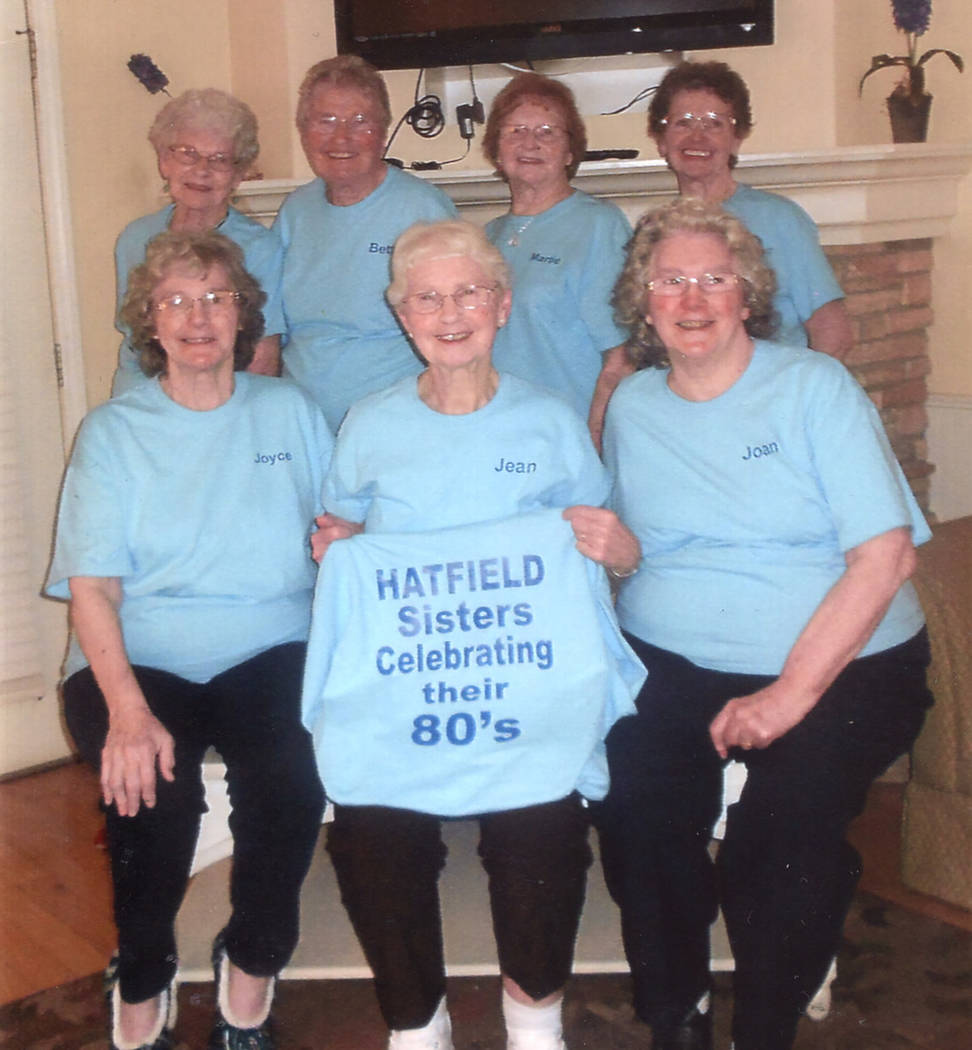 Special to Pahrump Valley Times Pahrump resident Betty Heil, second from left rear, is joined by her six sisters who are all in their 80s, held a recent family reunion in Branson, Missouri. The sisters attribute their longevity to simply ‘living a healthy lifestyle.’ Sadly, their mother died at age 37, due to complications during childbirth.

While that is a not very rare in this day and age, Heil relayed a remarkable story about her family.

She and her six sisters, born with the surname Hatfield, were all octogenarians for a period of time this year.

Additionally, they are all mothers of at least two children, obviously now adults.

To celebrate the milestone, Heil said the sisters recently took a road trip to Branson, Missouri.

“The trip was arranged by my nephew from Ohio,” she said. “We have a family reunion every summer in Fredericktown, Ohio, but it was just the sisters and we went to Branson, Missouri. The driver was our nephew and he brought along his wife in a 12-passenger van. He arranged for us to see five different shows while we were in Branson. He was most generous with us old women. Branson, Missouri was very enjoyable. We left from Columbus, Ohio at 6 a.m., and it took us 12 hours to get there.”

As for the sisters’ longevity, Heil simply said they all lead healthy lifestyles.

“None of us really have a special diet that we were on, but I do take flaxseed every day,” she said. “I think we attribute our longevity to basic healthy living, and we don’t overdo much of anything even though we all love food. Myself and my sisters are now all widows. The youngest, Georgia, was the last to become a widow. So far, we have maintained our health and all of us live alone.”

Heil noted that their mother died at age 37 from complications during childbirth.

The Hatfield sisters also have four brothers, one of which is still living.

“He is also in that 80-year age group too, but he doesn’t wear skirts so he doesn’t count,” she said with a laugh. “My other three brothers have since passed away, as well as an older sister. We all try to keep in touch on a regular basis. We don’t call each other every day, but more like once a month.”

As far as any Mother’s Day plans for this Sunday, Heil said she’s going to lay low.

“I don’t have any plans for Mother’s Day this year,” she said. “Two of my kids live up in Salt Lake City. I was just with one of them recently, so I think I had an early Mother’s Day.

Heil, a 10-year Pahrump resident, and self-confessed “snowbird,” moved to town due mainly to the weather.

“We were snowbirds from Montana where we lived out in the country,” she said. “Montana is not best place to live alone, especially during the wintertime. I really liked it down here with the weather and I really enjoy golfing. I was also in the National Senior Olympics two years ago. I threw the shot put and the discus and I earned a gold and a silver medal, but I think I’m done with that now.”

Though the group of ladies thoroughly enjoyed visiting Branson, Heil said she and her sisters would like to visit a city on the east coast.

“I think it’s worthy of a trip to New York City,” she said. “I think it’s unusual that we all are in our 80s now, and we are sisters. Of course, everybody’s living longer nowadays. Every one of us has at least two or more children.”