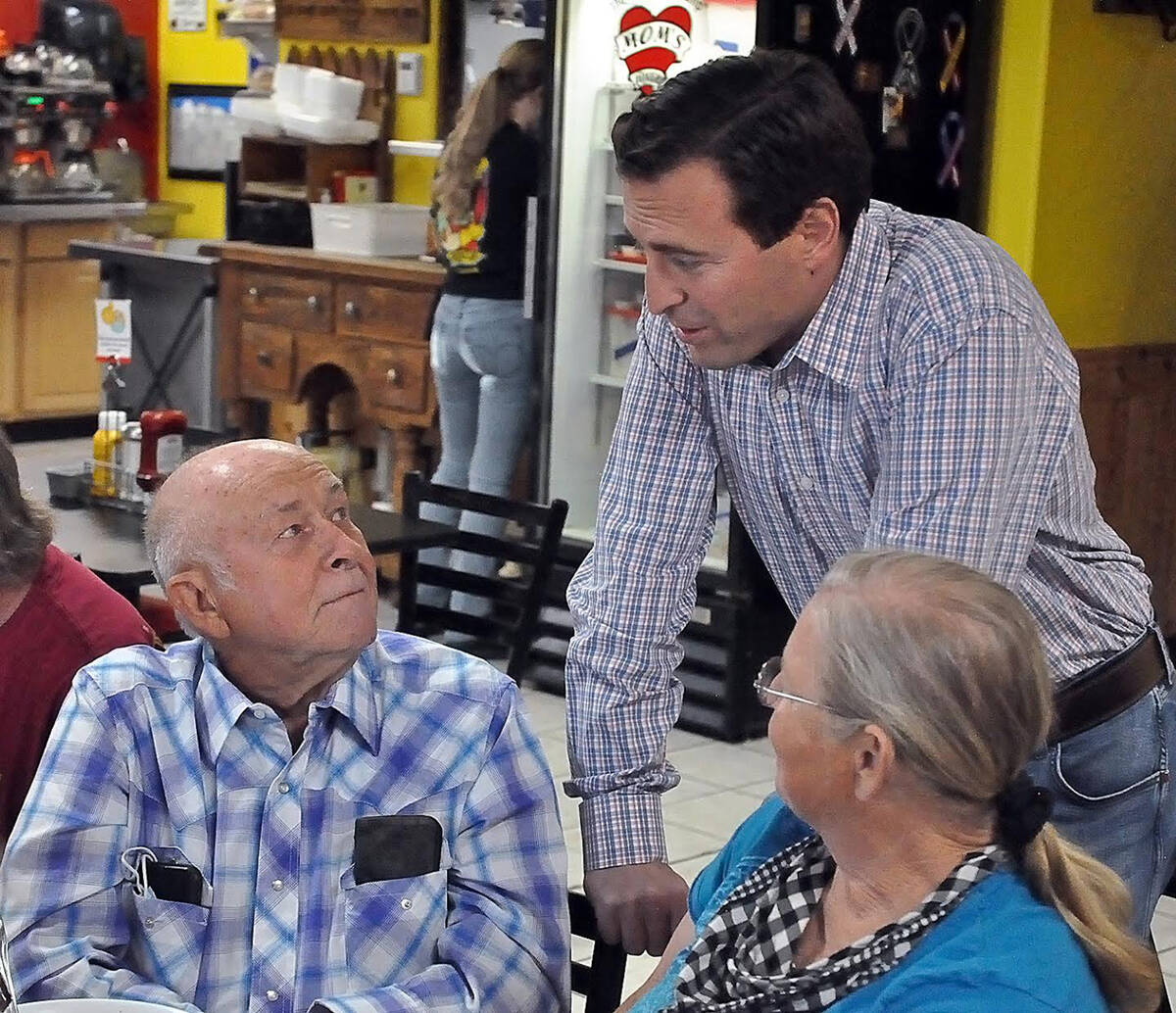 Horace Langford Jr./Pahrump Valley Times Republican contender for the 2022 U.S. Senate race, Adam Laxalt made a trip to the Pahrump Valley on Thursday, Oct. 7 and spent some time chatting with locals about his bid for office. 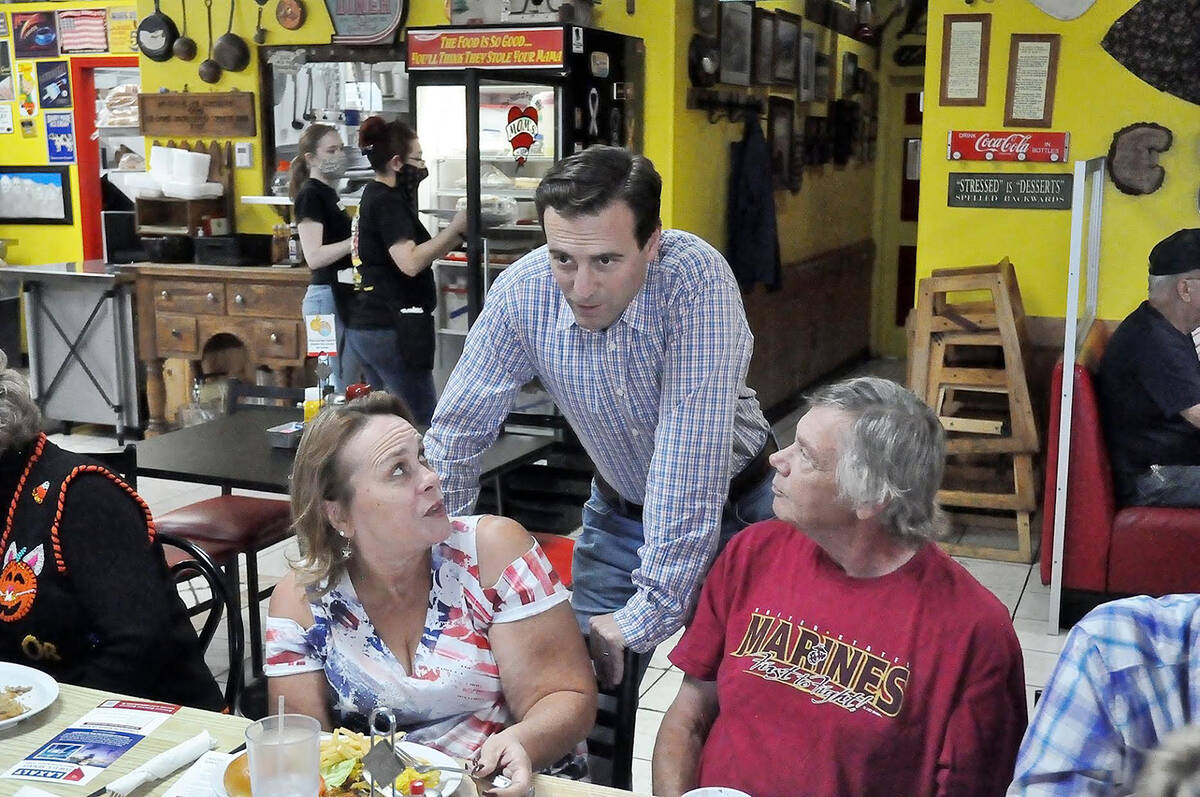 Horace Langford Jr./Pahrump Valley Times Mom's Diner was packed with patrons on Oct. 7 and U.S. Senate candidate Adam Laxalt said he made sure to take a few minutes to speak with each of those in attendance that evening.

“It was great, it’s wonderful to see so much support out there,” Laxalt told the Pahrump Valley Times following his campaign visit. “The diner was full that evening, we had great attendance there. I had a chance to speak to every single person and I think people are ready to support a candidate who has already fought for them. I’ve already proven myself as a conservative leader, both as a former attorney general and in my support for President (Donald) Trump in 2020. I think they are ready for a red year and are hoping, like we all are, that we’re going to win some important statewide races in Nevada and try to flip our state red.”

Laxalt is the former Nevada attorney general, having served from 2015 to 2019 and he will be going up against another former top lawyer for Nevada, current U.S. Senator Catherine Cortez-Masto, who served as Nevada attorney general from 2007 to 2015 and has held the post of senator since 2017. Laxalt noted that Nevada is one of those states that often swings back and forth and he believes that 2022 will see Nevada come out more red than it has in recent years.

“We were red in 2010 and 2014, then in 2016 and 2020, those were really close blue years,” Laxalt said. “It’s a slightly blue-leaning but very close swing state, and so we tend to go with these national environments. And I think we’re going to have a good year, I think we’re going to win our race and win a lot of Republican races across the state.”

Laxalt said this belief is derived from his discussions with those who would be his constituents if he were to be elected next year, all of whom are harboring some grave doubts about the course that America seems to be on.

“What I’m seeing as I travel, both there in Pahrump and across the state in the last two weeks is, people are incredibly fired up. They are angry and they are scared of what they are seeing happening to our country but it looks to be translating into people being upset and wanting to find a way, through the ballot box, to tell (President Joe) Biden and my opponent, (Catherine Cortez) Masto, this is not the direction they want our country to head in,” Laxalt explained.

He said that like many other people in the nation, he watch the happenings of 2020 with incredulity, lamenting occurrences such as the Black Lives Matter riots, government overreach in terms of the COVID-19 pandemic and what he characterizes as a massive lurch to the left, and these are the sort of instances that really pushed him to throw his hat in the ring for 2022.

“I just want to be part of saving our country,” Laxalt replied when asked why he’d selected the U.S. Senate seat to pursue. “I just want to make sure Nevada has a voice, a real conservative voice who can represent our values, which is something we do not have in our electeds right now, that’s for sure. But we have a real chance to be the 51st United States Senate seat for Republicans and to put a brake on this leftist agenda that we’re seeing come down the pike. It’s a really important race for our state and a really important race for our country.

“People are so worried about what’s happening with our country and there is no better place to speak out and fight against cancel culture and open borders and a lot of these really dangerous trends for our country and our democracy than United States Senate,” Laxalt continued. “I feel I can be a large voice for those issues and can speak for people who have no voice right now. Being willing to stand up for them, stand up for Nye County, other rural counties and our rural values, that’s something I did when I was attorney general and hope to do in the United States Senate.”

As to specific goals that Laxalt has in mind for the future, he remarked that his biggest priority is throw the balance of the Senate to the Republican side, giving it the leverage it needs to halt bills of concern in their tracks.

“First and foremost, I look forward to being the 51st vote to stop the left’s radical shift in Washington. They are trying to do a combined $5 trillion of spending. This is massive, big, socialist-style spending bill and they are not shy about it,” Laxalt asserted. “They say they want to radically transform our economy and our system of government and they don’t have that mandate. As you know, right now it’s a 50/50 split in the Senate and so the I want to be that 51st vote to push back against these kinds of policies. People are worried about the electoral college being scrapped, the Supreme Court being expanded, so being a conservative who is going to stand against those kinds of things for Nevadans is incredibly important.”

Laxalt concluded by stating that the nations’ Democratic leaders have been slowly but surely stripping away the rights of Americans over the last generation and he believes it has now come to a tipping point.

“Sometimes it hits you right in the face and sometimes people don’t realize they are losing their rights, but I think people are finally awake,” Laxalt said. “If we let them destroy the constitution, then the basic building blocks that we all rely on will be gone and this is not going to be a country that a lot of us are going to recognize. It’s now or never, it’s go-time to save our system and to defend our constitutional values.”