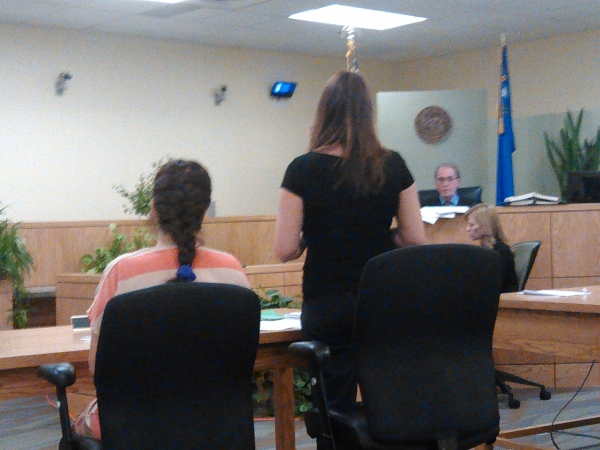 Two local defense attorneys have joined in the effort to remove Pahrump Justice of the Peace Ron Kent.

Their decision was based on the belief that Kent failed to meet his educational requirements, as set forth by the Nevada Supreme Court.

This week, Chamlee explained her reasoning for filing the joinder.

She noted that the Nevada Supreme Court mandates that all justices of the peace and judges have to complete what’s called the Mandatory Ethics Course at the National Judicial College in Reno.

“When I reviewed Judge Kent’s transcripts, I noticed that he did not complete the course,” she said. “The Nevada Supreme Court says you have 24 months from the date of election or appointment to complete the course. Judge Kent was elected in November of 2012 and he took office in January 2013, so it’s been almost three years since he was elected.”

Contained in Earnest’s original order of recusal, filed on Sept. 8, the attorney explains by virtue of his action, he feels Kent’s impartiality would “be reasonably questioned” if Kent were to preside over any cases in which Earnest appears as counsel, a point which Chamlee is in agreement.

“I have filed my own separate writ under the same case number, asking the district court to make rulings on this because Judge Kent’s failure to recuse himself off of my cases is going to create serious problems for my clients, especially those that are in custody.”

Earnest, meanwhile, said he suspects additional attorneys may follow suit, while noting Kent’s absence from the courtroom in recent days.

“Mr. Arabia has joined in and I’ve heard other lawyers were going to join as well but I don’t know if they have or not,” he said. “I certainly wouldn’t tell them what to do. I was told Judge Kent was on a medical leave of absence and that’s public record. I have no idea why or what his condition is.”

Chamlee declined to talk about her professional relationship inside the courtroom with Kent, even though Earnest last month, said he questioned some of Kent’s rulings on cases he’s defended since Kent’s election in 2012.

“I’m not at liberty to say or discuss Judge Kent’s demeanor while presiding over cases,” Chamlee said. “I cannot confirm or deny anything about what I have observed in his courtroom.”

Laura Bogden, executive director of Nevada’s Board of Continuing Legal Education (CLE) said all attorneys in Nevada, whether it be an attorney, state judge or justice of the peace, have the same CLE requirement, 12 total credits per calendar year.

“The only difference is that state judges and justices of the peace do not have to pay an annual $40 fee,” she said. “There are a few waivers such as military, federal judges, and hardship exemptions that need to be approved by our board on a case-by-case basis.”

Bogden also said when attorneys, state judges or justices of the peace are non-compliant, they are assessed late fees and/or suspended.

“I am not aware of any state judges or justices of the peace that have been suspended,” she said.

Earnest surprised many in the courtroom last month when he informed Kent of his intentions, just moments before the attorney was to represent a client on a DUI charge.

“There are some housekeeping issues that we need to do that are unrelated to my client, but related to me and you, your honor,” he said. “I made a request to the administration of courts for your judicial education records. It is my belief that you have failed to meet the requirements as prescribed by the Nevada Supreme Court, rule 251. If that’s the case, judge, I’ll be seeking your removal from the bench.”

Unstirred by the action, Kent noted he wanted to expedite the issue to avoid delays on other cases.

“I think the best thing to do is to reassign this to Department B and you can continue your representation on this case,” Kent said. “I want to try to do this in the most cost-efficient manner. That leaves us with the issue of your client still in custody.”

Outside the courtroom, Earnest took a cautious tone while explaining the sensitivity of the issue.

“Because this is an ongoing investigation, we have to be real careful,” he said. “We want to be ethical and we don’t want to run afoul of anybody or any rules. I have never filed a writ of recusal, so this is uncharted waters for me because I have never been in this kind of a situation.”