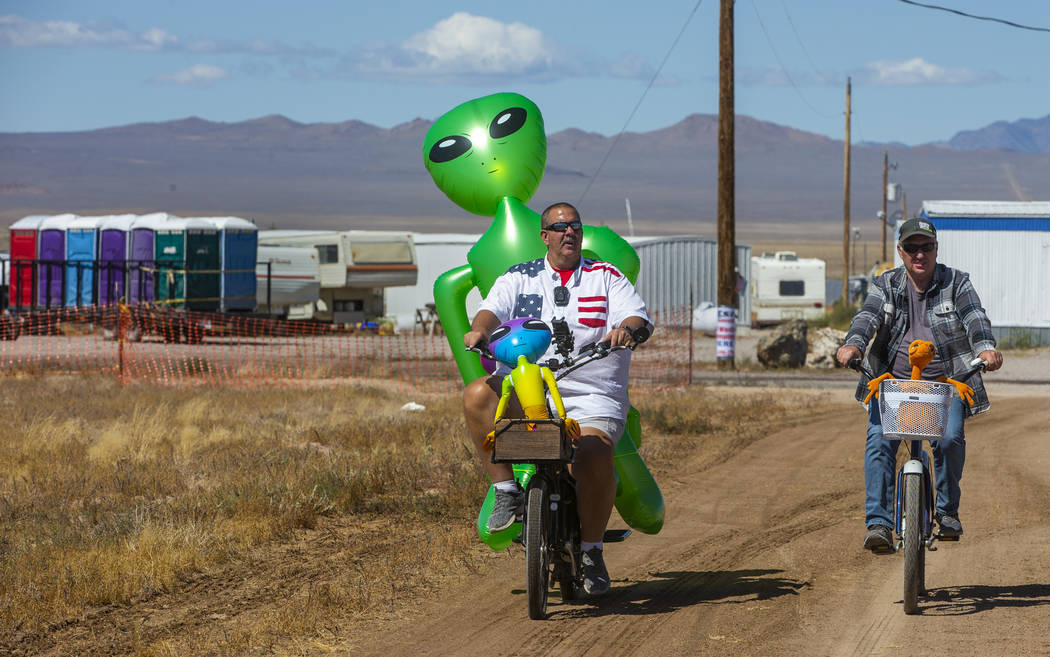 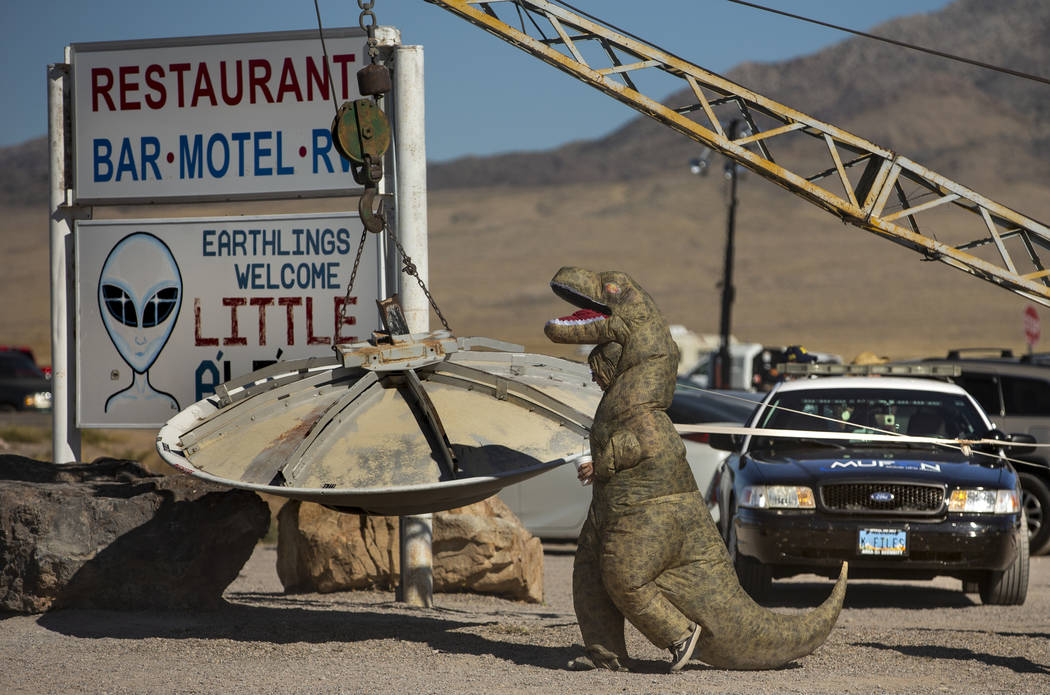 A T-Rex costumed festivalgoer walks over to the flying saucer outside the Little A'Le'Inn during the Alienstock festival on Saturday, Sept. 21, 2019 in Rachel, Nevada. (L.E. Baskow/Las Vegas Review-Journal) @Left_Eye_Images 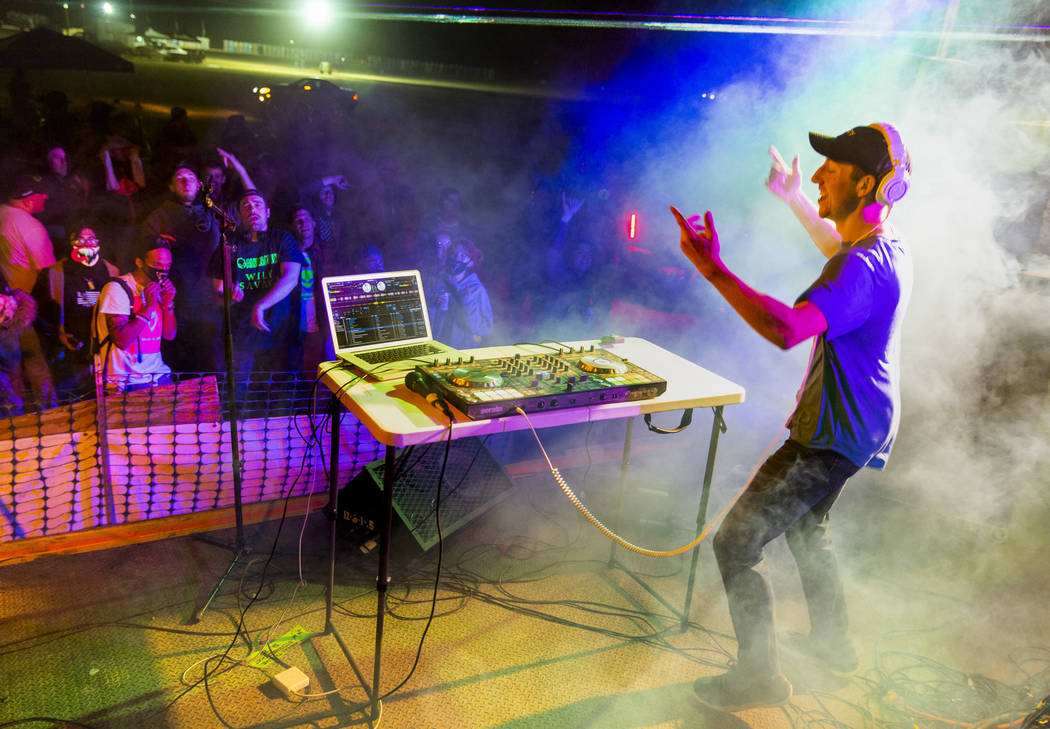 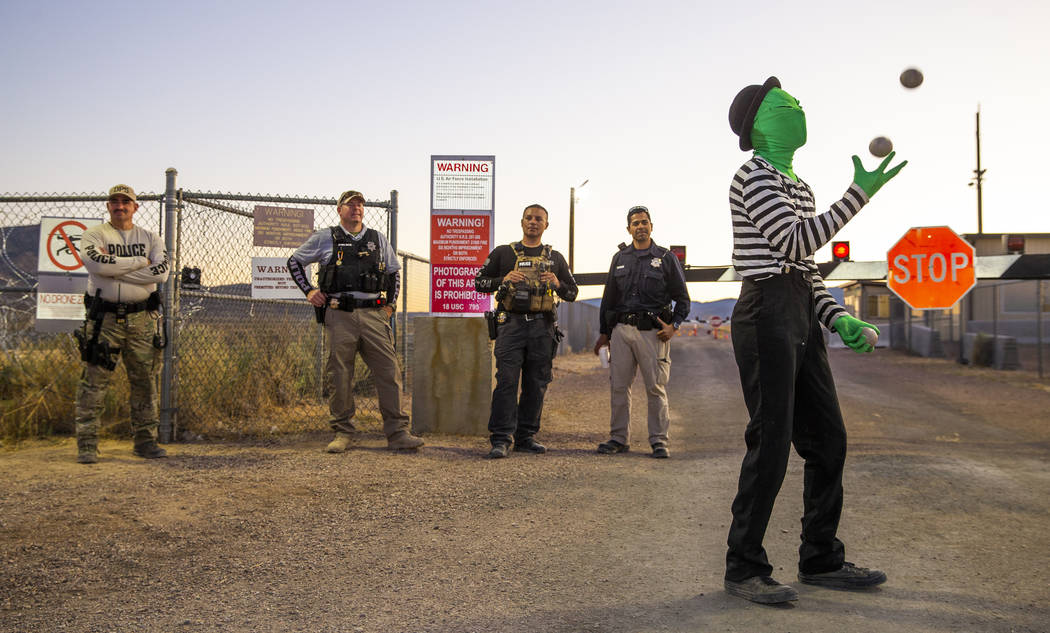 Scott Samford of Hollywood as an alien juggling mime entertains the security personnel at the back gate of Area 51 during the Alienstock festival on Saturday, Sept. 21, 2019 in Rachel, Nevada. (L.E. Baskow/Las Vegas Review-Journal) @Left_Eye_Images 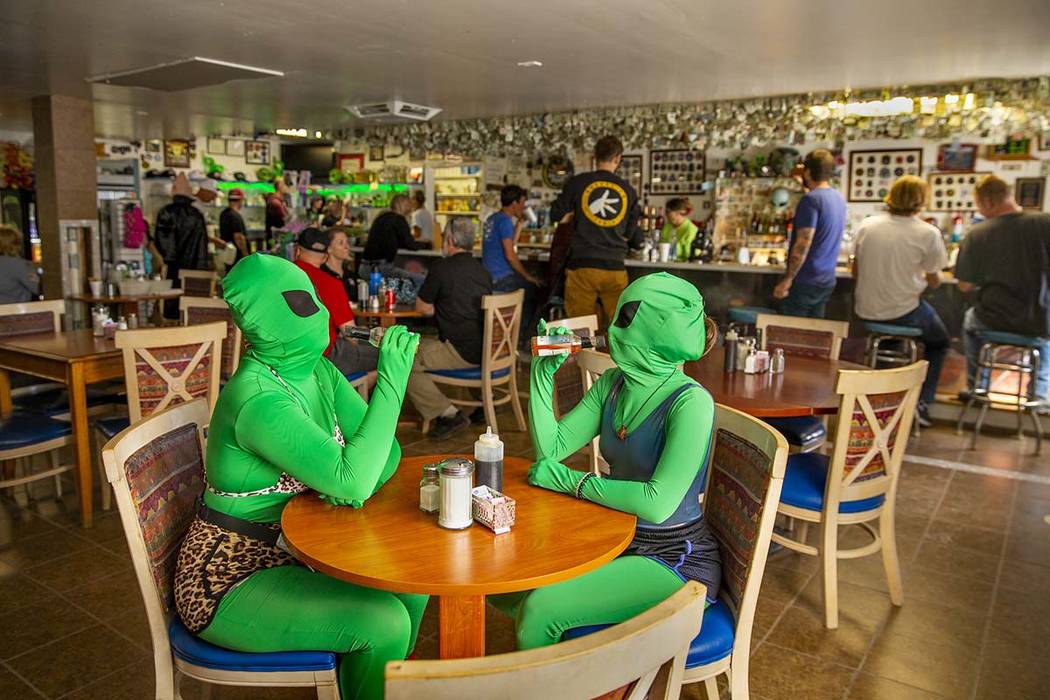 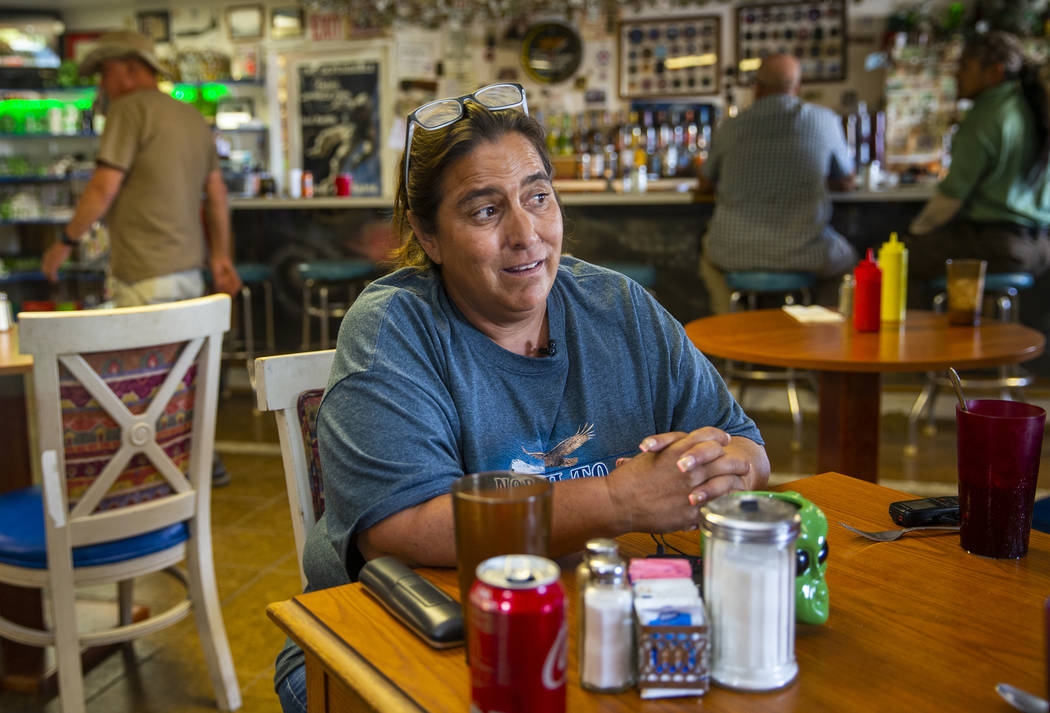 Connie West with the Little A'Le'Inn in Rachel along the Extraterrestrial Highway/State Route 375 talks about the place being a gathering site for the upcoming Alienstock festival on Tuesday, Aug. 27, 2019, in Rachel (L.E. Baskow/Las Vegas Review-Journal) @Left_Eye_Images

After attracting thousands of extraterrestrial fans from around the world to a rural Nevada desert town, Alienstock organizers are preparing for a second go-round.

Owners of the Little A’Le’Inn, a restaurant and motel in Rachel, announced the dates for Alienstock 2020, listing on its website that the second annual festival will be Sept. 10-12.

However, Lincoln County emergency manager Eric Holt said some county commissioners are concerned about allowing another Alienstock to take place, given the large county response and financial aftermath associated with the first one.

“Some of the Lincoln County commissioners have voiced their concerns with it and have requested a resolution in nonsupport of an Area 51 event that would require any support or response on behalf of Lincoln County,” Holt said. “Permits last year were approved in an effort to give order to the chaos and assist in the planning of such an unknown event. It worked well, and we were well prepared to handle any situation.”

Last year’s event was created after a viral Facebook meme to storm the gate of the secretive Air Force base commonly known as Area 51 — long rumored to house extraterrestrial technology — to “see them aliens.” The Area 51 Basecamp event at the Alien Research Center in Hiko was also created in response to the attention the meme received.

The meme’s creator, college student Matty Roberts, initially signed on to be part of the Alienstock event, before pulling out, citing safety and infrastructure concerns. Roberts went on to host an alien-themed party in downtown Las Vegas.

Roberts and his group, Hidden Sound LLC, and Little A’Le’Inn owner Connie West are now in a legal battle for the Alienstock name.

Their case is slated to be heard in a bench trial in District Court beginning next February, according to court records.

On the final day of Alienstock 2019, West mentioned her desire to hold the event again and said she already had someone book a room at the Little A’Le’Inn for the event. She could not be reached for comment Monday.

Alienstock, which featured various music acts, food vendors and activities, saw a peak attendance of about 3,000 festivalgoers, although law enforcement and first responders were ready for a crowd of up to 30,000 people spread between Alienstock and Area 51 Basecamp, according to Holt.

The event centered around a group gathering at the back gate of Area 51 near Rachel at 2 a.m. Sept. 20, where around 100 people showed up and chanted and had fun with law enforcement officials.

The festival went off without major incident, with a total of six arrests occurring at the two Area 51 gates over the four-day event, five for trespassing and one for indecent exposure.

Lincoln County signed a declaration of emergency and is looking to get around $200,000 from the state to help cover the costs of overseeing the pair of alien-themed festivals.

Gov. Steve Sisolak didn’t seem too eager to provide the county with any money, saying he didn’t know why the state would have to bail the county out after it approved the two events.

Lincoln County officials are aware that West wants to stage another event and asked that the commission hear her proposal prior to signing the resolution, Holt said. The Alienstock request will be heard at a future commission meeting.

Holt said Lincoln County is not looking to provide an annual response to the event, similar to what Clark County does on New Year’s Eve.

“So, any future events would have to be self-supporting with no burden placed on the county,” he said.