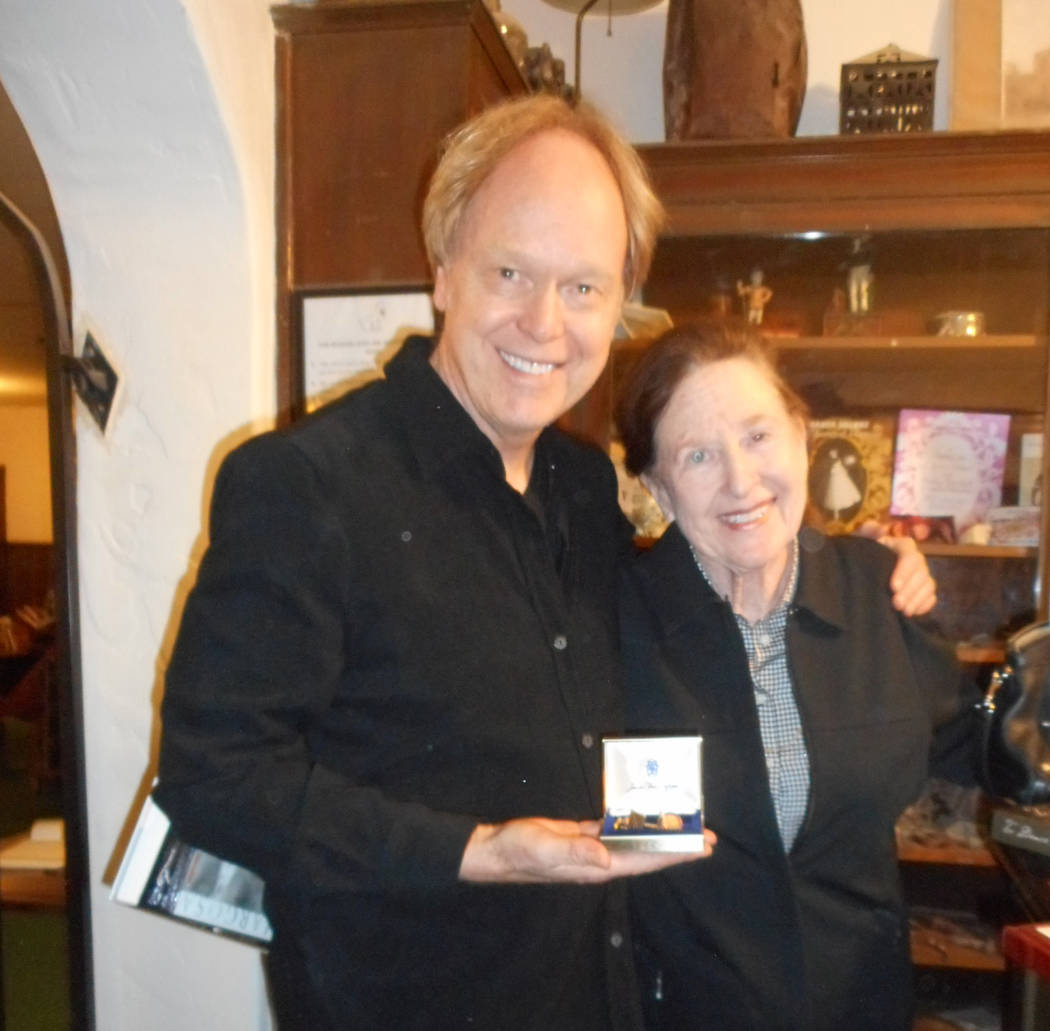 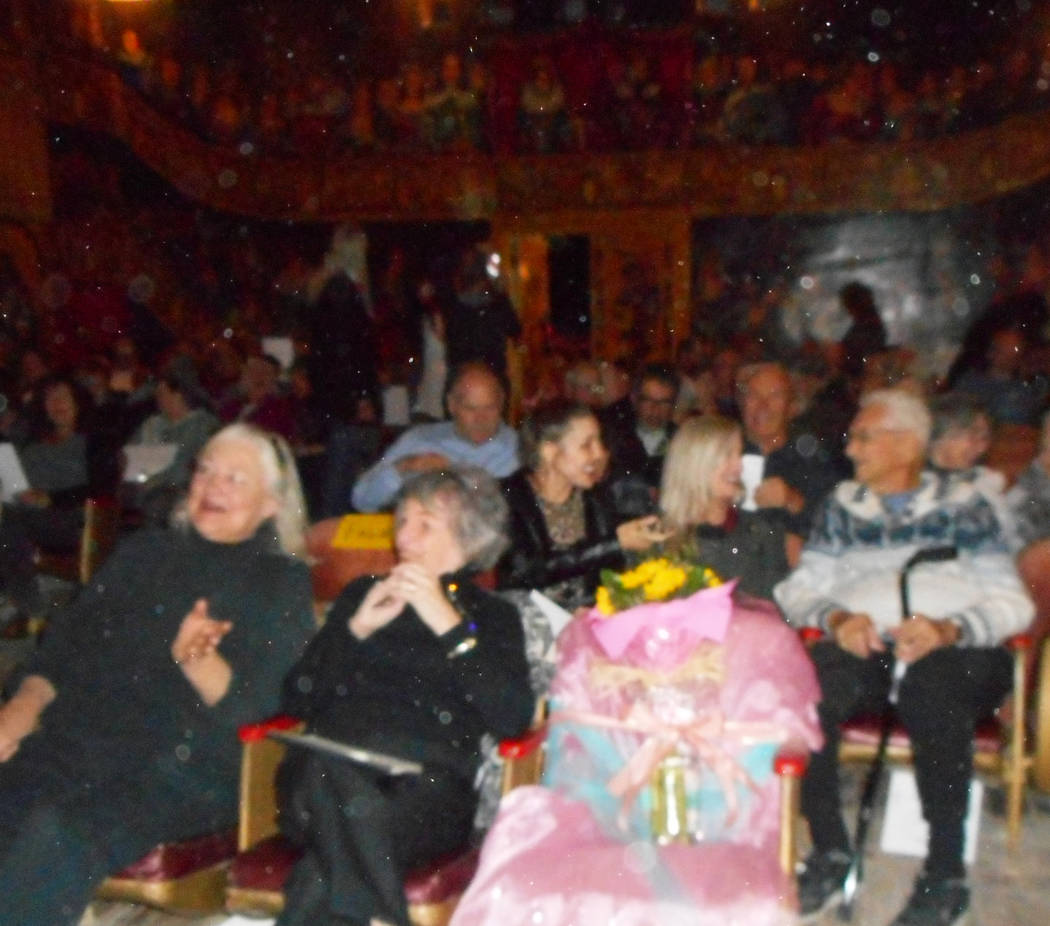 Robin Flinchum/Special to the Pahrump Aina Balgavis and Myrna Galle Van Buren sit next the chair reserved for the memory of their long time friend, Marta Becket, waiting for the show to start. In the background at right is Douglass Pushard. 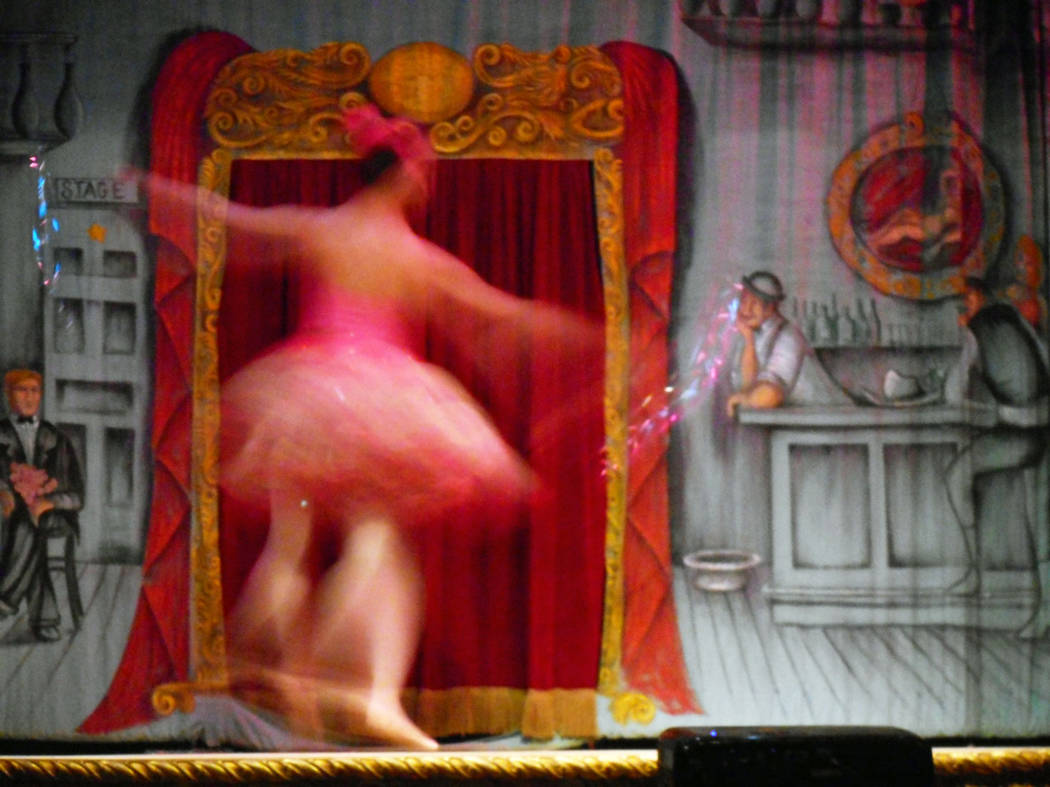 Robin Flinchum/Special to the Pahrump Hilda Vazquez spins in the Kewpie Dance at a performance marking the 50th anniversary of the Amargosa Opera House. The event was a sold-out celebration. 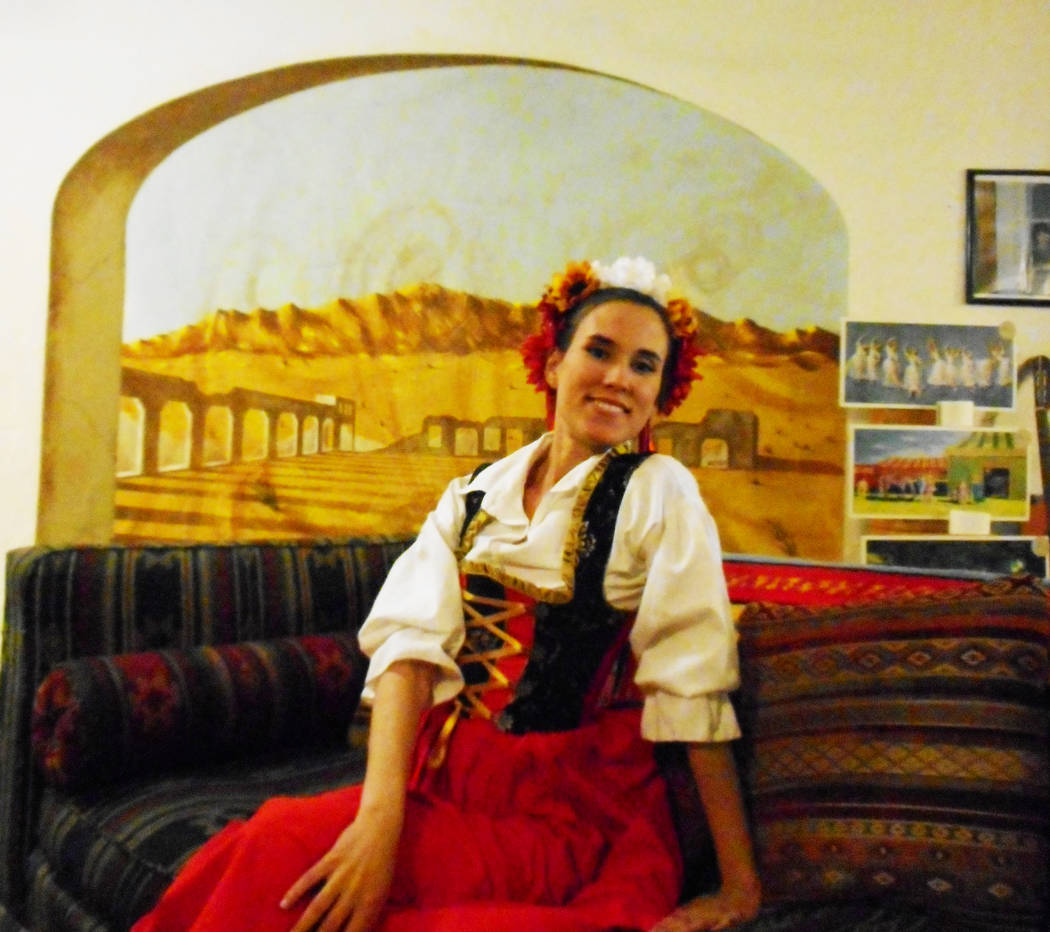 Robin Flinchum/Special to the Pahrump Hilda Vazquez in the Slavonic Dance costume waiting for a champagne toast at the Amargosa Hotel earlier this month when the Amargosa Opera House celebrated its 50th anniversary. 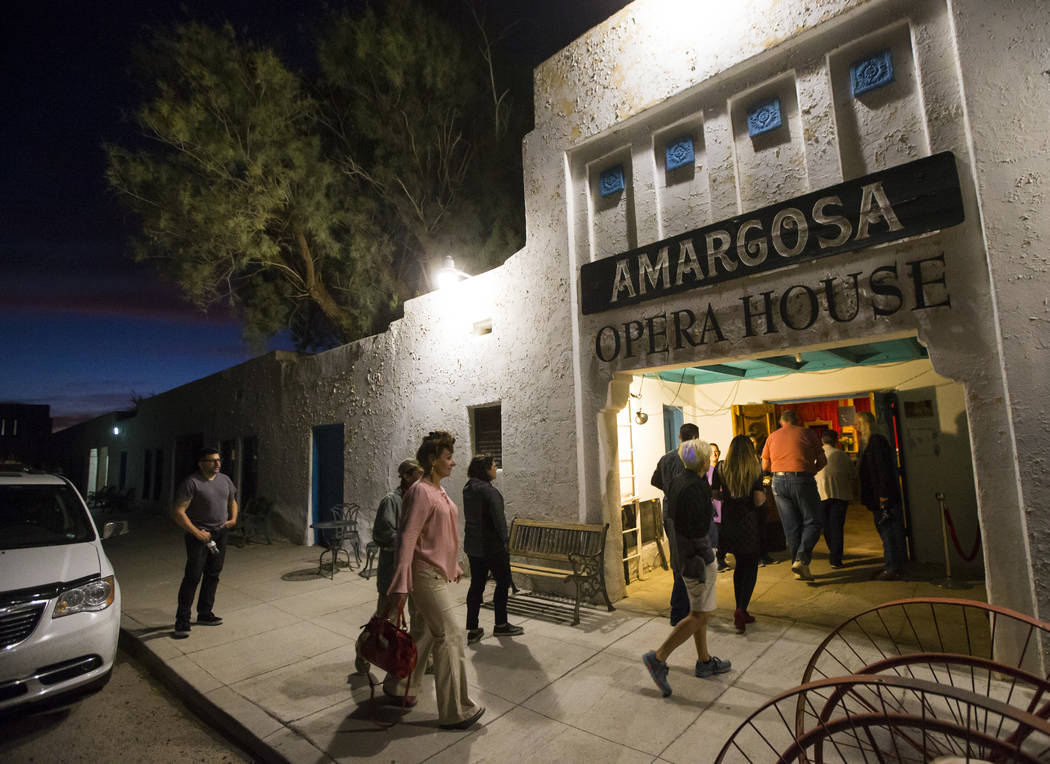 Chase Stevens/Las Vegas Review-Journal The Amargosa Opera House in Death Valley Junction, California recently celebrated its 50th anniversary with a sold-out special event. This photo from this past fall shows guests arriving for the season-opening performance.

It was Feb. 10, 1968, and transplanted New York dancer Marta Becket was lacing up her toe shoes backstage at the newly-christened Amargosa Opera House in Death Valley Junction.

Outside the double entry doors of the renovated old company town auditorium, her husband stood flagging down passersby on the lonely desert road in an effort to fill the house. It was to be her first official performance here, the beginning of an endeavor most people, back then, said she must be mad to undertake.

That night she danced to an audience of 12. They sat in round wire chairs in an auditorium that seemed huge because the walls were bare and white. A potbellied stove, already an antique, radiated warmth up near the stage as the audience settled in. The attendees were curious, skeptical, and ultimately surprised.

Fifty years later an audience of longtime friends and fans knew what to expect but the old Opera House still had a few surprises in store for the recent sold-out celebration of its 50th anniversary. That same potbellied stove stood sentinel, now surrounded by the famous murals that cover every inch of wall and ceiling.

A seat in the front row of the velvet-upholstered traditional theater seating is permanently reserved. Swathed in tulle, these days it is occupied only by the memory of Marta Becket, who passed away in January 2017 at the age of 92. On special occasions such as this, it’s filled with bouquets of flowers.

The evening’s program on Feb. 10 paid tribute to Becket’s dauntless pursuit of her creative dream, including the painting of the murals that, over the course of seven years in the 1970s, transformed those white walls into an incredible audience of the past.

Near the stove is painted a little cluster of ballerinas waiting to take the stage. The audience learned from dancer Myrna Galle Van Buren that those figures represented Les Sylphides, which Van Buren and Becket danced together at Radio City Music Hall in the 1940s.

Amargosa Opera House President Fred Conboy said the painting would eventually be displayed in a museum the AOH has planned.

Aina Balgavis, who photographed Becket and the Opera House over a period of 27 years, contributed a montage of some of her candid shots of Becket and Becket’s longtime partner, Tom ‘Wilget’ Willet. Film editor Ramon Caballero, once dubbed by Becket the Amargosa Opera House film curator, and now a member of the AOH’s board of directors, revealed in a short video a painting Becket had given him many years ago.

Conboy introduced video tributes by two artists who were relative newcomers to Death Valley Junction. “New artists catching fire to what Marta was all about, that’s the future of the Amargosa Opera House,” said Conboy.

Aerial dancer Lizette Bumbesti discovered Marta Becket and the Amargosa Opera House by accident shortly after Becket’s passing last January. “I don’t remember exactly how I found it, but once I did I could think of nothing else.”

The program included a video of Bumbesti performing the “Marionette Dance,” an ethereal aerial ballet, as well as an original song called “To Dance on Sands,” by singer Tom Munoz.

Dancers Sandy Scheller, a longtime friend of Becket’s, and Hilda Vazquez, who has been performing Becket’s dances on stage since late 2016, learning them under the tutelage of Becket herself, both danced on stage.

Seated among the honored guests in front was Douglass Pushard, who first came to the Amargosa Opera House in 1968 and was so impressed by it that he brought his wife and children out from Las Vegas to see it the very next week. He continued to visit regularly for the next fifty years.

“She was the first and most famous artist I ever met. You just couldn’t believe one person could be an artist, a dancer, a seamstress, and all of that,” Pushard said.

Becket’s many talents and her dedication to her art were the theme of the evening.

“Everything that could possibly be made was made by your hands,” dancer Vazquez says in a recorded tribute to Becket that plays before she dances. “Here moments are not lost, we share them forever.”

The AOH is working hard to protect and preserve Becket’s legacy said Conboy, and to bring in more programs that reflect her classical style. “Marta worked hard,” he said, “and now today we are the beneficiaries.”

The evening ended with a champagne toast in the lobby of the Amargosa Hotel, surrounded by Becket’s paintings and bits of theatrical memorabilia.

“Marta Becket will never die,” proposed Lothian Skelton, raising a glass high above the assembled crowd. Then a sea of glasses met and clinked before well-wishers drank to another 50 years of success.

The Opera House will be offering a live performance of a Mystery Opera matinee on Saturdays in late March and April, as well as ukulele concert matinees by NanUke and the Apologies in early March.