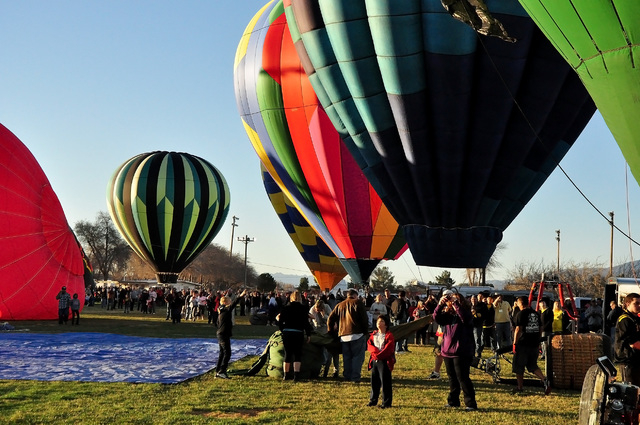 As many as 12,000 people attended the Pahrump Hot Air Balloon Festival during the weekend, leading to a long line of cars back to Las Vegas on Saturday.

“I got some rough attendance estimates from the Nye County Sheriff’s Office and it looked like we were somewhere between 10,000 and 12,000 for the weekend, which is an accumulated count,” Erwin said. “We had 65 vendors in all. We had about 60 last year.”

Balloonists from all over the Southwest made the trip to Pahrump, as well as some from Colorado and Oregon.

“We had balloons from California, Arizona, Utah and New Mexico,” he said. “We had 30 balloonists in total who came out.”

Vendors are the chief source of revenue for the event. Erwin said he’s contemplating making a few adjustments for next year’s festival. Erwin said the chamber will hold a debriefing meeting next week to discuss the chamber-sponsored third annual event.

He added there were few complaints from those who set up shop at the park.

“We are hearing a lot of good things and we had a couple of suggestions but no real complaints,” Erwin said. “I got the impression that the majority, if not most, of the vendors did quite well on their retail sales and typically there are not a whole lot of complaints from vendors when they do well on the sales side.”

“My business did very well and we are looking forward to watching the successful growth of the balloon festival,” he said. “It was well organized and the people from the chamber of commerce were great. It’s an event that I can see that’s only going to get bigger and better for the town of Pahrump. This year I decided that I would give the balloon festival a shot and I was very happy that I did.”

Those sentiments were also shared by face painter Pamela Sundlie from Henderson.

“They did a great job in promoting it this year,” she said. “I went to the first one so this is my third year working there. I was doing face paintings, so I had a line all three days.”

One change Sundlie would like to see is the variety of food vendors at the park.

“I’d like to see a barbecue vendor there next year,” she said. “Overall, I thought it was so cool. I will be going again next year. I live in Henderson. I’ve been in business for about two to three years and I work when I want.”

One major aspect of the event’s success was the weather, which Erwin said, cooperated, for the most part during the early morning hours.

“We were very blessed this year because we had three days of great weather, so the balloons were able to fly all three days,” he said.

Erwin, however, lamented the conditions in the afternoon hours created some disappointment for visitors who drove in from Las Vegas, expecting to get airborne, noting that hot air balloons and windy conditions are not a good match.

As with many family-oriented events in town, comes the Valley Cruisers of Pahrump car show, which Erwin described as ‘phenomenal.’

“I’m going to say we had 50 to 60 cars, which was a huge draw for us,” he said. “About half as many people who were in the park were over by the classic cars checking them out. Spring Mountain Motorsports also brought over a couple of their race cars and that was pretty cool to see those up close.”

Most importantly, Erwin could not give enough praise for all of the nearly 150 volunteers from 14 organizations and 47 companies that participated in this year’s event.

“It was a totally community-involved event and it would not have been possible without the sponsors, the volunteers,” Erwin said. “Obviously with the community event, keeping it free and affordable was very important. It was easily one of the larger free events in town.”

Additionally, Erwin said he and his staff are pondering a few alterations for next year’s balloon festival.

“We have been kicking around the idea of having a booth where people who stop by could ask the pilots questions,” he said. “We are also kicking around some additional carnival rides and possibly create a different layout for the vendor booths as well as adding more live music. There is definitely some stuff that we can add and we are excited to sit down and get a good overview of the overall success of the event.”

“I think the hotels were sold out two weeks prior to the event,” he said. “I want to look at ways to partner with some of the RV parks here in town, as well as the RV clubs. I think we need to explore ways of getting more RVers to visit the community for these types of events.”

Erwin also applauded the efforts of the Nye County Sheriff’s Office for their assistance in providing a safe environment for the festival goers, giving special mention to Sgt. David Boruchowitz and Sheriff Sharon Wehrly.

“They really helped us out and I think we were all surprised at the turnout that we had, but we pulled together as a community and made adjustments as needed,” Erwin said. “It ended up on a very positive note because there were no major issues or safety problems. That experience is what caused it to run so smoothly and really look seamless probably from outside. ”