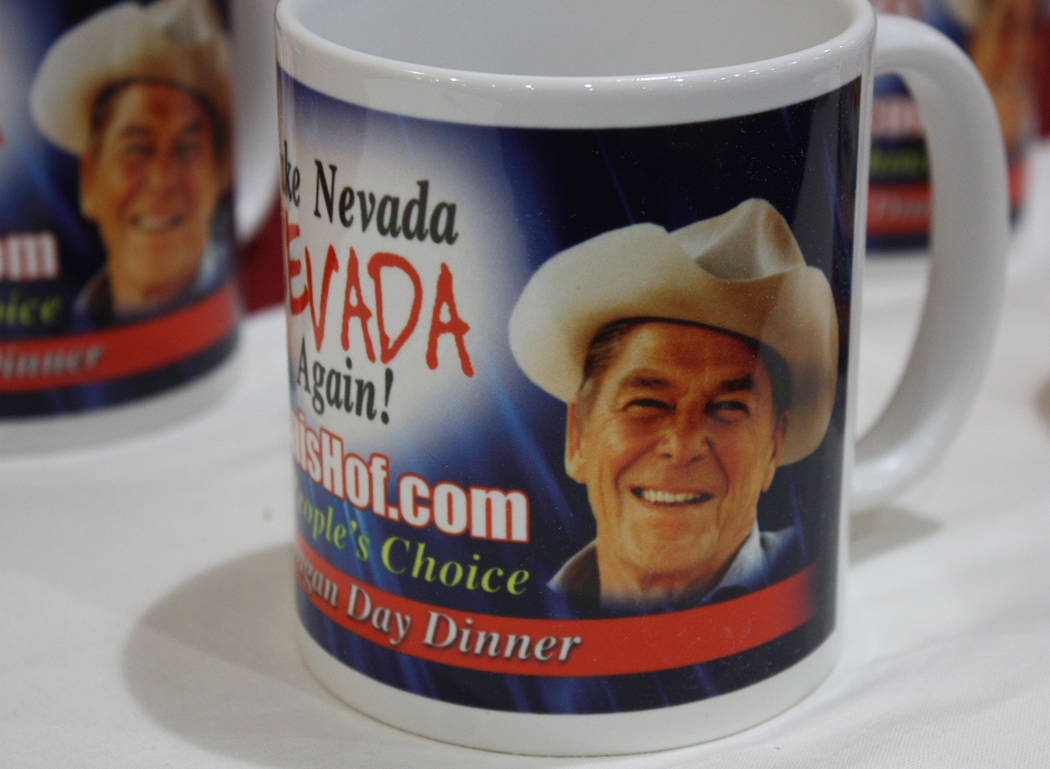 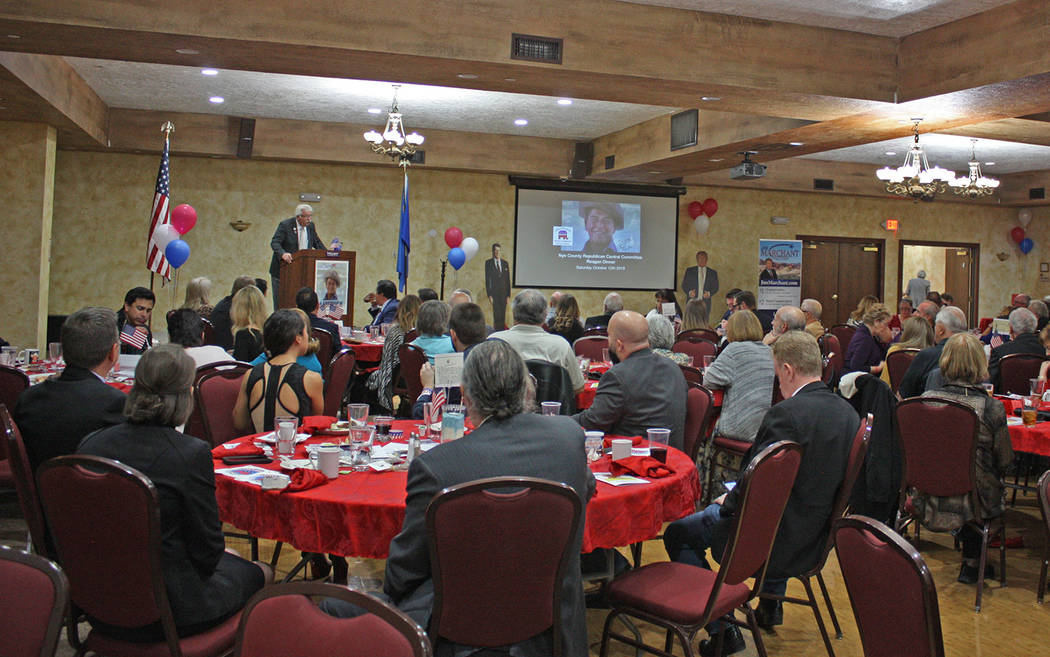 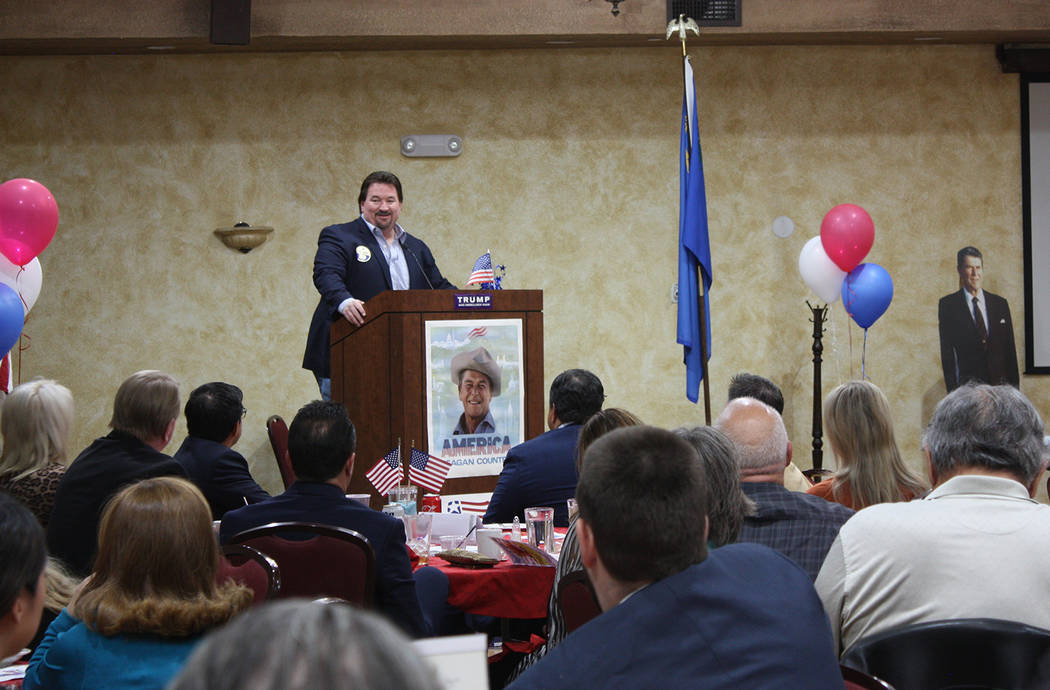 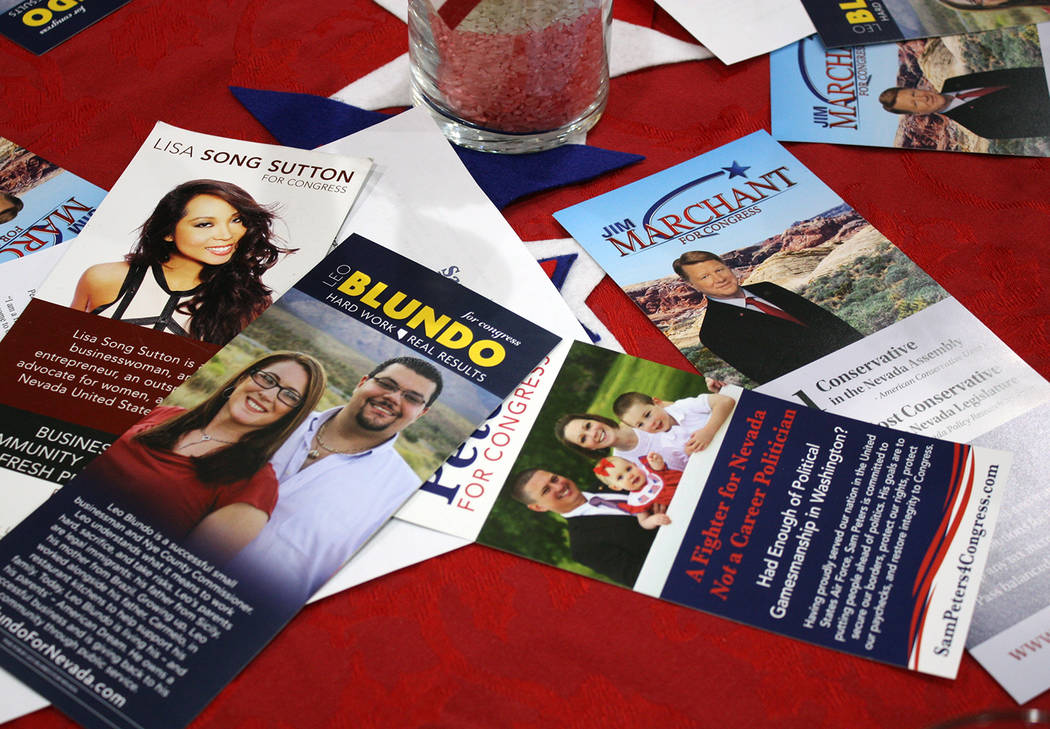 Robin Hebrock/Pahrump Valley Times A political event at its heart, the tables at the Reagan Dinner included plenty of campaign literature. 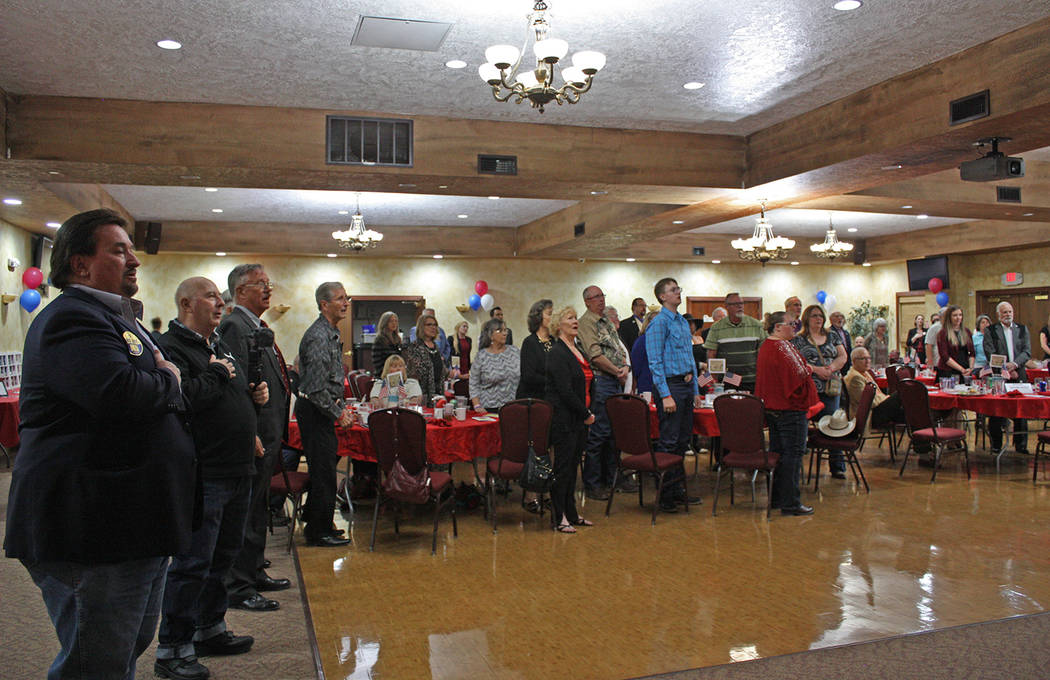 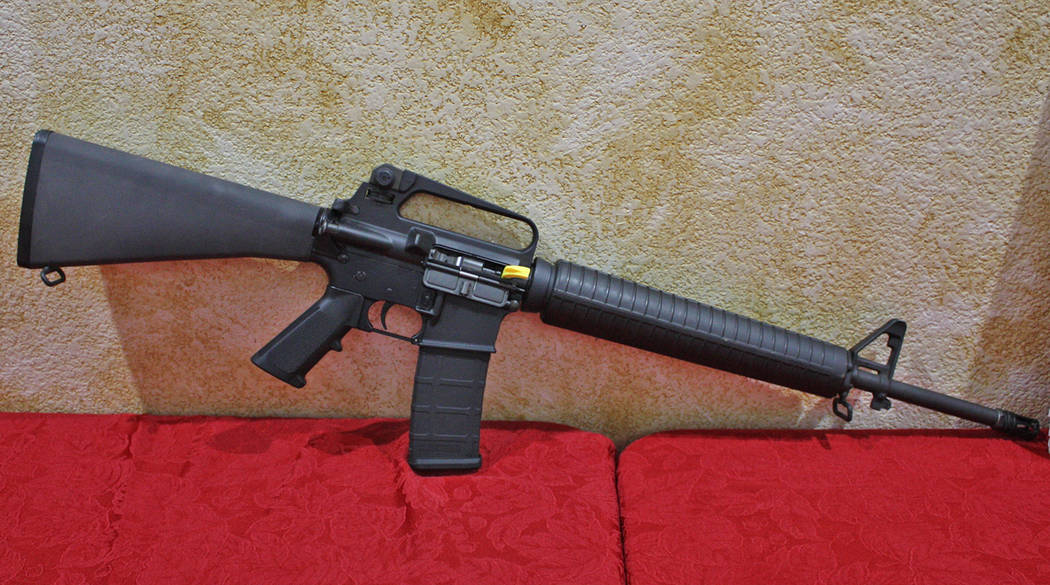 President Ronald Reagan was the 40th president of the United States and throughout his political career, which spanned more than two decades, he built a legacy of conservative ideology, carving out for himself a place in the hearts of Republicans.

Though Reagan’s time in office ended 30 years ago, and he passed away in 2004, that legacy still lives on today.

For the Nye County Republican Central Committee, Reagan is a man to be honored and remembered for all he accomplished and that is why he is a central figure at one of the organization’s most popular events, its annual Reagan Dinner.

“What a great night! Great conversation, wonderful people, fabulous dinner, great raffle and auction items made this night a huge success,” Nye County Republican Central Committee Event Chair Stacie Hiebert told the Pahrump Valley Times. “I am so grateful to all those who stepped in and helped me make this such a successful event with only two and a half weeks prep time.”

The Reagan Dinner attracted approximately 105 attendees, Hiebert said, and included not only a delicious meal but speakers, raffles, a silent auction and a special video featuring some of President Reagan’s most memorable moments.

As the event fell right around the anniversary of the death of Dennis Hof, who was posthumously elected to the Nevada Assembly District 36 seat in 2018, there was a remembrance tribute to Hof as well, headed by Tina Trenner.

Taking on the task of master of ceremonies was Joe Burdzinski, who used to hold the chairmanship of the Republican central committee.

He announced that night that after a series of turnovers in the leadership within the committee, he had decided to run for chairman once again.

The election for the Nye County Republican Central Committee chair is to take place this Saturday, Oct. 26 at the organization’s regularly scheduled meeting.

Nevada Republican Party Chairman Michael McDonald was invited to speak at the event, giving the audience an overview of the state of the Republican Party. Providing an update on the state of the Nevada Legislature was appointed Assemblyman Greg Hafen II and Nye County Sheriff Sharon Wehrly spoke, as well. Keynote speaker for the evening was Trevor Loudon, a political activist and author well known for his conservative principles.

Of course, with an election year looming and many contenders already hitting the ground running with their campaigns, there were several candidates for office at the event.

The two Republicans who will be seeking the Nevada Assembly District 36 seat, Hafen and his challenger, Dr. Joseph Bradley, were both in attendance and were given the opportunity to address the crowd.

Contenders for Nevada’s Congressional District 4 Republican nomination were out in force, with Nye County Commissioner Leo Blundo, former Nevada Assemblyman Jim Marchant, Charles Navarro, Sam Peters, Randi Redd and Lisa Song Sutton all taking the chance to speak to the audience about their goals and ideas as well.

Individuals who contributed to the raffles and silent auction included Kaye La Pointe, Hiebert and her husband David, Marge-Anne Venable, Suzanne Fairchild, Sarah Cleveland, Norma De Lao of Harvey’s Barber Shop, Hafen, Trenner, Burdzinski and his wife Faye, Richard Bushart, Bill and Vicki Gladsjo, McDonald, Dan Simmons, Katreen Romanoff, Karen Williams and Patty Vinikow. Hiebert extended her thanks to all of the donors, as well as to Michael Hickey, who provided music for the event.

“Because of the generosity of our local businesses and donations made by individuals, the amount of raffle tickets sold was amazing,” Hiebert enthused, noting that with all things accounted for, the Nye County Republican Central Committee was able to raise around $3,000 to support its efforts.

For more information on the Nye County Republican Central Committee visit www.nyegop.org or call 775-727-2500. The committee’s headquarters are at 3370 South Highway 160.