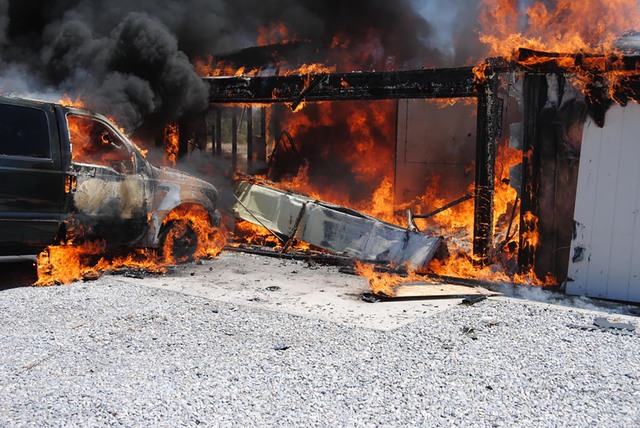 Pahrump Valley Fire and Rescue responded to this structure fire on Carberry Street in August. It was one of 185 fire calls in 2016, up from 143 in 2015. Special to the Pahrump Valley Tim

Pahrump Valley Fire and Rescue Services had a substantial year-to-year increase in the number of service calls in 2016, according to the department’s annual report.

Fire Chief Scott Lewis said his department responded to 9,338 calls, an increase from 8,702 service calls in 2015.

Lewis called the increase “significant,” especially when it came to structure fires.

“In comparison to last year, our structure fires and fires in general, went from 143 last year to 185 this year,” Lewis said. “Our rescues and accidents are pretty static. Last year there were 672 and this year it was 665 so it’s roughly in that same area.”

Lewis said there were two deaths due to fire in 2016 after there were none in 2015. However, civilian injuries due to fire dropped from 27 to 15 during the past two years.

“We attribute one to inappropriate actions by one of the persons who was killed,” Lewis said. “One person ran back into a burning house when dispatch and everyone worked diligently to avoid that.”

Lewis also said recent trends over the past several years show an irrefutable increase in service call volume to locales outside the town of Pahrump.

Those service calls, commonly known as mutual aid assignments, have increased from 56 to 63.

“We are expanding our responses where we are going further and further to support our neighboring communities and that is something we are always willing to do,” he said. “We are also cautiously aware of the different things that we have to do to maintain our service levels within the community. That is something we are working both with the administration and the union on how we can do it smart and yet look at the possibility of increasing things we need to do here in our own community. We’re evaluating everything from our capital improvement plan and the way we operate on a regular basis.”

He gave high praise to both full-time crew members who routinely work 24-hour shifts and volunteers.

“Most people may not know that there’s quite a lot of time involved in certain calls,” he said. “If we have to go out to Amargosa Valley, you’re looking at several hours and we’ve been picking up more and more of those calls lately. I just want to stress how proud I am of our crew for working as hard as they do without complaining. It’s heartening to see them take on this level of call volume.”

Lewis, meanwhile, noted additional challenges for crews as they respond to service calls in the valley.

“We are experiencing response delays from road construction projects,” he said. “We have had to work around a lot of challenges to provide the high level of service that we never had to do previously. With the roundabout project and the South Highway 160 project, I think we’ve done a really good job, even though the challenges do remain.”

Aside from responding to accidents, fires and medical transports, Pahrump fire crews routinely participate in various community events throughout the year, including the Baker to Vegas run and the upcoming Pahrump Balloon Festival next weekend.

“That also includes the Freedom Festival and the annual Fall Festival,” Lewis said. “The town is now getting back into the Pahrump off-road races and these are all the things we have to take into consideration in addition to the other standbys that we are responsible for in our community. In addition to all the calls and all of these different activities, we still have to maintain our continued education units and our ongoing training. We have to make sure that we are on top of our game for just about any kind of incident that could occur here.”

Regularly maintaining the fleet of emergency apparatus is yet another important aspect of the fire department’s commitment to public safety.

The department recently received a Utility Task Vehicle and an upgrade in radio communication systems purchased with funds from the Public Safety Sales Tax plan.

“We are doing everything that we can to be cost efficient yet effective in providing services to the community and to our neighboring communities,” Lewis said. “We have expanded our service levels as far as obtaining an all-terrain vehicle this past year using PSST monies that would allow us to go into more remote areas to provide fire and also EMS services.”

Additionally, Lewis acknowledged the supportive efforts of Nye County administration, as it pertains to the fire department.

“County Manager Pam Webster has been great in her willingness to sit down and talk with us about how we can improve things,” he said. “Of course our elected leaders are the ones helping us pull those triggers. They have been there and we really appreciate that.”