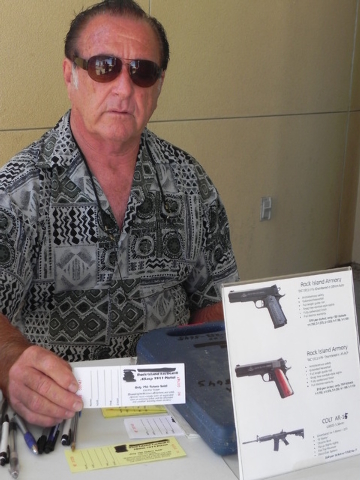 Don Cox was selling tickets to a gun raffle at the front door of the Ian Deutch Justice Facility, where people were voting, but had to block out the reference on the ticket that it was being held for the Republican Party.

“The Communists back there were complaining. So we just scratched off the Republican thing on the logo,” said Cox, the husband of County Commissioner Donna Cox. “I’m not talking to people coming out that door, I’m not talking to them coming in. They got other things on their mind, voting.”

The Nye County clerk’s office is attempting to deal with some people who are promoting politics within 100 feet of the voting place, in violation of state law.

During the 2012 election members of the Concerned Citizens for a Safe Community sat at the same spot at the front door and asked people if they wanted to fill out an informal poll, an attempt to monitor the accuracy of the vote count.

“Nobody wanted to do it this year,” said Cox, whose wife is also president of the safe community group.

Nye County Clerk Sam Merlino said there have not been a lot of problems she’s aware of, but one voter was told to remove his “Sharon Wehrly for Sheriff” button while voting.

Candidates and their supporters have pushed up against 100-foot line outside the door. One booth promoted Wehrly, another one had signs for her opponent, Assistant Sheriff Rick Marshall just past the 100-foot sign.

“Unless someone makes a formal complaint it’s difficult for me to tell somebody out there to move,” Merlino said. “Within the 100, you can’t electioneer for a party, a candidate or a ballot question. We also have an individual collecting ballot signatures for the 2016 election.”

Merlino said her hope is Nye County commissioners approve a policy that prohibits campaigning and circulating petitions in the courthouse parking lot. She said it’s hard to control the campaign workers sometimes and the parking lot is already full enough on court days.

Sheriff Tony DeMeo offered to provide her a deputy in the parking lot, Merlino said.

“It’s kind of a last resort,” Merlino said. “It makes everybody uncomfortable.” She added it could help solve the “he said, she said” arguments.

While attention was on the Nov. 4 election, people circulating statewide initiative petitions for signatures in the parking lot were looking ahead to November 2016. One initiative petition would close a loophole and require an unlicensed person who wishes to sell or transfer a firearm to another person to conduct the transfer through a licensed gun dealer who runs a background check on the potential buyer. There would be an exception for transfers between family members, temporary transfers while hunting and for immediate self-defense.

Another initiative proposes legalizing the sale of recreational marijuana to people 21 years old or older, similar to regulations on alcohol, using the proceeds from the 15 percent excise tax for education.

Burke, an independent contractor for Nevada Petition Management who goes by one name — his California driver’s license from Newbury Park, Calif., even lists just his one name — said between the two initiative petitions he collected about 850 signatures by Monday afternoon.

“To be honest with you, there’s a little more support for the background checks than legal marijuana,” Burke said. “I know this is the wild west and everybody here open carries or conceal carries or whatever but people are concerned about background checks. Some people are upset or worried that we’re trying to infringe on their Second Amendment. Personally I’m all for the Second Amendment.”

Catherine Lu, a spokesman for the Nevada Secretary of State’s office, said people circulating statewide initiative petitions need to gather 25,417 signatures in each of Nevada’s four congressional districts by Nov. 11, or 101,667 signatures statewide. The Nevada Legislature, which meets beginning in February, can accept the petitions making them law or if they reject the petitions and propose a different measure, both measures will be on the ballot in the next election. If the Legislature doesn’t act on the petitions within 40 days the secretary of state shall put the petition up to a vote in the next election.

Burke said people are also circulating the petitions in front of supermarkets like Albertson’s and Smith’s Food and Drug, the Pahrump Community Library and the Nevada Division of Motor Vehicles. The reaction on the initiative to legalize recreational marijuana varies from people who think it’s great to people who think it’s terrible and a gateway drug that leads to more harmful drugs, he said.

Dwight Lilly set up his own tent in the parking lot advertising candidates like Marshall and Pahrump Justice of the Peace Kent Jasperson.

“I just felt like it was something I could donate my time and help dispel some falsehoods out there,” Lilly said.

Joanna Laina said nobody bothered her going to the ballot box as she walked out of the courthouse Monday.

“So far it was real easy,” Laina said. She said the only real campaigning was people circulating the initiative petitions.