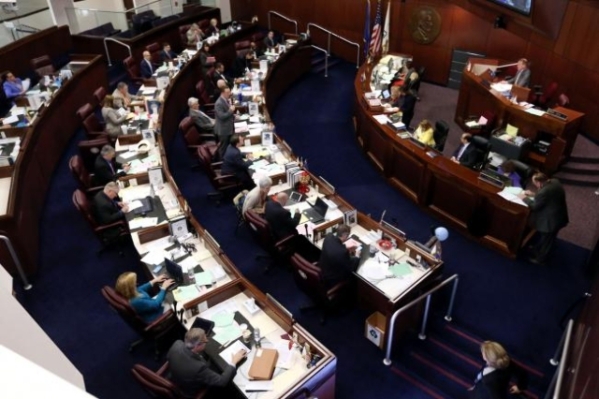 CARSON CITY — Very low marks for the state’s purchasing process, internal auditing and lobbying disclosure dragged Nevada far down in the national rankings for public integrity, coming in at 46th out of 50 in a recent survey for its overall governance and anti-corruption efforts.

But if it’s any consolation, most states scored poorly in the 2015 State Integrity Investigation, a data-driven assessment of state government last performed by the Center for Public Integrity and Global Integrity in 2012.

Nevada’s overall score of 57 edged out only South Dakota, Delaware, Wyoming and Michigan. Nevada received a D- in 2012.

The report notes that there has been little progress on transparency issues in Nevada or nationally since the first investigation in 2012.

“Overall what you see in Nevada are just poor scores pretty broadly in most of the categories,” said Nicholas Kusnetz, project manager and reporter on the effort. “In eight of 13 categories the state scored 50 or below. Across the board, for the most part, there is a lack of transparency.”

But some effort is being made to change that.`

‘The battle is never over’

Bob Fulkerson, state director of the Progressive Leadership Alliance of Nevada, said increasing accountability by state officials has been an ongoing mission of his group.

“We’ve testified nearly every session since 1995 on better reporting and transparency because Nevada’s shameful ethics and lobbying rules undermine public confidence in our democracy,” he said. “Lobbyists and the corporations whose profits they seek to maximize at the public trough are the only ones who benefit from the current system. We must expose them, and the legislators who do their bidding, in order for the system to change.”

While the analysis was mostly negative, Joecks said, Nevada does have strong open meeting and public records laws, with a few notable exceptions. One is that the Nevada Legislature has not subjected itself to the Open Meeting Law, he said.

“These reports remind lawmakers and citizens that you have to keep fighting for transparency,” Joecks said. “The battle is never over.”

Nevada scored the lowest among all states in the category of lobbying disclosure with a score of 38.8.

Kusnetz said several factors went into the ranking, including the fact that lobbyists in Nevada only have to report spending when the Legislature is in session for 120 days every other year.

Also, he said: “Nevada law does not recognize lobbyists that just lobby the executive branch. The reports that are filed are not audited. Lobbyist employers do not have to say what they pay their lobbyists.”

The 2015 Legislature approved some reforms to the lobbying process. One measure, sponsored by Senate Majority Leader Michael Roberson, R-Henderson, will clarify and prohibit most lobbyist spending starting Jan. 1. The law prohibits lobbyists from giving — and lawmakers from accepting — anything of value, whether or not the Legislature is in session. The prohibition extends to members of a lawmaker’s household or staff.

There are exemptions, though, for items such as travel, lodging and meals provided as part of an educational or informational meeting, event or trip. Also still permissible is the cost of a party, meal, function or social event to which every legislator is invited.

Nevada also received low marks for its internal auditing system, which the report criticized for being vulnerable to political interference. Nevada’s Division of Internal Audits is under the governor’s office, and while there is no suggestion such interference is occurring, Kusnetz said, the stage is set for it to happen.

Nevada’s Public Employee Retirement System was similarly flagged for a lack of controls to prevent the board members who oversee the pension fund from making investment decisions that financially benefit them personally, Kusnetz said.

Nevada law only requires public officers who earn more than $6,000 a year from their nonelected posts to file financial disclosure statements with the state secretary of state’s office. PERS board members, like those on most other state boards and commissions, receive just $80 per meeting.

But Tina Leiss, executive officer of PERS, said board members are required to disclose conflicts under the state’s Ethics in Government law and its laws governing open meetings, public records laws and fiduciary duties.

Of course, public records are only as good as the public’s ability to see them, and Kusnetz said Nevada — like all but six other states — received a failing grade for access to government information.

Nevada’s low score was the result of several factors, including the difficulties a member of the public faces if a record request is denied, he said.

“There is not really a good process for appeals that is effective, and there are no consequences if an agency fails to turn over documents,” Kusnetz said.

*Scores were calculated to the nearest tenth for rankings by state but rounded here for clarity.