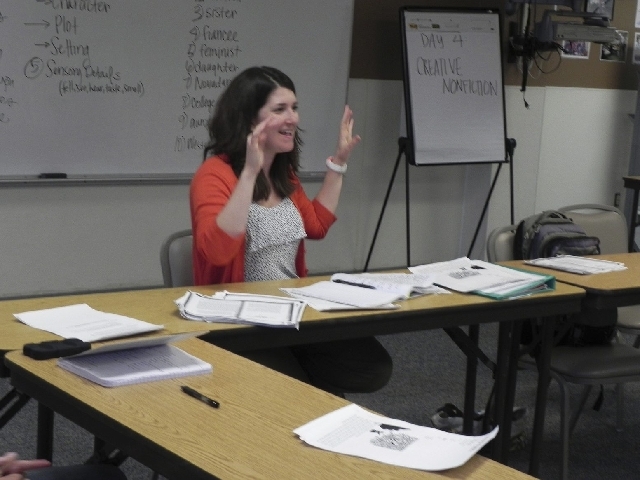 Last May, when national award-winning author Claire Vaye Watkins visited Pahrump Valley High School and attended some 45 different classes to recruit students for a summer writing workshop, she was struck by one consistent theme — “Almost every single time I said that I grew up in Pahrump, someone would respond with ‘I’m sorry’,” Watkins says.

For a writer, says Watkins, “this place is rich in imagery. There are so many stories here, I can’t write all the stories this place has. That’s why I need these students.”

So she and her fiancé Derek Palacio, also an award-winning writer, founded the Mojave School.

The workshop opened its doors on Monday to 17 students for a week-long intensive training session, focusing on fiction, poetry, screen writing and creative nonfiction.

Watkins, who graduated from PVHS in 2002, says that desert imagery, the vastness of the landscape, the character of its people, and most especially her homesickness for it all, acted as muse while she wrote her 2012 collection of short stories called “Battleborn.”

At 29, Watkins has become a person of note on the literary scene. She is currently an assistant professor of English at Bucknell University in Pennsylvania, and will be teaching at Princeton University this fall.

In the wake of her success, she could have chosen nearly any spot in the country to start up a writing workshop. But she decided to pass on all the urban centers where writing communities are already in full bloom, and elected instead to return to Pahrump and see if she could plant some seeds.

“This is my home and I know there’s a need here,” Watkins says. She remembers the challenges she faced as a student in a poor, rural community.

It was at a Shakespeare festival she attended, with the help and encouragement of PVHS instructor Paul DeLella, that she first encountered the kind of creative environment in which she thrives.

“The more versions of life students can be exposed to, the better,” Watkins says, “so I tell them this is what mine has been up to this point. What will yours be?”

So often young people growing up in Pahrump are only exposed to a very limited version of the world, Watkins says, while the remoteness and solitude of the place do make it a fine harvesting ground for stories.

“If you want to do certain things, you have to go away from it,” she says. “And then things happen and you don’t come back.”

And the young people who remain never hear the stories of those who’ve moved away.

Watkins remembers her frustration with the process of navigating college admissions, a subject of a recent Op Ed piece she wrote for the New York Times. While military recruiters were walking families through the process of enlistment, overworked high school counselors and families unfamiliar with college requirements were unequal to the task of helping all of their students find a way to academia. With some help from her friends, Watkins did apply to and was accepted to the University of California at Santa Cruz. But when the bill came, “The number was so huge it was indescribable. It was like the distance from the Earth to the moon.”

So she threw the bill away and didn’t start college until a year later, when she enrolled at the University of Reno on a Millenium Scholarship. But the way in which poor, rural students are overlooked or even ignored by college recruiters has remained something of a thorn in her side.

“I have to believe that there’s something we as a community can do about that,” she says.

The Mojave School is being offered with assistance from the NyE Communities Coalition Campus, where the classes are being held, as well as support from PVHS. Watkins and Palacio’s five-day, completely free of charge workshop focuses on teenagers between the ages of 14 and 18 and ends this evening with an open mic reading at Off 160 Coffee House.

For this, the first time run, Watkins and Palacio set the agenda using their combined experience teaching writing. But, she says, “we’ll be listening to the students to see what they want and what they don’t want. We want this to belong to them,” she added. “We come in for a week and teach this class, but they’re here all year round. It’s up to them to form relationships and keep this alive.”

Watkins says they intend to keep the Mojave School going every summer in Pahrump as long as they can find students, and she has hopes that it will grow. She says there is a lot of groundwork yet to be laid, including applying for nonprofit status and seeking funding for things like bringing in other well-known authors to teach.

When this week is up, Watkins heads back to the East Coast. She’s writing a new novel about what happens when the water leaves, and waiting for word on other prestigious prizes for which Battleborn is a finalist. But next summer, she’ll return. And with the Mojave School in place, she’ll have a reason to come home.

“I think it’s hard to live here,” Watkins says, “but I want Pahrump to be itself, and to celebrate all that it is.”