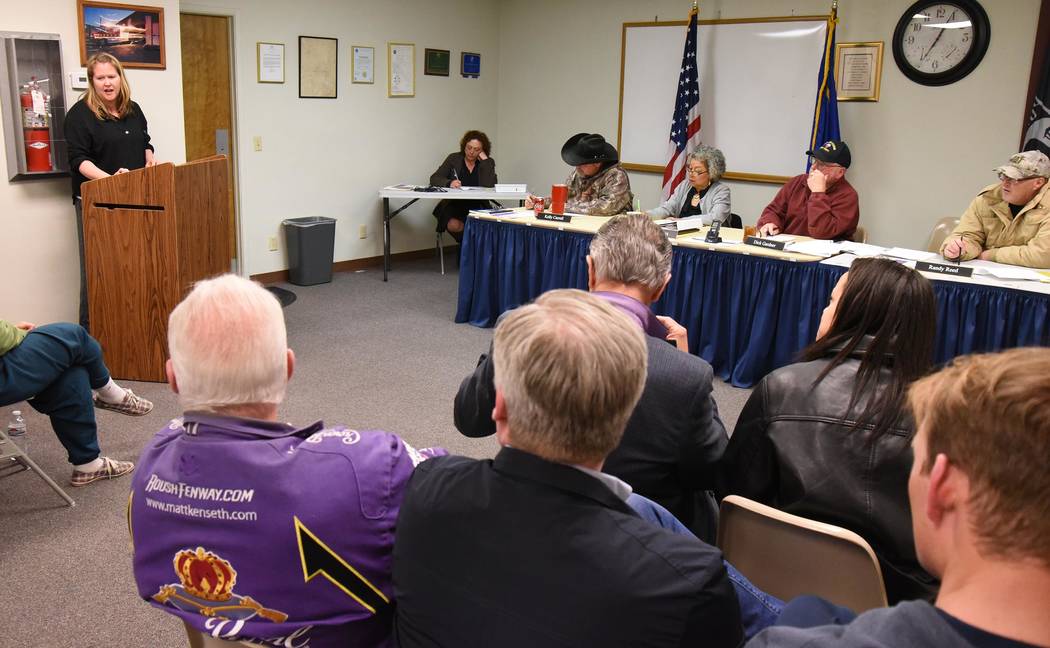 Richard Stephens / Special to the Pahrump Valley Times Joni Stumpf from Rainbow Helping Hands addresses the Beatty Town Advisory Board March 11. She stated that they will be bringing drug, alcohol, and mental health counseling and therapy to Beatty twice a month. 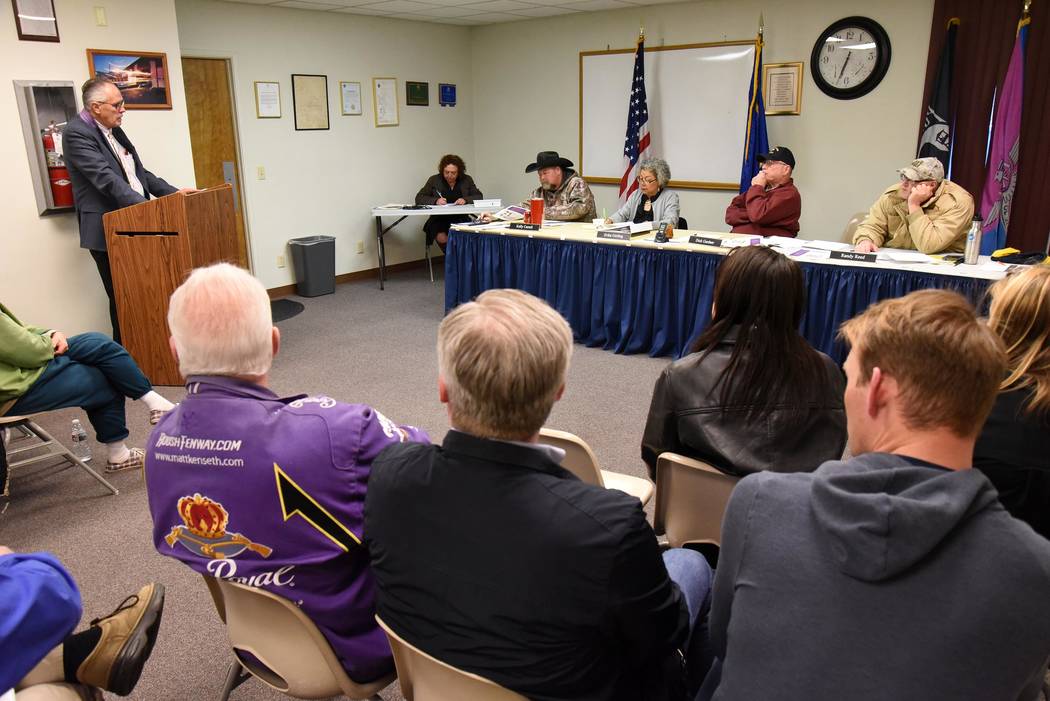 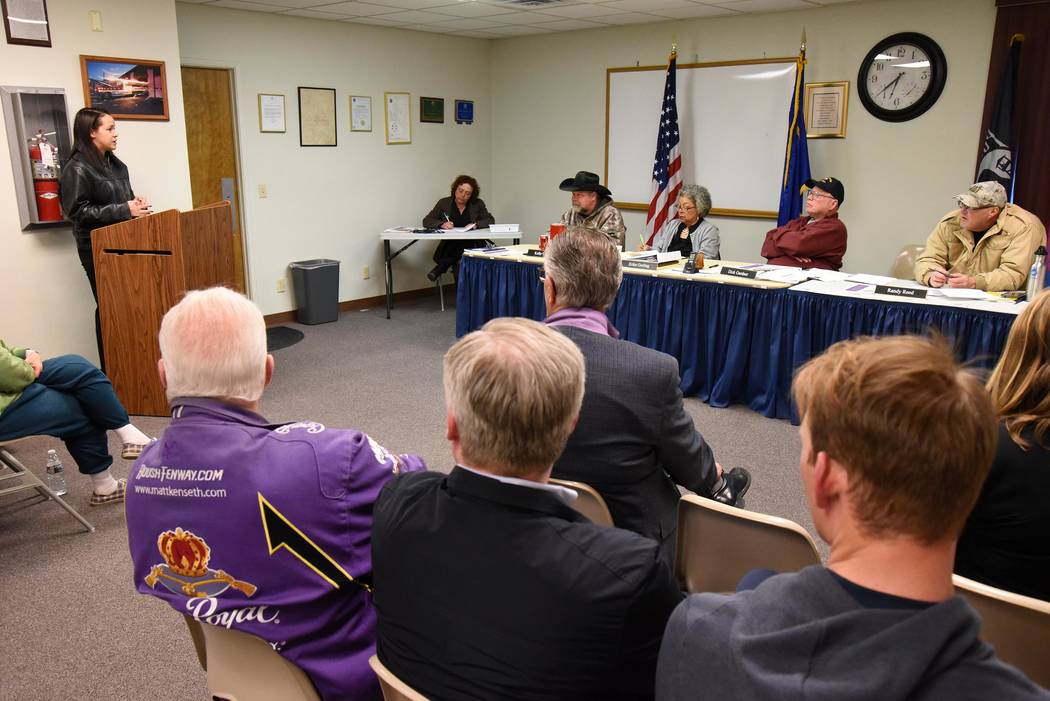 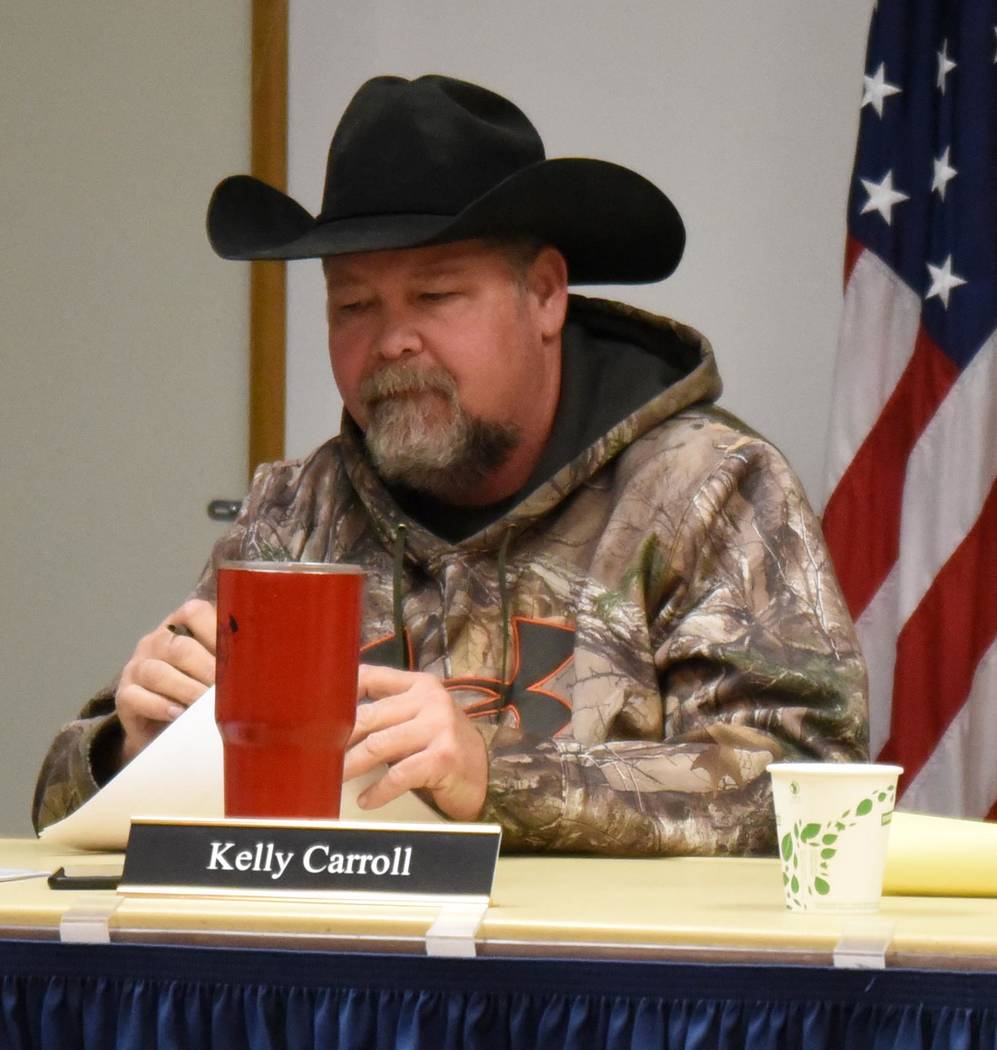 Richard Stephens / Special to the Pahrump Valley Times Kelly Carroll just after he announced his resignation from the Beatty Town Advisory Board at the end of the meeting held March 11.

At the same March 11 meeting in which the Beatty Town Advisory Board voted to advertise to fill the opening created by the resignation of Crystal Taylor, board member Kelly Carroll ended the meeting by announcing his own resignation, saying this was his last meeting.

This leaves the five-person board with a bare quorum if all remaining members are present. Anyone interested in filling the rest of Taylor’s term on the board should submit a letter of interest to the town office no later than March 20 before 5:00 p.m. The board will have to approve advertising the other open seat at a future meeting.

The board considered a request from Jim Henderson, who manages Ed Ringle’s Beatty properties, to have signs erected at the entrances into Beatty prohibiting engine breaks and idling. Henderson said that trucks often park behind the Exchange Club Motel and sit idling their engines or reefers. He said air conditioning units suck the diesel exhaust into motel rooms.

Asked about the idea of putting “No Parking” or “No Idling” signs on the back of the motel, Henderson said, because of trees, there was nowhere to put them where they would be seen.

Board Chairman Dick Gardner pointed out that a sign would not be needed on the Highway 374 entrance coming from Death Valley, as that route was not used by large trucks.

Nye County Public Works Director Tim Dahl said he would consult with the Nevada Department of Transportation to explore the possibility of putting up the signs, suggesting it might be possible to put them on the same poles with the “Your Speed” radar signs the town is getting.

Dahl noted that there was no ordinance “teeth” to enforce the restriction, but they still should have an effect.

Part of the meeting was taken up by presentations from non-profit organizations seeking to bring health care services to Beatty.

The first presentation was from First Person Care Clinic. John Williams, the clinic’s director of business affairs said, “We’re here to see if the need is here, and we believe the need is here.”

He also said, “Our goal is to come up here and be primary care for you guys.” This would appear to conflict with Dr. Michael Reiner, who is currently the primary health provider at the Beatty Clinic.

Williams said they had toured the clinic, and that they had had discussions with Dr. Reiner in which he seemed welcoming, but that he had stopped talking with them.

“We’re not making promises,” said Williams, saying that they were going to be “taking baby steps.”

First Person CEO Roxana Valeton said that they were looking at the possibility of bringing in a mobile unit, which would also allow them to bring specialists to Beatty, including dental care.

She said that the number of people they would serve was important in applying for grants and that they were looking at extending service on up into Goldfield and Tonopah.

They said they had also met with the Beatty Health and Welfare board, making them aware of their plans. Jim Weeks, a member of that board, commented, “Anything to improve the quality of health care in town we’re in favor of.”

The other presentation was from Rainbow Helping Hands, Inc. Representative Joni Stumpf said that they will be bringing drug, alcohol, and mental health counseling and therapy to Beatty twice a month.

The plan is to be at the Beatty Clinic on the first and fourth Tuesday of every month.