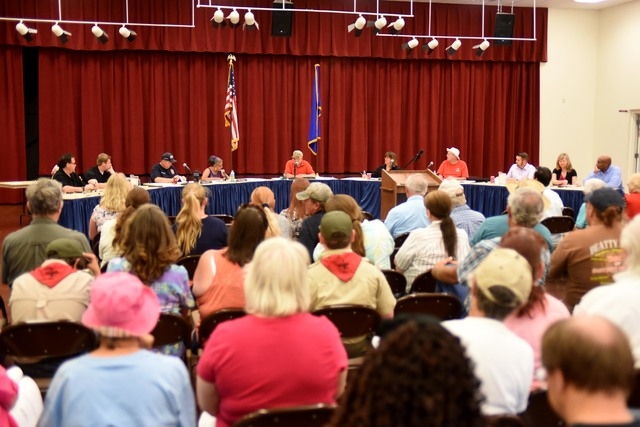 The Beatty Town Advisory Board has chosen Drs. Michael Reiner and Michael Jonak and associates as the new health care providers at the Beatty Medical Clinic.

The board held a special meeting May 26 to discuss the proposals from the doctors and from Nevada Health Centers, and to decide whom to recommend to enter into a contract with the county to operate the clinic.

Either candidate would be allowed to use the clinic facility rent-and utilities-free as in the past, but their proposals on the table varied greatly in days and hours of operation and somewhat in services provided.

The proposal from Reiner and Jonak called for operating the clinic five days a week. It said that if they received the $35,000 subsidy they might use it to pay some of the existing staff. However, they said they could operate without the subsidy.

The board made it clear that a subsidy was not negotiable. “It’s a subsidy that’s not going to happen,” said Gardner in response to a question from resident John Wurth.

Board treasurer Erika Gerling explained, “A subsidy was always in NHC proposals, but we never agreed to it or said that we were so inclined.”

She went on to say that the town simply did not have the money for a subsidy. She said she was concerned that, as the county makes even deeper cuts in its budget, including emergency services, the town might be called upon to shoulder the cost of having the ambulance service and its facilities.

Board Chairman Dick Gardner said he was puzzled by NHC’s figures. “I can’t believe you’d want to keep something open when you are losing $117,000 a year.”

NHC CEO Walter Davis said, “Our goal has always been to be here,” and that, “We are here to support the community.”

Davis said there had been no actual negotiation and that over the next year they would work very hard to make changes, that some projects other projects might have to be put on hold to accomplish it.

Gerling and Gardner, besides saying that the money wasn’t there to pay a subsidy, were not in favor of subsidies anyway.

Gerling said that subsidies were not supposed to be permanent. She said a subsidy should be a short-term thing to prop up a business while it is getting started. “I’m not in favor of giving subsidies, whoever we choose,” she added.

Gardner was more blunt: “A subsidy is like feeding an alligator. You hope you’ll be eaten last.”

The remaining board members agreed that the money wasn’t there and that there would be no subsidy.

There were plenty of questions from the audience about services, and quite a bit of discussion about differences in what each candidate provides or can provide.

Dr. Reiner said it might be six months before they would be able to have pharmacy service at the clinic.

“In-house pharmacy is something we have not done because we’ve been working in a town with four pharmacies,” he said. He said that they would probably work with Pahrump Medical Supply to set something up, and that, in the meantime, since doctors would be traveling from Pahrump, they could carry prescriptions.

Another thing that would take some time for the doctors to set up is immunization service. Reiner said this involves a lot of paperwork to get permitted by the state. In the meantime, these services are available in at least a couple of places in Pahrump.

Reiner said that they will be able bring equipment and offer ultrasound testing at the clinic. He also said that they plan to bring in specialists from time to time, specifically mentioning an orthopedic surgeon and a cardiologist.

One concern in making the decision was the fate of the clinic’s current employees. Ashley Cathcart pointed out how involved current nurse practitioner Diane McGinnis has been in the community, and that she would go to the clinic even if called for an emergency in the middle of the night.

The doctors said they would try to keep as many as possible.

When the board voted unanimously to go with the doctors from Pahrump, many audience members applauded, whether in support of the choice, or simply out of relief that a decision had been made is not clear.

Also not clear is the eventual fate of the clinic’s current employees.

That will have to be worked out by its new operators.

back when the Barrick Bullfrog mine was open, but that things had gone downhill after that.

“Nevada Health Centers stuck it to the town of Beatty, and they’ve done it ever since,” he claimed. “Your numbers haven’t ever jived, in my opinion. I am not putting another nickel into that clinic.”

At first Carroll thought the board would not be able to make a decision, since both proposals involved at least a $35,000 subsidy, and the board began considering putting the decision off until their June 8 meeting.

Gerling, however, said, “The thing I don’t want to see happen is that we take too long to make the decision,” leaving little time for a smooth transition, if any.

Finally it was pointed out that Drs. Reiner and Jonak had said they did not have to have the subsidy. Resident Ann Marchand said that, to her, the decision was “a no-brainer.”