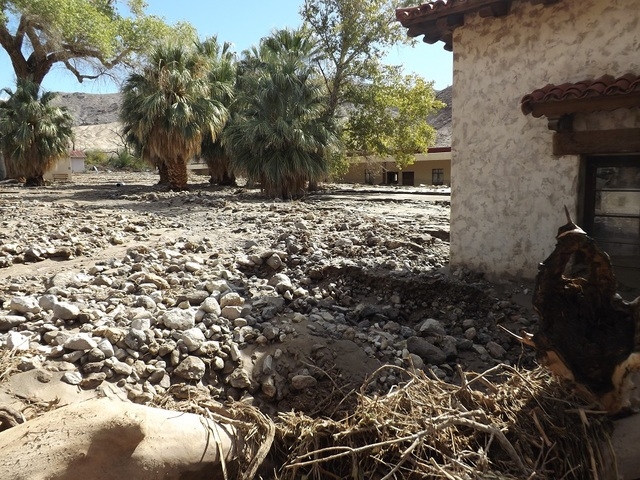 BEATTY — It appears that Scotty’s Castle will be closed at least until 2019, according to a report given to the Beatty Town Advisory Board meeting June 13.

The report by Death Valley National Park Superintendent Mike Reynolds and Management Assistant Abby Wines outlined the damage done to the popular attraction, the cost and scope of cleanup, and repair efforts so far and yet to come.

Scotty’s Castle, which normally averages four inches of rain per year, got that much in two days last October, with three inches falling in just five hours on Oct. 18. This produced a catastrophic flash flood of 3,200 cubic feet of water per second, destroying the road, depositing as much as 4 feet of mud, and damaging several stuctures.

The flood broke doors, windows, and interior walls in the Visitor Center (historic garage/long shed), deposited up to 4 feet of mud inside the Hacienda Building, destoyed the spring house, a reservoir, and a pipeline, and washed away over a mile of historic fence posts, 24 power poles and more.

The Castle itself was not flooded, but the roof leaked in several places, and the underground tunnel was flooded and the swimming pool filled with mud.

Damage to the road was severe. Repair will actually involve moving some of the road to higher elevations. The flood carved new channels in the canyon, so that water will flow differently there in the future.

Wines said that nationwide consultation had shown that “there’s widespread agreement that Scotty’s Castle is important and will be repaired. Estimates of the total cost of repair is between $26 million and $30 million.

Reynolds and Wines also revealed that the park is considering an increase in camping and entrance fees. This will not affect the annual, senior, volunteer, and military passes. The proposal is for the entrance fee per vehicle to go from $20 to $25, and per person from $10 to $12. The entrance fee per motorcycle would be $20, whether there is one rider or two, instead of the current $10 if there is only one rider. Campground fees would also go up a few dollars, but the free campsites would remain free.

Park officials are also considering a $32 “flood tour” of Scotty’s Castle to show the damage the flood wrought and raise funding.

On another matter, Marty Campbell gave a report to the board on progress made by the Beatty Senior Center Project Council on items that had been suggested to them by the board. He said that fundraising letters had been sent out to five businesses, that they had gotten the forms for applying for 501c3 nonprofit status. The center is working on changing their bylaws to comply with requirements for that status.

The board approved giving the Senior Center up to $125 for an Every Door Direct Mailer for all the P.O. boxes in Beatty.

Board member Erick Gerling said that a new nurse practitioner had been hired for the clinic. She also noted that there would be a Celebration of Life service for former Beatty resident Brian Thayer at the community center, Saturday, June 25, at 2:00 p.m.

Ann Marchand reported on progress in the organization of this year’s Beatty Days and on the Volunteer Day cleanup of the river bed.

Beatty Water and Sanitation District Manager Rob Shirley said that there has lately been an unusual spike in illegal sewer hookups and the stealing of water, with people cutting or attempting to cut padlocks off meters that were shut off. He said, “It has just been crazy in the last four months.”

Shirley also said that there has been vandalism at the town swimming pool to the point that security cameras are being installed.