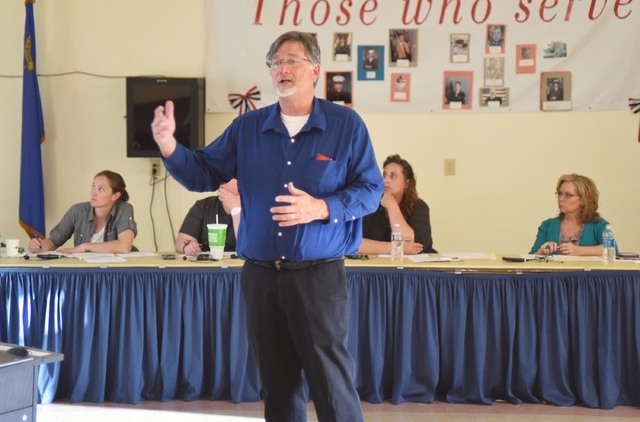 BEATTY — There was not one word of protest from the audience May 26 as the Beatty Water and Sanitation District Board of Trustees voted to raise water rates a total of $4.40 over the next two years.

The vote followed a detailed presentation by district manager Rob Shirley explaining the scope of, and need for, the increase.

Shirley started out saying he first needed to squelch the rumors going around town about the proposed increase.

First of all, he said it did not involve doubling, tripling, or quadrupling the existing rates, nor did it have anything to do with the possible purchase of the Washington Federal building, and it was not to boost salaries.

The manager shared auditor’s reports that showed that the district has been operating at a substantial loss for years when depreciation is included in the calculations.

Pumping water out of the ground, treating it, storing it and distributing it is an expensive endeavor, and equipment doesn’t last forever.

The cost of some things, such as the electricity to pump the water, employee benefits such as retirement and health care, chemicals, and other materials and supplies has risen.

Shirley talked about the expenses the district has faced in such things as replacing the pump in the 1500-foot-deep well that supplies half the town’s water.

The biggest need is to provide capital funds to maintain expensive equipment and to repair and replace aging infrastructure.

Much of Beatty’s aging water distribution system is asbestos-concrete pipe that is at least 50 years old. It is prone to breakage, and when workers patch a break, it often breaks nearby. He cited one example when repair of a break turned into replacing forty feet of pipe.

One of the town’s water tanks is rusting and leaking. It will cost an estimated $300,000 to replace, and there are other pieces of equipment that are aging and subject to failure at any time.

Shirley listed several things the district had done to cut costs, such as using electricity more efficiently at the sewage treatment plant, reducing the number of employees from five to four, reducing overtime and stand-by pay, doing studies in-house rather than paying to have them done, and correcting water rate calculations.

The manager also said that, if they are successful in purchasing the Washington Federal building they will save $200 a month by no longer having to rent portable toilets for the office. Ironically, the Beatty Water and Sanitation District office was not hooked up to the sewer system.

What Shirley proposed was a gradual increase in water rates over the course of years to bring the budget up to what was projected to be needed to cover depreciation, but several present saw the need as more urgent.

Resident Barry Jacoby said, “What Rob is saying is 100 percent absolutely true. Beatty Water and Sanitation is in trouble. Things are going to break. I am proud of what he is doing. I am in favor of doing the whole amount now. I doubt any property owner cannot afford four dollars a month.”

Board member Jeannie Ybarra said she’d also like to see it done all at once. “Some people will be against it, but they’ll be even more against it if we had a big break and everything went down.”

Member Teresa Sullivan agreed. “We all know we’re in trouble. The sooner we can fix it the better.”

Chairman Amina Anderson added, “I’d hate to see a major outage in the middle of summer.”

The board then approved a compromise of sorts between Shirley’s proposed gradual increase and doing it all at once, voting to raise rates by $3.40 in the coming fiscal year, and by the other $1.00 the year after. They will then reassess the situation.