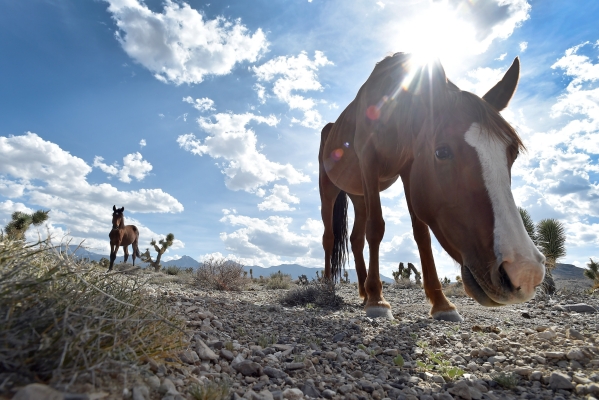 Less than a week after 28 emaciated wild horses were rounded up and put down, Bureau of Land Management officials announced plans to collect more animals they say are at risk of starvation in the mountains outside Las Vegas.

She said the horses were “so lethargic” they didn’t even move when the helicopter flew overhead.

The BLM will attempt to capture the animals and nurse them back to health starting Wednesday morning by setting up a corral and baiting it with hay and water.

The agency just concluded an emergency roundup on Sept. 2 that netted 201 horses from the area around the tiny community of Cold Creek. Twenty-eight of those horses — 22 mares and six studs — were later euthanized due to “poor prognosis for recovery or improvement,” according to a BLM report.

The decision was made by a veterinarian from the U.S. Department of Agriculture’s Animal and Plant Health Inspection Service, who examined the once-wild horses at the BLM-owned Oliver Ranch, along state Route 159 in Red Rock Canyon.

“We really did try to save them,” Norris said.

Now she fears there could be as many as 150 more horses still out on the range “that are just as bad as the ones we gathered.”

“We had no idea we had that many,” Norris said.

The BLM launched the initial roundup Aug. 29 near Cold Creek after officials said drought and overpopulation had left some animals at risk of starvation.

In May, the bureau counted about 470 adult horses in 102,000 acres around Cold Creek, roughly 400 more than the agency’s own “appropriate management level” for the area.

According to the BLM, the 28 horses that were destroyed were in poor to very thin condition, with scores of 1.5 or less on a standardized, 9-point system widely used to determine equine health.

Most of the horses gathered during the roundup had a body condition score of 2, defined as emaciated, with only slight tissue coverage and vertebrae, ribs, shoulder, neck and other bones visible. None of the animals were scored above 3, which is considered thin. The ideal score for a healthy horse is between 4 and 6.

According to BLM reports, 170 of the surviving horses have been transported to a privately owned contract holding facility in Axtell, Utah, to be fattened up and cared for.

Three foals deemed too small for transport are being fostered in the Las Vegas area, Norris said.

The horses gathered from the Cold Creek area eventually will be transferred to a BLM facility where they will be offered for adoption or purchase.

Those that do not find homes will live out their lives at off-range holding pastures in the Midwest that are now home to tens of thousands of once-wild horses.

The government’s actions have drawn criticism from wild horse advocates.

California-based preservation group Protect Mustangs is calling for a full investigation by the Inspector General into the management, roundup, feeding and veterinary care of the 28 horses that were put down.

“The BLM roundup was supposed to save wild horses not kill them,” said Anne Novak, the group’s executive director.

“Had the government implemented a birth control program when we proposed it, these horses would likely not be suffering today,” said Gawne in a written statement.

The BLM’s last roundup from the Wheeler Pass herd management area surrounding Cold Creek came in 2007, when 250 animals were removed.

At the time, some mares were given birth control treatments and released back onto the range, but Norris said the medication is only effective if the animals are captured and treated again every one to four years.

A mare that received birth control in 2007 was among the horses rounded up since last week. When she was captured, she had a foal with her, Norris said.