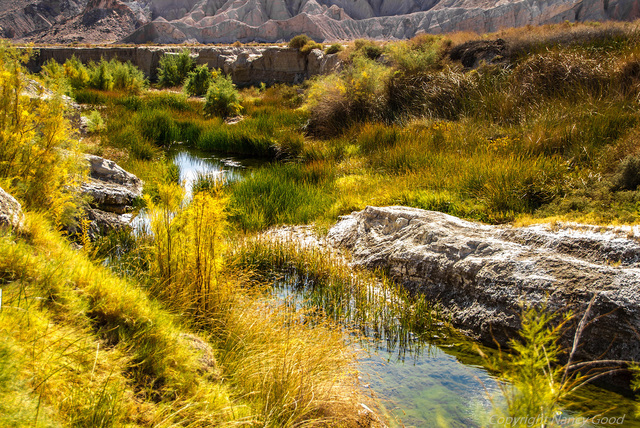 Desert Renewable Energy and Conservation Plan designates 2.8 million of acres of desert as conservation lands across the southeastern portion of California. Among them is 600,000 acres of land in the Amargosa River Basin. Nancy Good/Special to the Pahrump Valley Times

The Amargosa River Basin will be saved from renewable energy development under the Bureau of Land Management’s Desert Renewable Energy and Conservation Plan released Wednesday.

A significant component of California’s renewable energy efforts, the plan designates 2.8 million acres of the desert as conservation lands across the southeastern portion of the state and permanently protects over 600,000 acres of land in the Amargosa River Basin.

Patrick Donnelly, policy director for the Amargosa Conservancy, a non-profit organization dedicated to the protection of the Amargosa River, called the plan “the biggest conservation achievement in generations.”

“We feel like this is really going to start a new chapter in land management for the Amargosa,” Donnelly said about the eight-year effort.

The Amargosa River Basin is a region comprised of numerous valleys which feed into the Amargosa River, the only free-flowing river in the Mojave Desert, according to the Amargosa Conservancy press release. It also includes iconic locales such as Silurian Valley and Willow Creek, officials said.

On Wednesday, U.S. Secretary of the Interior Sally Jewell announced approval of Phase I of the BLM’s conservation plan in Palm Desert, California.

Phase I is part of a larger, comprehensive effort with the state of California designed to provide a blueprint across 22 million acres of public and private land in California’s desert region. The plan is for streamlining renewable energy development while conserving unique and valuable ecosystems and providing outdoor recreation opportunities, according to the U.S. Department of Interior’s press release.

Donnelly said he was “pleased” with the BLM’s decision to designate the Amargosa River Basin as a new conservation area.

“The plan is to decide which parts of the desert have solar and which parts don’t. And we’ve been arguing that the Amargosa, our area is too special for solar. And so, we’ve been pushing the BLM to designate the Amargosa as national conservation lands and put the solar somewhere else,” Donnelly said.

One of the most important legacies of the DRECP is the permanent protection of the habitat for the Amargosa Vole, an endangered rodent which lives exclusively in the spring-fed wetlands surrounding the town of Tecopa Hot Springs, according to the Amargosa Conservancy’s press release.

“Permanently protecting the vole’s habitat as California Desert Conservation Lands will assure that our marshes remain healthy and that visitors will continue to come and experience our amazing area, allowing our businesses to thrive and grow,” said Amargosa Conservancy board member and business owner Nancy Good.

“Theoretically, DRECP should help California to fulfill that goal because it designates 400,000 acres for solar,” Donnelly said.

The development areas include San Bernardino and Riverside counties, where renewable energy development projects will be located.