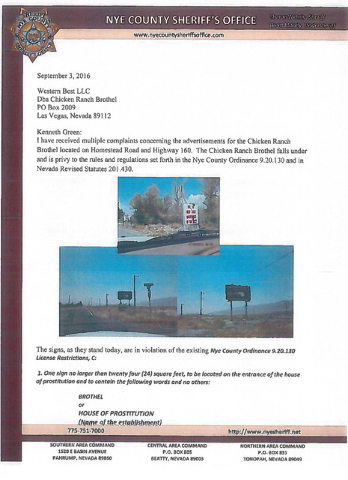 The front of a two-page letter sent by Nye County Sheriff Sharon Wehrly on Sept. 12 to the owner of the Chicken Ranch Brothel alerting him to possible county code violations for using roadside signs to promote prostitution. A similar letter was sent to brothel owner Dennis Hof. Courtesy of Nye County

Two Nye County brothels, Area 51 Death Valley Cathouse in Amargosa Valley and the Chicken Ranch outside Pahrump, have been illegally promoting their houses of prostitution through roadside signs, according to letters sent to both owners by the Nye County Sheriff’s Office.

The agenda item relating to the signs was to set a show cause hearing scheduled for Oct. 18.

Nye County Sheriff Sharon Wehrly said since the 15 days the department gave Area 51 owner Dennis Hof and Chicken Ranch owner Kenneth Green to remove the verbiage in question from the signs had not passed, that they should table the issue until the time had passed.

“That letter was sent out on the 12th (of September), so from the 12th they had 15 days to comply,” Wehrly said. “So their compliance time is still open.”

If the signs are updated to comply with code, which Hof is in the process of doing, the item will be removed from the agenda.

“I did receive a phone call from Dennis Hof’s attorney and I did notice on Highway 160 his brothel signs have been covered over,” Wehrly said. “I understand that is the same thing that is going to be happening on Highway 95 at Lathrop Wells.

“I am proposing that we wait the 15 days to determine whether they’re going to comply or not. It appears to me that Mr. Hof is intending to comply, however I have not heard from the Chicken Ranch.”

Hof told the Pahrump Valley Times Monday that he is changing his signs and that the new ones, tied into his run for State Assembly District 36, would be up by the end of the week.

“They’re being picked up in Vegas on Wednesday and they’ll be installed on Thursday or Friday,” Hof said.

With him replacing the signs in question, Hof explained that he doesn’t anticipate legal action being taken against him.

“What they’re not getting is that sign is not for the brothel, that sign is for the Alien Travel Center, but it’s a moot point anyway, because they’re going to say, ‘Lying James, Vote Hof’.”

In letters sent out by Nye County Sheriff Sharon Wehrly to Hof and Green, the county explained both of their perceived violations.

The letter to the pair of brothel owners explained that multiple complaints have been received by the sheriff concerning advertisement signs described as “brothel signs”.

Hof’s signs in question were ones that displayed the brothel and Cathouse openly on Highway 95 in Lathrop Wells in Amargosa Valley. Green’s signs were located on Homestead Road and Highway 160.

The code also states that it is illegal to advertise any brothel on public streets or on any public highway.

The punishment listed for such violations is up to six months in the county jail and/or up to $1,000 fine for the first violation in a three-year period.

The item surrounding the possible updating to brothel codes in the county was also pushed until the Oct. 18 meeting, as the county has yet to receive business impact statements from all the brothel owners in the county.