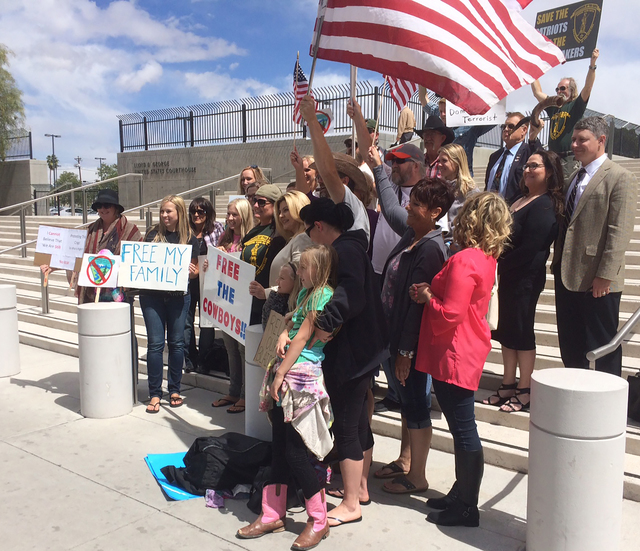 Protesters pose outside of the Lloyd George Federal Building in Las Vegas ahead of an arraignment hearing in April 2016. Seventeen defendants face charges stemming from the armed standoff in 2014 that took place in Bunkerville. Jeff German/Special to the Pahrump Valley Times

One of the 17 defendants in the Cliven Bundy case wants a federal jury to visit the spot where the armed standoff unfolded in 2014 between supporters of the Nevada rancher and federal agents who impounded his cattle.

Federal prosecutors have not yet responded to the motion, which argues that while pictures and video are available, they do not illustrate the “sheer enormity” of the site or show every part of the area.

“Personally seeing the actual road, wash, and general terrain would remedy the issue,” the motion says.

If granted, the visit would give the jurors a direct view of the location, including the nearby Toquop Wash, where federal agents, in the midst of the confrontation, made the decision to release Bundy’s cattle.

The standoff occurred in April 2014 off of Interstate 15 near Bunkerville, about 80 miles northeast of Las Vegas.

No shots were fired at the standoff, which has become a prominent chapter in the story of public-lands disputes in the West.

The defense motion acknowledges that viewing the scene, an estimated one-hour drive from the Las Vegas courthouse, would be an “inconvenience” that would require the Nevada Highway Patrol to shut down one northbound lane of the interstate so jurors could view and walk the area.

According to the motion, an investigator for the defense traveled to the area and determined it is “nearly impossible” to view the area from where the defendants were situated on the bridge. That is because cars whip by at a high speed and there is only about 5 feet of shoulder between the barrier and travel lane of the interstate, the motion says.

“The jury would not be prejudiced by a viewing,” according to the motion. “There would not be any outside influences at the location during the viewing and only court staff and the parties would be present.”

The area has not significantly changed since the incident, although the cattle corrals and gate used to hold the cattle have been removed, the motion says.

Cliven Bundy and Mel Bundy, one of his sons, have filed court papers supporting Parker’s motion and asking to join it.

The cattle were impounded after the Bureau of Land Management received court orders to seize them because no grazing fees had been paid to use federal public lands on which they roamed.

A visit to the site is just one potential logistical hurdle in a complex case.

The 17 defendants are slated to be tried in groups in three separate trials, with the first one starting on Feb. 6.