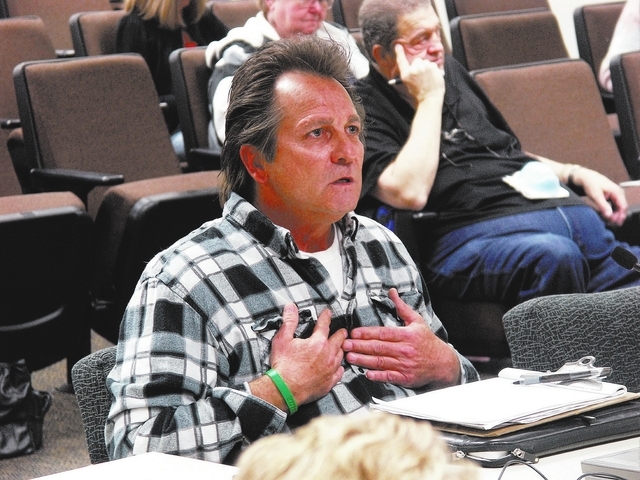 Organizers of the tentatively scheduled High Desert Cup Music Festival and Cannabis Expo cleared another hurdle this week to hold the event at Petrack Park this April.

Pahrump Town Board members on Tuesday voted to approve vendor parking at RV spaces for the inaugural event.

“If it is something that we have been doing in the past for others, I don’t see any reason why we wouldn’t do it now,” he said.

Town Manager Susan Holecheck told the board that there is precedence for the action by virtue of the various events sanctioned at the site over the years.

“As long as we try to control the parking, which there is probably room for only 30 so it’s probably going to be first come, first served and it is going to be dry, meaning there’s no utilities. It’s at the board’s pleasure, and yes it has definitely been done before in that confined area,” she said.

Initially, organizer Michael Augustine said participants with a valid medical marijuana card could actually partake in the consumption of marijuana in what’s known as a “Patient’s Tent.”

As talks with town and county officials progressed, Augustine agreed there would be no ingesting of the substance at the park during the event.

He noted that the action significantly reduced the number of vendors who originally were interested in taking part in the expo.

“When we excluded the patient medication tent, to accomplish our goal and have the event, it kind of took out about 300 Las Vegas people. It kind of downsized it a little bit but we are still interested in utilizing the arena,” he said.

Town Board member Amy Riches was the sole nay vote on the agenda item.

Her displeasure was also connected to the fact the event is scheduled for the weekend of local Easter observances.

“I don’t feel that it is an educational thing because if it was an educational thing, all you would need is the Bob Ruud Community Center. Instead, this is like a festival to celebrate marijuana. I don’t have a problem with the medical. I have a problem with the rest of it and you do not have my support. On Easter weekend, our parks need to be for our kids and our community. It is the holiest time of the year for Christians. I have always had sunrise service in the park and now that has been taken away. I feel you are trying to sneak something in there,” she told the organizer.

According to the town, any group or individual who wants to reserve a park for an event may do so on a first come, first served basis.

For many years, Petrack Park has been the venue for Easter Sunday activities.

Augustine this year happened to reserve the site before local groups could make arrangements for their annual event.

The organizer noted that he was not aware that he was interfering with local tradition when he first reserved the park.

Chairman Harley Kulkin cautioned the board that the town cannot pick and choose who gets to use the park as long as the organization has paid its fees and secured the proper documents with the town.

Kulkin also told the room that he has never smoked pot or tobacco in his entire life.

“If these people want to have a celebration about what I consider progress then that is their right. If you don’t support it, then don’t go there. We can’t discriminate against one event over another simply because we personally have a feeling about it one way or another. That would be wrong and it’s against the principles of our country. I do support this and I want to ensure the public that we have taken every step to be very cautious as this moves forward. We have had many meetings with staff and we are going to make sure all the laws in the state and nation are followed. We are watching this closely,” the chairman said.

Following further discussion, the board voted 4-1 in favor of the vendor parking item.

The inaugural High Desert Cup Music Festival and Cannabis Expo is scheduled for April 18 through the 20th.

The community is invited to attend.