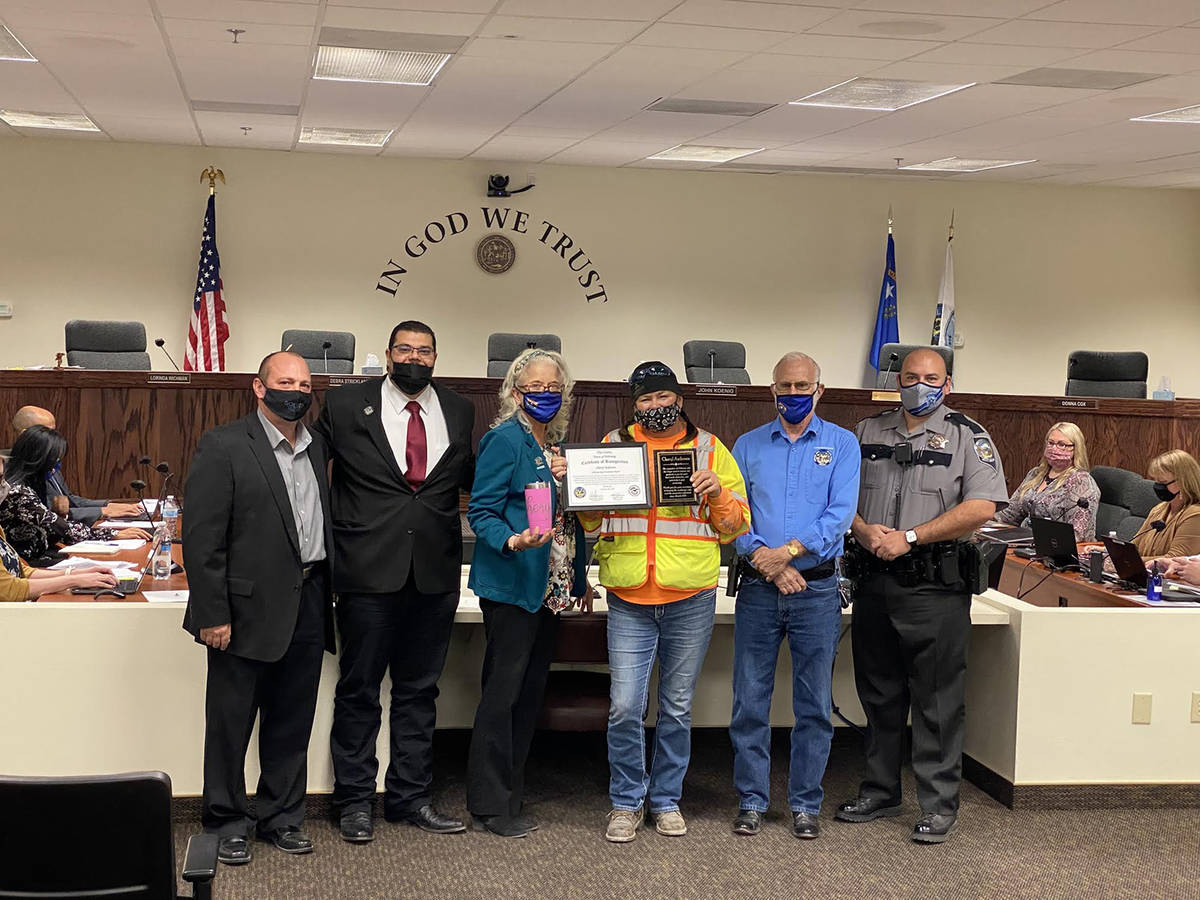 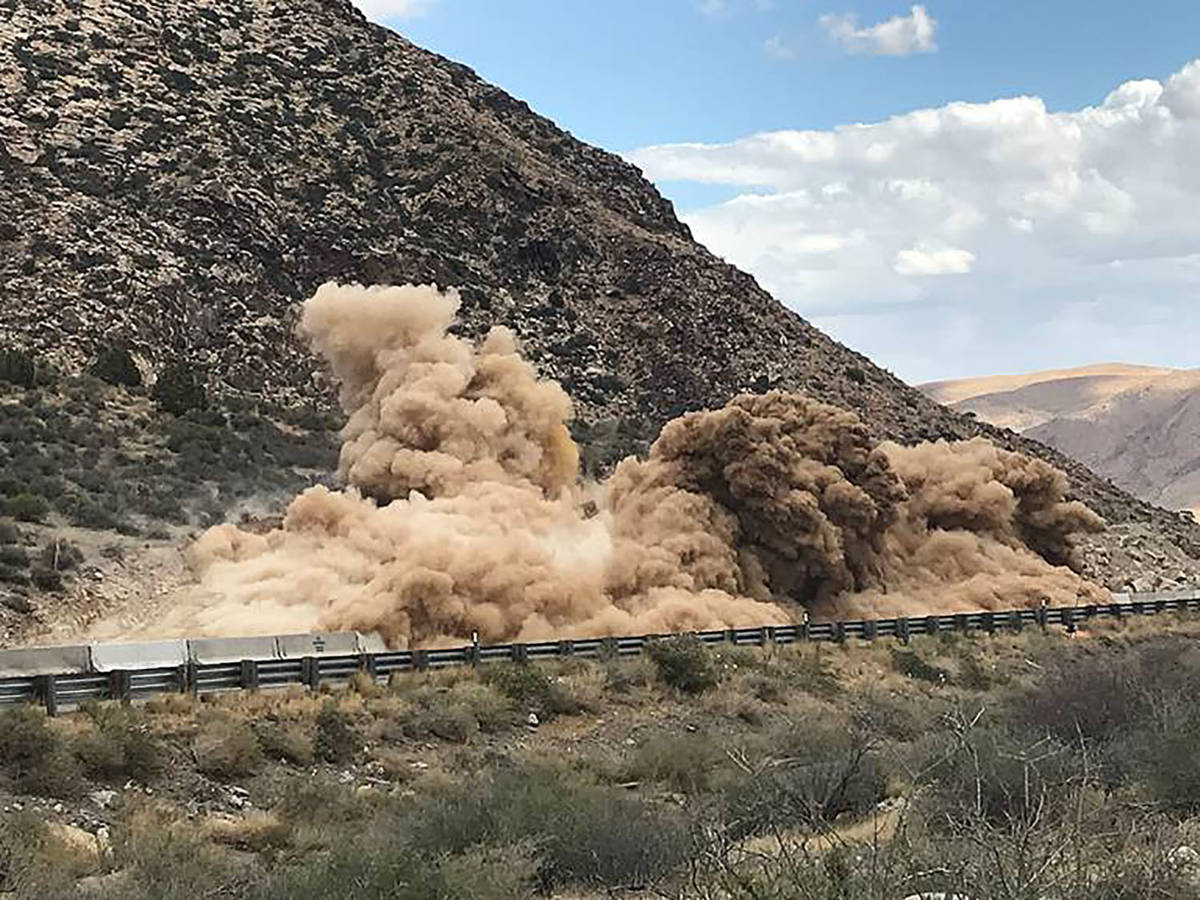 Nevada Department of Transportation One of the main focuses of the Pahrump Road-Commuters Report Facebook page over the past two years has been reporting on the blasting activities that were part of the expansion and improvements undertaken on Highway 160 between Pahrump and Las Vegas. 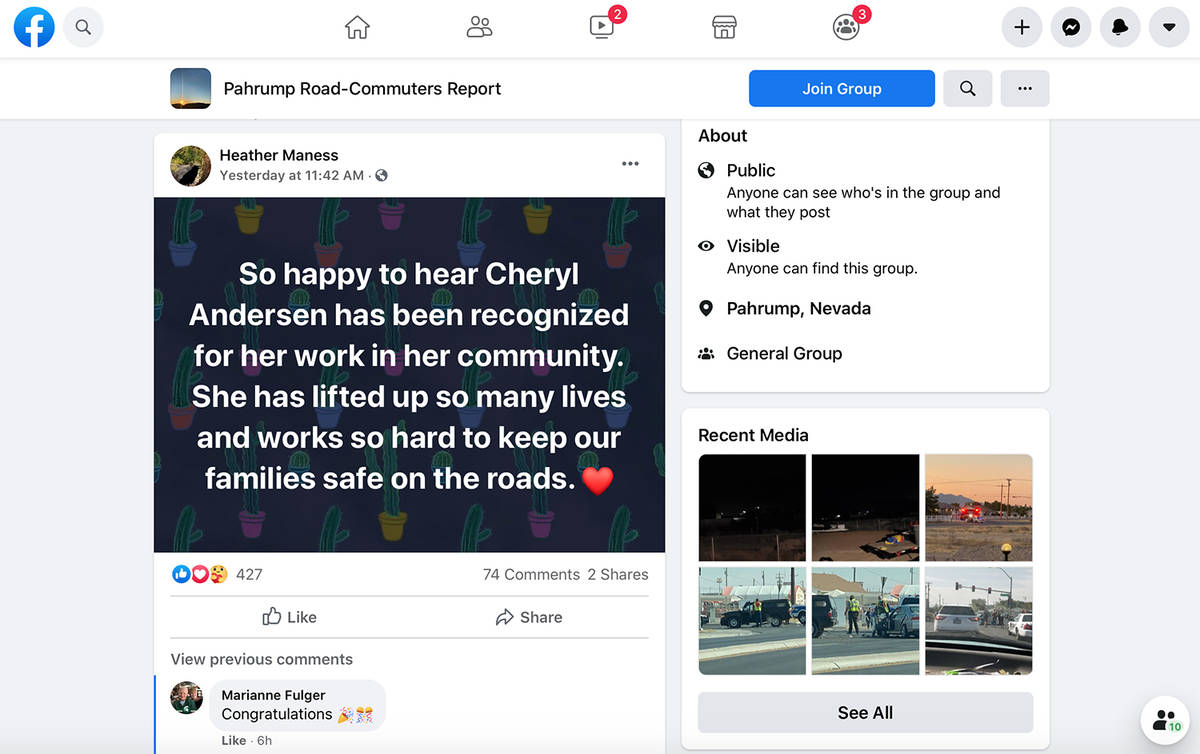 There are all sorts of people who dedicate their time and energy to helping others and in many cases, they go about their efforts unostentatiously, without any expectation of acknowledgement or reward.

This was the case for Pahrump local Cheryl Andersen, who is an admin for the Pahrump Road-Commuters Facebook page, a page dedicated to informing residents and visitors of area road and travel conditions. For years, Andersen has played a vital role in monitoring and updating the page with information for motorists and even gathering donations for those in need of car maintenance, such as new tires and oil changes and her good works, though quietly done, have not gone unnoticed.

Thousands have been appreciative of what Andersen has done over the years, particularly during the construction on Highway 160 over the Spring Mountains, which is nearing its completion, and now, she has received some official recognition by both Nye County and Nevada Highway Patrol.

During the Nye County Commission’s Oct. 20 meeting, Andersen was honored for her role in the Pahrump Road-Commuters Report Facebook page, with a presentation of a series of plaques and certificates to thank her for the valuable contributions to the community.

Nye County Commissioner Leo Blundo headed the presentations, noting that the idea itself had come from Nevada Highway Patrol State Trooper Justin Branske and he had been delighted to be able to run with it.

“County commissioner Leo Blundo, the chair of the board of highway commissioners, would like to recognize Pahrump resident Cheryl Andersen for her launching and continued dedication to the Pahrump Road-Commuters Report Facebook Page since March, 2016. On behalf of Nye County and the town of Pahrump, I send my appreciation for your dedication and service to those who have traveled to Pahrump and Las Vegas before and during the construction improvements to State Highway 160,” Blundo read before handing over his certificate to Andersen.

He then introduced Branske, who also came prepared with a presentation to Andersen, along with a personalized cup created just for her by Awards Plus.

“The commuters of Pahrump and Las Vegas want to express our gratitude to you for your hard work, dedication and generosity to the community. Thank you for your assistance in keeping the roadways safe and commuters informed since 2016,” the plaque from Branske read.

Golden Gaming casino manager Jim Melhouse was on hand during the Oct. 20 meeting, too, presenting Andersen with a $150 gift certificate to Stockman’s Steakhouse at the Pahrump Nugget. “A little gratitude. You deserve it,” Melhouse told her.

The rewards didn’t end there, either. Branske said Walmart had also been informed of Andersen’s contributions to the community and though a representative from the retailer was unable to make it to the meeting, Walmart wanted to give her a $50 gift card as a show of the company’s appreciation. Finally, Blundo presented Andersen with a certificate for dinner for two at his restaurant, Carmelo’s Bistro. “It’s the least I could do to say thank you for all you’ve been doing,” Blundo concluded.

Andersen was obviously overwhelmed with emotion at the thoughtfulness of the presentations.

“It’s really just been my honor to assist the community in their travels back and forth. It’s been a huge project and information is a lot when you’re going over and you have doctors’ appointments and all that. I am floored… by the generosity of our town,” Andersen stated, a little emotional catch in her voice. “It’s about community and every little bit we can do to help each other, it’s everything. I am honored and I am humbled. Thank you very much.”

Not long after the presentation came to a close, Heather Maness took to the Pahrump Road-Commuters page to post about the event, telling everyone, “Happy to hear Cheryl Andersen has been recognized for her work in her community. She has lifted up so many lives and works so hard to keep our families safe on the roads.”

The post saw plenty of engagement in just a 24-hour period, with 428 reactions and 74 total comments by noon the following day.

Facebook user Georgia Smith wrote, “She definitely needed to be recognized for all she did to keep us updated. Awesome job!”

There were dozens of similar posts on the Pahrump Road-Commuters page and Andersen accepted all of the accolades with a humble attitude, making sure to express her appreciation for the many page members who had helped with their own additions and bits of information over the months, writing, “We all do our part.”