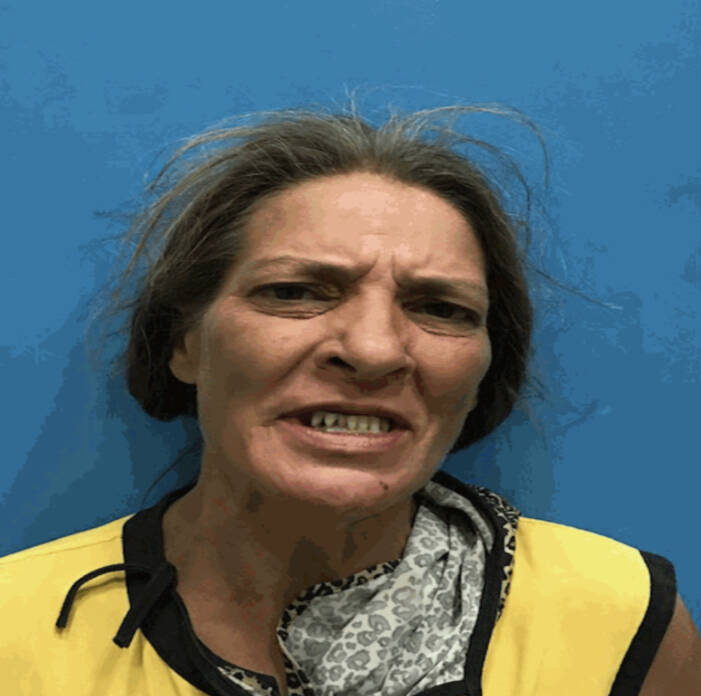 A self-professed “child of God” received no mercy when she was arrested this week for allegedly driving on a suspended license and without valid insurance.

According to a Nye County Sheriff’s Office arrest report, deputy Joshua Weaver was on routine patrol in Amargosa Valley on Aug. 22, when he observed a dark-colored minivan traveling westbound on Amargosa Farm Road with its emergency flashers activated just after 9 a.m.

Weaver then followed the vehicle for approximately a quarter of a mile.

“As I was following the vehicle, I noticed the driver appeared to be aimlessly swerving in the travel lane, then making a right-hand turn without signaling onto Valley View, headed northbound,” the report stated. “I conducted a registration check via Nye County Dispatch and upon the return, the vehicle’s registration was valid.”

A short time later after receiving the return on the vehicle’s registration, the driver, according to Weaver, pulled off of Valley View and Amargosa Valley.

“I came to a stop in my patrol vehicle and observed what the driver’s next move would be,” Weaver noted. “I notified dispatch that I was going to be out with the vehicle, which came to a stop on the side of Valley View.”

As he sat his patrol vehicle, Weaver noted in his report that the driver, described as a female with blonde hair, turned aggressively in the driver’s seat and yelled, “Who the hell are you?”

“At this time, I attempted to identify the female, who in turn, refused to provide me a driver’s license and refused to inform me if she had insurance on the vehicle,” according to the report. “I discovered through Nye County dispatch that the driver, identified as Eddie Joan Plebani, in fact had a revoked and denied driver’s license ordered by a judge in the state of Colorado.”

The vehicle was not insured, according to the report.

“Ms. Plebani went into a tirade explaining to me that she doesn’t have to have a driver’s license and that she’s privately insured and that she is a ‘child of God,’ free to travel on the roadway and does not have to obey any local laws and regulations,” Weaver stated in the report. “I then attempted to issue Ms. Plebani two citations and informed her that I was going to be towing her vehicle for driving on a suspended license and not having her vehicle properly insured.”

After hearing the news, Weaver noted that Plebani then became very agitated and standoffish and told him that she was not going to get out of the vehicle, and that if Weaver attempted to remove her from the vehicle, she would be “forced to defend herself.”

“At that time, I attempted to remove her from the vehicle by force,” Weaver stated in his report. “Deputy John Powell arrived on scene to assist and we began negotiating with the driver to come out of the vehicle willfully.”

After roughly an hour’s worth of negotiating, Plebani decided to step out of the vehicle on her own.

Going down with a fight

“When I attempted to place her into custody for obstruction, she began to resist and wrap her legs around my lower legs forcing me to go to the ground with her, where she continued to struggle on the ground and resist and caused more force to be used and was eventually placed in wrist restraints,” according to Weaver.

After deputies gained control of the situation, Plebani was arrested and taken into custody where she faces one count of resisting a public officer and was subsequently transported to the Nye County Detention Center.

Though the report did not indicate whether Plebani was in possession of a firearm or other weapon, Plebani’s roadside defense appears similar to individuals who are devotees of what’s known as the Sovereign Citizens Movement, who believe they are not under the jurisdiction of the federal government and consider themselves exempt from U.S. law.

According to the Southern Poverty Law Center, Sovereign Citizens use a variety of conspiracy theories and falsehoods to justify their beliefs and their activities, some of which are illegal and violent.