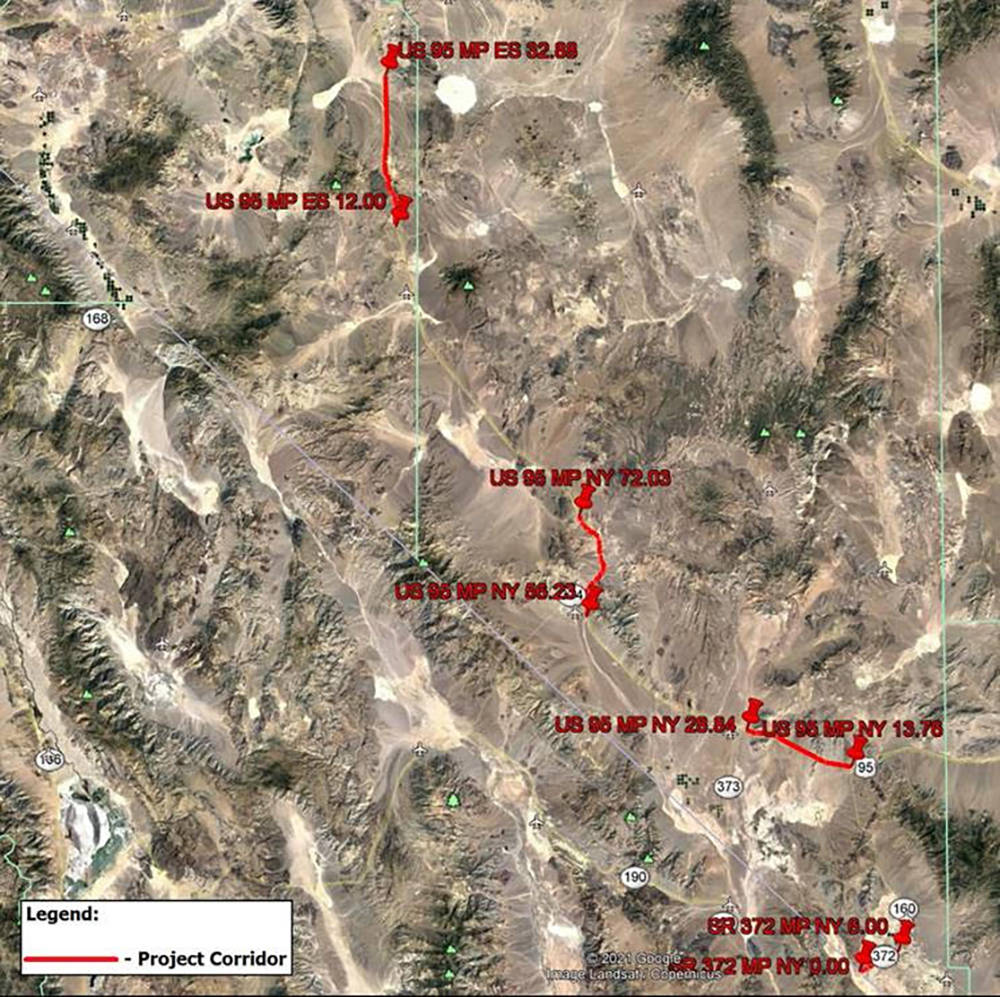 Special to the Pahrump Valley Times This map, provided by NDOT, shows the four sections of rural highway that will be addressed with a chip seal improvement project in the coming weeks.

Four separate sections of rural highway are slated for an overlay of new chip sealant following the awarding of a construction contract by the Nevada Department of Transportation.

The announcement was made on Tuesday, July 13 with NDOT Public Information Officer Tony Illia, detailing that the contract was awarded on July 12 to VVS International Inc., a West Sacramento, California-based company. The $3.46 million project consists of 58 miles of pavement improvements in both Nye and Esmeralda counties. The targets sections of highway, according to a news release, see an average of between 1,100 and 4,200 vehicles traversing the roadways each day.

“Project plans call for applying chip seal to U.S. Highway 96 from mileposts 13.76 to 28.84 and 56 to 72 through Beatty in Nye County as well as mileposts 12 to 32.88 near Goldfield in Esmeralda County. Additionally, State Route 372 (Charles Brown Highway) will receive a chip seal enhancement from the California border to milepost 6 through Pahrump in Nye County,” the news release states.

Illia explained that chip sealing is a pavement surface treatment combing layers of asphalt and fine aggregate, which is spread across the roadway as a much cheaper improvement measure than traditional pavement. “It’s a cost-effective maintenance solution that prevents further roadway deterioration, extending the highway life cycle for a smoother, safer driving experience,” he stated.

As with any major road improvement project on Nevada highways, motorists can expect to experience some delay when heading along any of these sections of roadway but those delays should last no longer than half an hour.

“A flagging and pilot car operation will safely chaperon vehicles through the active construction zones,” the news release reads. “There will be only one work zone at a time, with work zones limited to five miles along U.S. Highway 95 and three miles along State Route 372. Motorists can expect minor travel delays not exceeding 30 minutes. The state-funded 40-working-day project will create 44 direct, indirect and induced local jobs. The project is expected to start later this month with an anticipated completion in early September.”

When asked for further clarification on the precise start date for the $3.46 million project, Illia told the Pahrump Valley Times that crews are tentatively scheduled to begin on Wednesday, July 21, although this could change. In addition, Illia told the Times that the project will begin at the northern-most portion of targeted roadway, near the town of Tonopah, and will continue to work south, wrapping up in Pahrump.

Drivers are urged to exercise caution and patience when traveling through the work zone and must heed all construction signage. If possible, motorists should also consider alternative routes. “NDOT works with Waze to inform the public about planned highway restrictions, but unscheduled construction changes, closures and restrictions are possible due to weather or other factors,” the release states. “For the latest highway conditions, visit nvroads.com or call 511 before driving.”