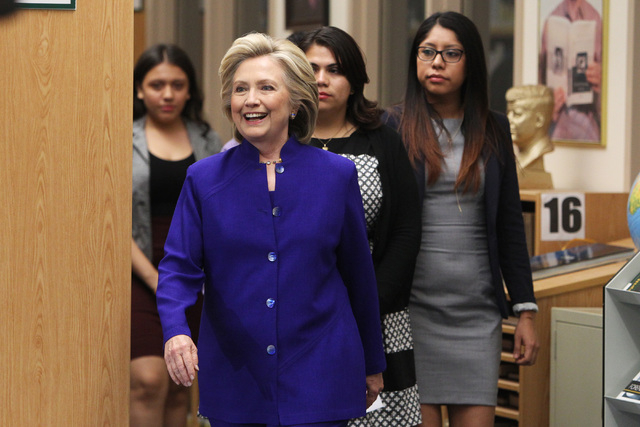 U.S. Sen. Harry Reid has said he was confident the Yucca Mountain project would remain dead through the term of the current president “and the next one.” That was a reference to his White House choice, Hillary Clinton.

When she ran for president in 2008, Clinton opposed the controversial Nevada nuclear waste project. But was that a crack of wiggle room in an interview she gave June 18 to political pundit Jon Ralston?

Ralston asked if Yucca Mountain as a nuclear waste dump would be “off the table” in a Clinton administration.

“Well, it is off the table based on what I know right now,” she responded.

Clinton said she has opposed the project “based on the research that was made available. We do need to figure out what we’re going to do with nuclear waste.” She mentioned the commission that has recommended new strategy rather than “just default to Yucca Mountain.

“Let’s talk to the experts, and let’s try to determine what’s the best place, the different states and regions of the country should use for this disposal.”

Ralston: You’re not keeping it completely off the table? You’ll keep it in mind if new information comes to light?

Ralston concluded Clinton was “not unequivocal” on Yucca. A Clinton aide said over the weekend she answered the question the same way in 2008, and she still has concerns about the program.

Speaking for Reid, aide Kristen Orthman said that Yucca is dead, “and the reason it is dead is thanks to Democrats like Bill Clinton, Barack Obama and Hillary Clinton.”

Others running for president vary on Yucca Mountain. Bernie Sanders is against Yucca. Marco Rubio, Ted Cruz, John Kasich and Ben Carson have said they would favor opening the site to nuclear waste.

In Reno last month, Jeb Bush said he does not believe high-level nuclear waste will end up in Nevada, saying “we need to move to a system where the communities and states want it.” Democrats were quick to point out Bush’s membership in an industry group that has supported the Nevada site.