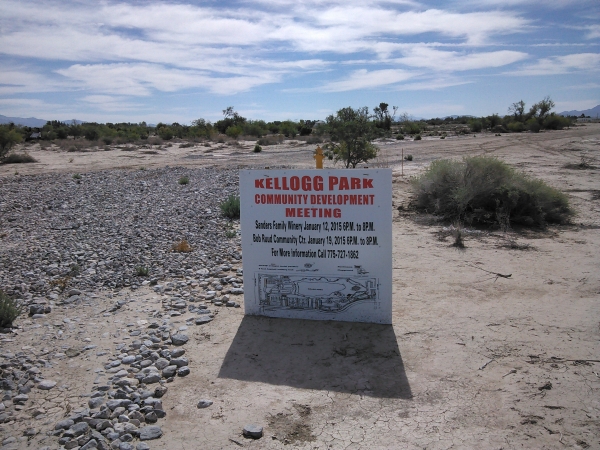 The plot of land designated for the creation of Kellogg Park is beginning to take shape as the Nye County Board of Commissioners approved moving forward with the project last month.

Last year the town of Pahrump proposed the development of a seventeen-acre community park at the 80-acre parcel on the valley’s south end.

The proposal outlined additional phases and required funding to complete the conceptual plan, which was adopted and recommended by the town of Pahrump Parks and Recreation Advisory Board and the town board.

Commissioners approved the use of $1,000,000 from the town’s Impact Fees and Room Tax Funds to bankroll the first phase of the park.

Luis made sure to note that the facility will be a community park, as opposed to a sports complex.

“We are going to go as far as we can with the $1,000,000,” he said. “We are taking the existing mesquite trees and designing the park to what’s already there. We are keying on getting the natural habitat back in there by going with native plants and seeds.”

Luis also said he envisions a park setting that can also teach visitors about the natural ecosystem.

“We want to put little markers along the half-mile walking trail,” he said. One could be about the common jackrabbit with a little information about its habitat. There could be one about the quail or a number of different kinds of wildlife living in southern Nevada. It’s a great way to teach kids about nature firsthand.”

Water conservation was another concern Luis had.

He said unlike the other parks in the community, Kellogg Park will have just one small grassy area in the middle of the first phase, to save water.

“We really took water into consideration,” he said. “It will be a 17-acre project, but only one acre of grass. “Ian Deutch Park is 21 acres and 95 percent of it is grass. We want to keep this as a natural habitat as much as we can.”

With waterlines recently introduced to the park, Luis said an engineer is looking at the existing well on the land to design an irrigation system.

“Now he’s got to determine how many gallons we can get out of it and what our demand will be,” he said. “Our next step is to get an engineer to give us a site plan that’s a step above this, and then draw up a construction set of plans and those are going to be pretty big numbers.”

Luis said he hopes to have the first phase completed by July of next year, while trying to be “good neighbors” to the residents who live adjacent to the area.

“You always seem to run into some issues somewhere along any type of project,” he said. “We are really trying to be neighborhood-friendly, but again, it’s a community park and that’s the goal.”

Local resident Eugene Frank was chairman of the Parks and Recreation Advisory Board when discussions first took place about establishing Kellogg Park.

“There are no parks on the south end of town because all of the parks are on the north end,” he said. “This will be the first park on this side of town. I know water is a very sensitive issue in this town and we are very water conservation conscious, so the design of the park will seriously be taken into consideration. Matt Luis and the commissioners are very conscious of that.”