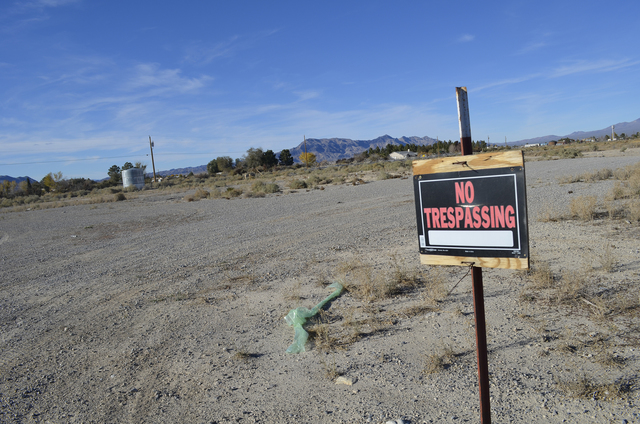 Nye County commissioners rejected the extension of time for the development agreement between Nye County and Wilson Capital Nevada for the Pine Lakes Estates development. No construction has happened at the East Wilson Road site since the last agreement in 2011. Daria Sokolova/Pahrump Valley Times

Nye County commissioners rejected the extension of time for the development agreement between Nye County and Wilson Capital Nevada for the Pine Lakes Estates development in Pahrump.

“Staff will not recommend approval if we have too many unanswered questions,” Nye County Planning Director Darrell Lacy said.

“The agreement has had very little activity done for this project, if any,” Lacy said.

Also, the property is adjacent to but not in the Utilities, Inc. of Central Nevada service territory. Lacy said officials don’t know how the developer plans to provide water and sewer for the property.

“There are a few issues regarding utilities and infrastructure available here. However the zoning is such that you can come back at any time in the future and ask for this development under the current development standards that were being affected at that time,” Lacy said.

Darrin Pappa of Las Vegas-based Megacon, who represented Wilson Capital Nevada at the meeting, said the company wants to get an extension of time for the development agreement.

“Although my background with the project is limited, I do know that development plans have been prepared, and a drainage study, traffic study with the intent of building this project,” Pappa said. “I believe public works has a lot of the documents on file, so there has been money that was put forward to develop the site. Then the economy tanked, and then, in addition to that, there was some litigation with the project that tied it up within about the last year or year-and-a-half or so.”

The voting down doesn’t preclude the applicant from submitting a new development agreement to Nye County, officials said.

“We have no problem working with the developer, but we would like to nail down the specifics. We need answers to important questions – is it a mobile home park, what design standards, water and sewer issues, how soon do you plan to build, etc.,” Lacy said.

“We do not want to stop all development but what staff recommends should be in conformance with new water conservation standards and the master plan with a time limit on the approvals to encourage actual construction and jobs, not land speculation,” he said.