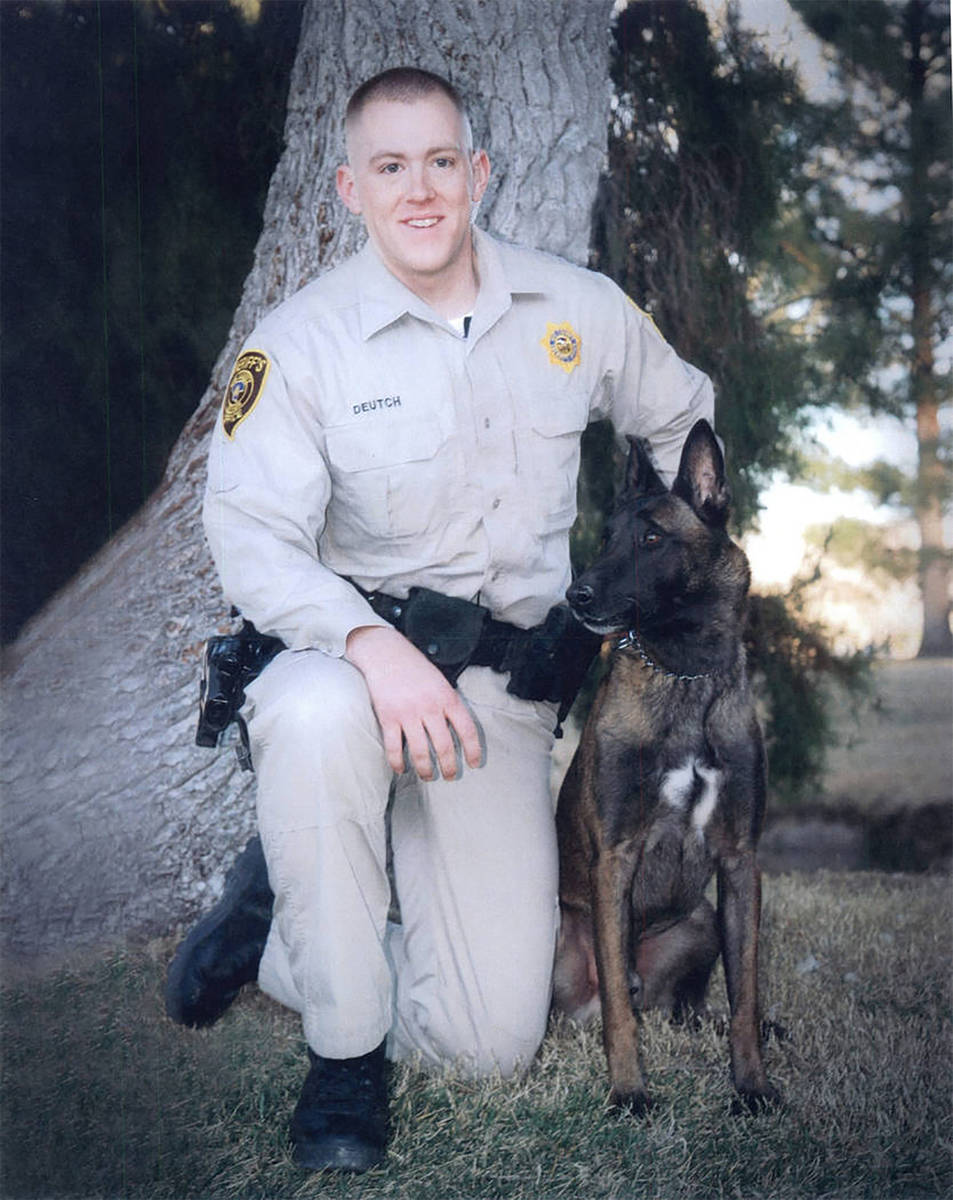 Special to the Pahrump Valley Times Nye County Sheriff's Deputy Ian Michael Deutch was shot and killed after responding to a domestic violence call at the Lakeside Casino on the afternoon of April 26, 2010. Deutch is pictured with his K-9 companion Chico. 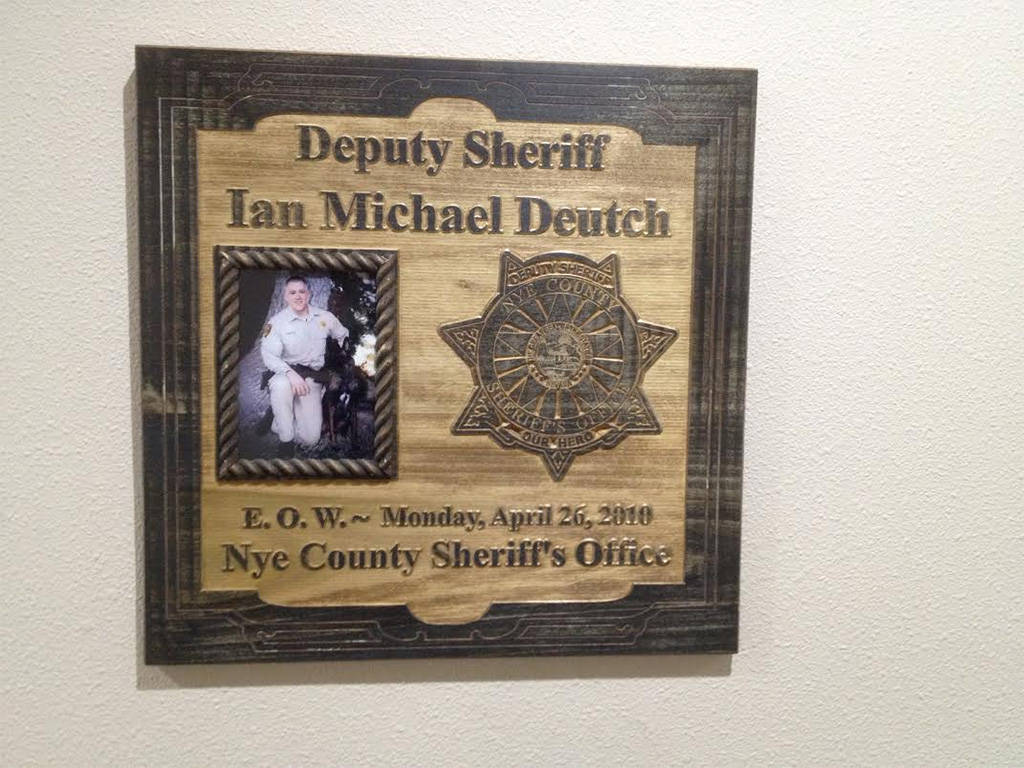 Southern Desert Regional Police Academy honored Nye County Sheriff’s Deputy Ian Deutch with a memorial plaque displayed in the main hallway outside a classroom at the facility. Deutch was fatally ambushed while responding to a domestic violence call in the parking lot of Lakeside Casino and RV Park on April 26, 2010. Special to the Pahrump Valley Times 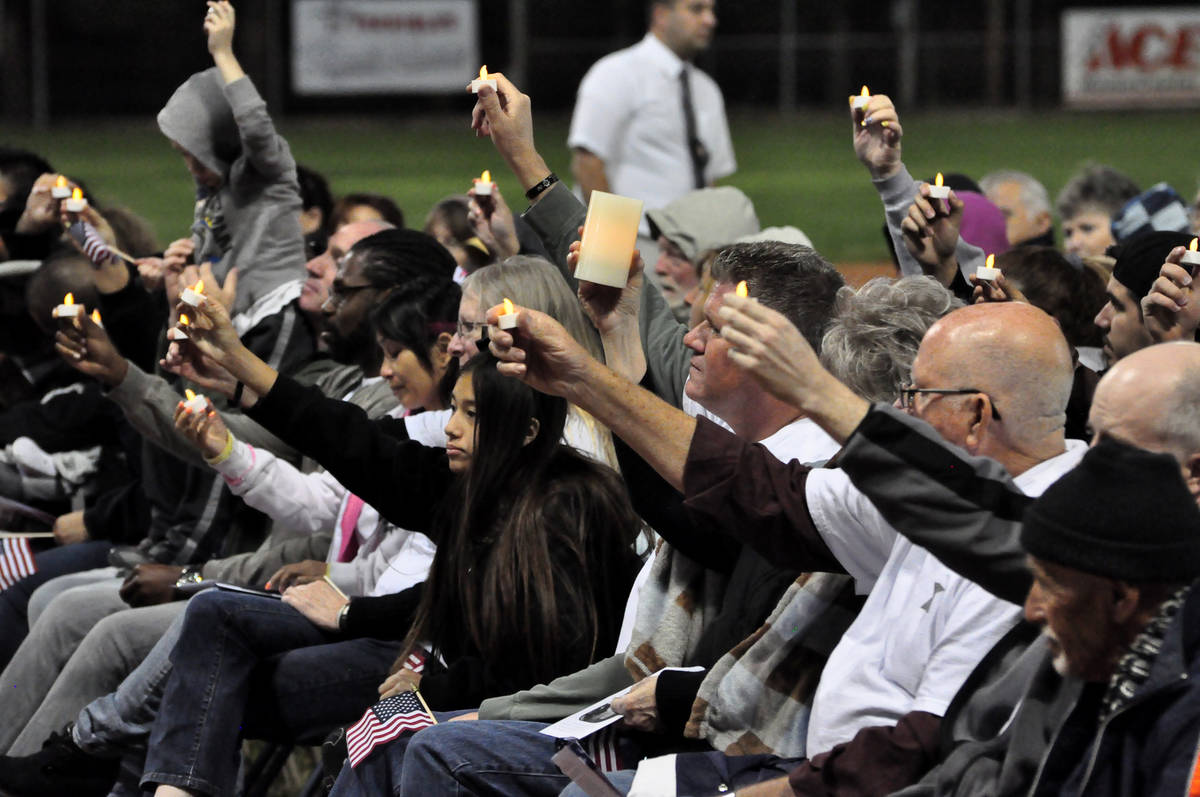 Horace Langford Jr. / Pahrump Valley Times - Friends and family hold candles in remembrance of fallen Nye County Sheriff’s Deputy Ian Deutch at the April 26 ceremony to mark the fifth anniversary of his death in the line of duty. The ceremony was at the park that now bears his name.

At the time, Deutch was responding to what’s known as a “rolling domestic,” just before 4 p.m.

“The victim was being chased and shot at by her boyfriend,” Wehrly said, by way of the sheriff’s office Facebook page. “She pulled into the Lakeside Casino for protection and he followed. Deputy Deutch responded, and as he exited his vehicle to assist the victim and protect the lives within the casino, he was shot.”

Wehrly went to say that an additional deputy responded to the scene where he shot and killed the suspect.

She also noted that Deutch’s death shocked the community, and reminded everyone of the dangers faced by the Nye County Law Enforcement officers every day.

“On this day, I ask that our community remember Ian Deutch and all of the other officers who have made the ultimate sacrifice,” she said in part. “I also personally want to thank all of our Nye County deputies, sergeants, detectives and administrators who serve Nye County each day, not knowing if they will be coming home at the end of their shift, a price we pay to keep us safe.”

As a tragic irony, Deutch, 27 at the time, was a six-year veteran and had returned to duty at the sheriff’s office in March of 2010, after a deployment to war-torn Afghanistan as a member of the Army National Guard 221st Cavalry Wildhorse Squadron, serving at the rank of staff sergeant, where he served as a squad leader and a forward artillery observer who identified Taliban targets for artillery strikes outside combat outposts, according to his obituary.

Locally, Deutch earned the Medal of Valor, Heroism Award, Distinguished Service Award, and K-9 Service Commendation for actions performed during his service to the community of Pahrump.

Deutch, a husband and father of two, left behind two brothers and two sisters, along with numerous additional family members, including his parents.

Not long after his death, town officials elected to rename Pahrump’s Honeysuckle Park, to Ian Deutch Memorial Park, in honor of his memory.

In total, Sheriff Wehrly said Nye County has lost eight officers in the line of duty since 1867.