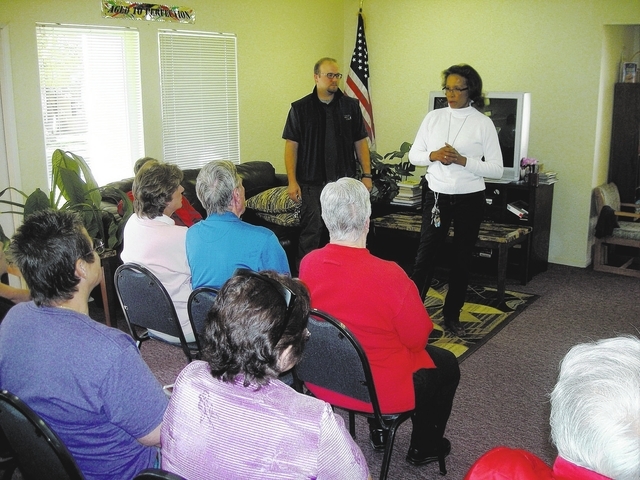 A year and a half after filing a complaint, Amargosa Valley resident Linda Bromell got at least a partial answer Tuesday on her request for an investigation into the public administrator’s handling of his late sister’s estate.

The answer from District Attorney Brian Kunzi: Nye County commissioners can’t do much to regulate how Public Administrator Falkon Finlinson’s office enters homes to handle the estates of people who didn’t leave a will.

Bromell said property was missing from her sister Barbara Marie McSweeney’s home after her death, which wasn’t padlocked by the public administrator’s office. Bromell said drugs also weren’t removed from the house. She sent a letter May 25, 2012 complaining there were inconsistencies in what she was told at an April 16, 2012 meeting with county officials. Bromell told commissioners on July 3, 2012 she didn’t see any control over the public administrator’s office.

As of two months ago, Bromell said she hasn’t received a reply about an investigation the Nye County commissioners asked the Nevada Attorney General’s Office to conduct of Finlinson in July 2012.

“This problem affects everyone in Nye County unless you’re not planning on dropping dead. This is a serious problem since the Dyers were arrested 15 years ago for stealing from the estates,” she said.

“We still have a public administrator with no supervision, no background check, going into people’s houses with no oversight,” Bromell said.

“Something needs to be done. This is serious; it’s been ongoing on for 15 years. The code that was revised was supposed to keep him from doing this. What do we have to do? Do we need a lawsuit? I don’t understand,” she said.

Bromell also addressed commissioners in January 2013, when they passed an ordinance requiring the public administrator to investigate whether there is a qualified person able to serve as administrator of the estate and if there is no qualified person and the estate exceeds $10,000, petition the court for letters of administration. It also tightened up requirements for filing quarterly reports with the county commission to include a list of all estates administered, including the name of the decedent, date of death, date the file was opened, the approximate gross value of the estates, money collected and spent by the public administrator.

“I will tell you concerns about whether the public administrator is going in without relatives around, there’s nothing we can substantiate,” Kunzi said. “The public administrator has a duty to go in and protect property if there’s someone not immediately available and you as a board can’t interfere with that. You’re creating liability problems.”

Last November, the public administrator and his deputies attended a meeting at the Spring Mountain Apartments, a Pahrump senior living facility, to hear complaints by Margie Rigby of Riverside, Calif., who said her mother, Mary Dawson’s jewelry box and other belongings had been moved after her death. Rigby said she was informed about the death by the public administrator’s office instead of sheriff’s deputies. She said there were instructions on contacting next-of-kin in her mother’s apartment.

“To put someone’s name on the refrigerator who is a friend does not mean the public administrator has to stay out,” Kunzi said.

But Kunzi admitted “there is a recipe for a problem” with public administrator’s offices in rural counties, where they’re unpaid and rely on receiving money from the administration of estates. Clark County has a paid public administrator and Washoe County recently began paying theirs, he said.

“It’s a sad commentary. The state has looked at this and looked at he has to have a salary to run his office. That way it would be run like all the other elected offices. Why the Legislature hasn’t elected to do that I don’t know,” Kunzi said.

Commissioner Lorinda Wichman said in Esmeralda County a sheriff’s deputy accompanies the public administrator when they go into homes. Kunzi said it doesn’t matter what that county does.

“It is the public administrator’s obligation to go in and secure the property. It’s done for the purpose of trying to protect the assets to make sure the assets aren’t walking out the door,” Kunzi replied. “But unfortunately nothing presented to us gives us anything we can pursue. If we have hard facts those type of things are happening, it’s not going to be ignored and we are going to look at it. It’s the age-old problem, well grandma had 10 guns and now there’s not.”

“There’s got to be something very tangible to show us what was in the house,” he said. “Another problem is a lot of these estates have gone through probate and nobody is complaining. That’s when heirs need to stand up and complain.”

Kunzi said the county wouldn’t just have to fund the public administrator’s salary but deputies. But he said if the county wants to request the state consider future legislation, it could be put on a future commissioner’s agenda. Commissioner Donna Cox was in favor of the idea.

County Manager Pam Webster suggested people could set up a register with the sheriff’s office containing information on their will and their heirs while they’re still alive. Kunzi said the county commission can’t order the sheriff’s or public administrator’s office to look at such a registry, he said the better solution would be to fund the office. But Schinhofen questioned where the funding would come from.

Finlinson, an Amargosa Valley resident running on the Independent American Party ticket, squeaked out a 6,755 to 6,469 vote win over Democrat Donna Jokinen to win his first term in November 2010.

He was scheduled to take office in January 2011, but former Public Administrator Bob Jones, Nye County’s facilities manager, resigned prematurely on Dec. 13, 2010 after he was attacked and robbed in his home by bandits who forced him to open safes where supposedly valuables from estates were kept.