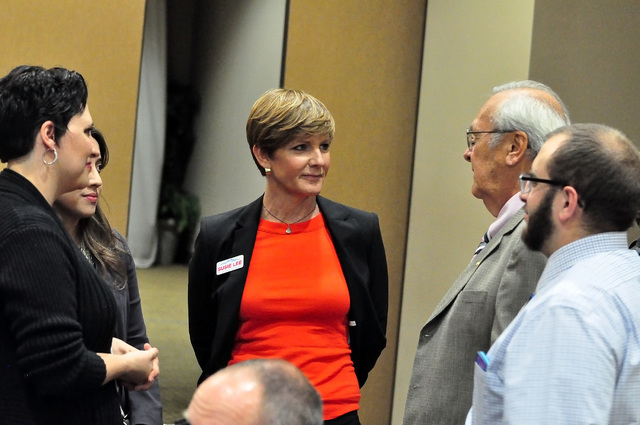 “I want to represent everyone in 4th Congressional District, so I won’t be a stranger to Pahrump, that’s for sure,” she said recently at the Nye County Roosevelt-Kennedy Democratic dinner in Pahrump.

Recently, Lee was endorsed by EMILY’s List, the nation’s largest resource for women in politics.

On June 14, Lee will compete against seven other Democratic candidates for the party’s nomination to face Republican incumbent Cresent Hardy. Her two most prominent contenders are Nevada Senator Ruben Kihuen and former Assemblywoman Lucy Flores. Other candidates in the race are Dan Rolle, Brandon Casutt, Mike Schaefer, Rodney Smith and Morse Arberry Jr.

Lee touts herself as an education advocate. She has worked with Communities In Schools and ASAS. Additionally, she served on the Superintendent’s Educational Opportunities Advisory Committee and the Clark County School District English Language Learners Program Task Force.

She currently leads her opponents in fundraising. Lee’s campaign raised approximately $18,600 this quarter. She has a total of $1.09 million in cash on hand.

By comparison, Ruben Kihuen’s campaign said he raised $59,000 in April and $790,000 overall. Former Assemblywoman Lucy Flores’ campaign reported $143,000 in contributions last month and $159,000 cash on hand. Her campaign didn’t return requests for her most recent fundraising numbers. The five other candidates are not expected to raise a significant amount of funds before the June 14 primary.

Similar to her opponents, Lee advocates for equal pay for equal work, sick leave and increasing the minimum wage.

“There is a distinction to be made in that Susie has spent her career helping others while her opponents do whatever they can to win another election,” said Jonathan Pattillo, Lee’s campaign manager.

“We have run an aggressive campaign that has contacted thousands of voters so far and held dozens of house parties across the district, including Pahrump. We have touched every county of this district and will not take any vote for granted,” Pattillo said.

In an interview with the Pahrump Valley Times, Lee said a proposed Yucca Mountain nuclear waste repository was a “huge threat.”

She said Nevada was on the cusp of developing renewable energy. As a congressional representative, she said she would incentivize companies to develop it in Nevada.

“I think that Nevada is on the forefront of green renewable energy,” she said.

Lee also said there should be an incentive-based system to encourage people to conserve water.

“This will be a huge issue as a congresswoman to deal with, a regional water usage plan. So, it’s definitely something that I’m committed to,” she said about water conservation.

The district had 137,352 active Democratic voters at the end of April, according to the Nevada Secretary of State. Nye County accounts for 7,276 of those active voters.

Lee is one of the four Democratic candidates who will participate in Nye County Democratic debate. The event will take place from 5 p.m. to 7 p.m. on May 19 at the Pahrump Senior Center.