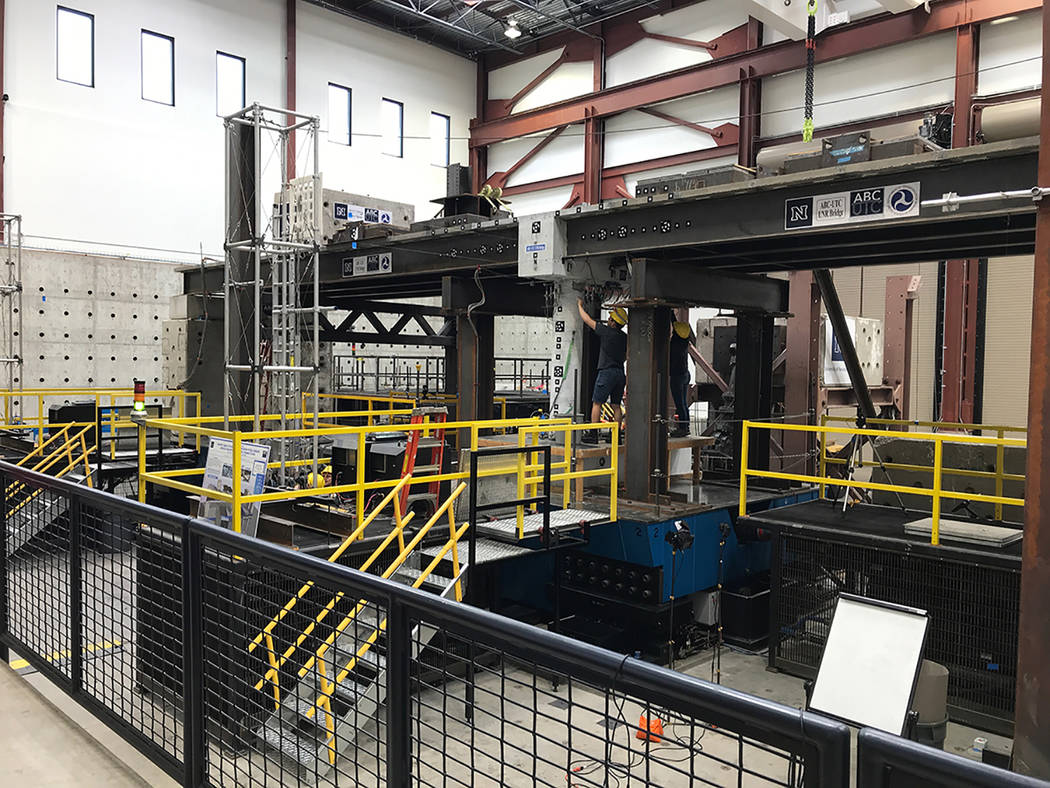 The tests in April subjected a 70-ton, two-span, 70-foot-long bridge to multiple earthquake simulations of approximately magnitude 7.5. The hydraulically driven tables, programmed to mimic the forces of an earthquake, tested six different kinds of bridge connections integrated into a single bridge.

Each individual connection had been previously tested on its own at the University of Nevada, Reno.

“The individual connection tests had given us very good results for each connection,” said Saiid Saiidi, principal investigator of the project, professor in civil and environmental engineering at the university and director of the Center for Advanced Technology in Bridges and Infrastructure.

“And for the first time, our study combined these connections in a single bridge which endured realistically strong earthquakes. We knew that going into this that our individual positive tests did not inherently mean that all of the connections would work together, making this a necessary test.”

Together, Saiidi and his team of College of Engineering doctoral fellows, doctoral candidates, graduate and undergraduate assistants, were looking for two specific outcomes: of the six connections, four were designed to be undamaged, even during strong earthquakes, and two were designed to undertake a controlled amount of damage to serve as a fuse, to absorb the forces of the earthquake by breaking.

“Along with avoiding collapse, the outcome of our study showed that all of the six connections performed as expected,” Saiidi said. “It will be a few months before we can evaluate data from the 280 sensors that we had in the bridge to get more insight about the connections – including transducers, accelerometers, potentiometers, string potentiometers and strain gauges all to record the forces the connections experienced – but we are now confident to recommend these connections for application in real bridges.”

The shake-tables started with movements at 150 percent of the simulated earthquake magnitude, and each subsequent test ramped-up the movement by 25 percent. The simulated earthquake mimicked the large ground motions of the deadly and damaging 1994 Northridge, California earthquake. Ultimately, the goal was to prove the connections were ready to be a part of the expedited bridge construction techniques and help provide earthquake safeguards.

“I was very pleased with what we learned,” Saiidi said. “Not only do we have a better understanding of how the connections work together, but we have the data now to see how they react under extreme, off-the-charts conditions, meaning we can prepare for more than what is expected.”

“There are many aspects of bridge construction and safety that ABC-UTC is researching, such as ease of construction and durability of joints,” Saiidi said. “The University of Nevada, Reno is part of the seismic performance portion of ABC-UTC-Seismic, which is the most critical aspect when it comes to bridge connections.”

The specific mission of ABC-UTC-Seismic, the project being led by the University of Nevada, Reno, is to develop earthquake-resistant precast bridge components and systems and transform research data into seismic design guidelines to help expand the utilization of accelerated bridge construction methods in moderate and high seismic zones.

The University’s Earthquake Engineering Laboratory combined with the Large-Scale Structures Laboratory, are the biggest, most versatile large-scale structures and earthquake/seismic engineering facilities in the United States, according to the National Institute of Standards and Technology.

This allows Saiidi and ABC-UTC-Seismic to obtain research data and results in order to create the models they need to add to accelerated bridge construction methods and provide safety guidelines as building techniques evolve.

“These are the roots for what ACB-UTC itself and its seismic studies will use in the future of bridge construction and development, and it’s very important that it’s being done at the University because we have the ability to test beyond regular constraints,” Saiidi said.

As well as creating the project’s base guidelines and practices, Saiidi and the University are also a part of transitioning the collective knowledge of ABC-UTC-Seismic into an educational environment. The Seismic project includes the involvement of University of Nevada, Reno post-doctoral fellows, doctoral students, MS students and undergraduate student working to develop course modules on earthquake engineering techniques.

ABC-UTC also sponsors technical sessions at national and international conferences, presents research results at these meetings and disseminates the most recent findings to relevant Transportation Research Board and American Association of State Highway and Transportation Officials committees.