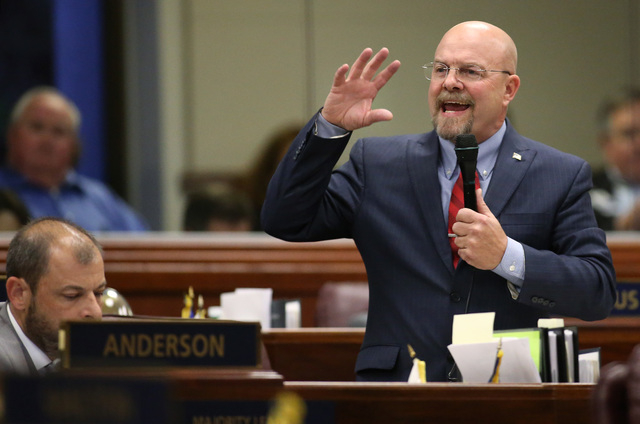 On the flip side, only two of 14 measures eliminating crimes or reducing penalties passed the 2015 session that ended June 1.

Steve Yeager, a deputy public defender in the office, said 2015 was a tough-on-crime session that will have financial consequences for the Department of Corrections and taxpayers.

“In the 2013 session we were doing a good job of looking at alternatives,” he said. “This session we took a step backwards.”

One measure making a third graffiti offense a felony and another requiring prison time for a driver who leaves the scene of an injury accident that he causes are just two of the measures that could add to Nevada’s prison population, Yeager said.

One victory was the failure of a measure dealing with prescription drug trafficking that he said would have required prison time for someone who essentially had a handful of pills.

The cumulative effect of the many measures was not looked at by lawmakers, Yeager said.

But Assembly Judiciary Chairman Ira Hansen, R-Sparks, said he does not believe the bills that were heard in his committee will have a material effect on the prison population.

All the measures were thoroughly vetted with the Corrections Department, the judiciary, district attorneys and the public defenders, he said.

“The idea that we did not consider the long-term ramifications is not the case,” he said. “I bet there is no inmate expansion at all.”

The Legislature approved measures to use more house arrest and new technology, such as GPS, to deal with offenders, Hansen said.

The tougher penalties should result in a reduction in crime, he said.

“We balanced the need to protect taxpayers with protecting average citizens from predatory people,” Hansen said.

The public defender’s analysis suggests that if each of the 27 new laws results in five prison sentences of two years, there will be 135 new inmates at a cost of about $20,000 a year per inmate, for a total cost of $5.4 million over the biennium.

While it is unlikely to happen this session, the Department of Corrections might have to reopen the shuttered Southern Nevada Correctional Center at Jean in the next biennium to handle inmate growth, a costly proposition, Yeager said.

Just getting the prison ready for inmates would cost an estimated $7 million.

The Corrections Department did not request funding to reopen Jean in the upcoming two-year budget.

Despite concerns about the effect of the new laws, there was some positive action in the session, including $3 million more per year to expand the specialty courts, which are designed to keep offenders out of prison by offering treatment for drug and mental health issues, among other targeted populations. The funding will allow the courts to accommodate another 800 to 900 people a year.