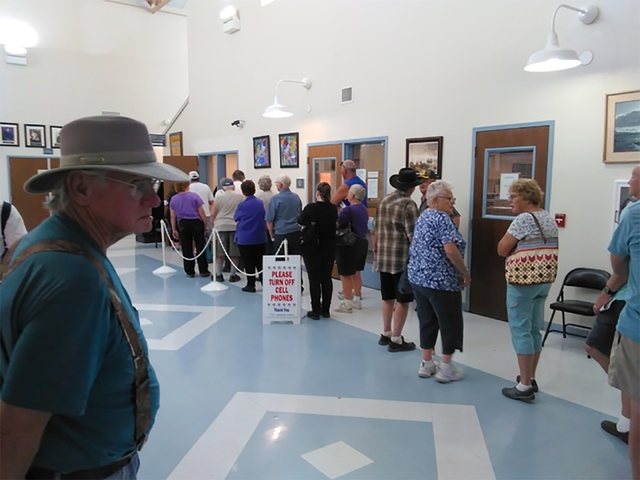 Nye County Clerk Sandra “Sam” Merlino said there is no chance the 2016 General Election will be rigged, a claim that Republican presidential candidate Donald Trump has been proclaiming during his run for the presidency. Early voting in Nye County begins on Saturday. Selwyn Harris / Pahrump Valley Times 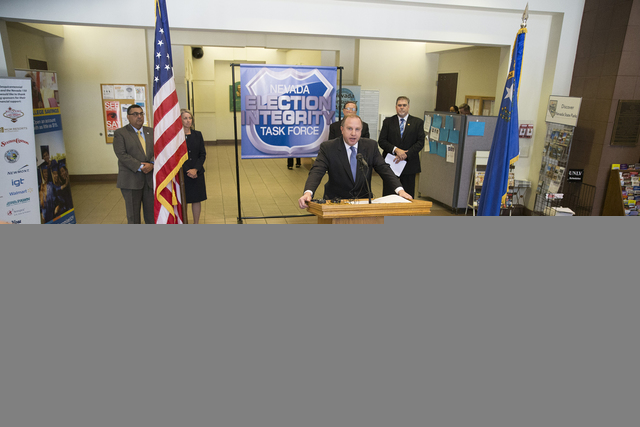 With a mere two weeks before the general election, Nye County Clerk Sandra “Sam” Merlino is debunking Republican presidential candidate Donald Trump and others’ claim that the election will be “rigged.”

“As far as the election being rigged, at least here in Nye County, it’s not going to happen and it never has happened,” she said. “There has never been a case of any type of voter fraud or a rigged election that we know of. It may have happened years and years ago. I don’t know because we don’t go back that far.”

The comments about rigged elections have more than Merlino publicly discussing the election process.

The state’s top election and law enforcement officials assured Nevadans on Tuesday that their votes are safe from fraud.

At several recent campaign rallies over the past few weeks, Trump has run with the rhetoric that voter fraud is a serious problem. He has encouraged his supporters to “go around and look and watch other polling locations,” which has raised concerns about voters feeling intimidated at those voting spots.

Rouse, while not specifically referring to Trump, said such perceptions would cast doubt on the validity of the nation’s elections, which would only undermine the governmental process upon which the United States is built.

Merlino, who has been the clerk for 16 years, spoke to the Pahrump Valley Times about the difference between what’s termed “voter fraud” and “voting fraud.”

“In Pahrump recently, there was someone who was helping assist voters to register and was charged with falsifying some of those records,” Merlino said. “That person was caught and that is a different type of voter fraud. We try to be very diligent in catching that, which we did.”

Merlino said in Nevada, each county has the same type of system where officials use exit ballots.

She recalled a recent conversation with an individual regarding absentee ballots and the chance of using the ballots to alter the results of the election.

Merlino said every voter is issued a numbered ballot where her office keeps tight track of how many were sent out and how many were returned. Her office gets questions from many residents who claim they heard the absentee ballots are not even counted.

She countered that claim by saying every absentee ballot is counted so long as it reaches the clerk’s office by 7 p.m. on Election Day.

“All of the absentee ballots are counted unless the signature doesn’t match or they haven’t signed the back of the envelope,” she said. “If that’s the case, then we will not count that ballot. That is the only reason why we would never count a ballot.”

Merlino noted that there are also safeguards in place to prevent individuals from voting more than once in the state of Nevada. If an individual chooses to vote early and has also requested an absentee ballot, the system will not allow the clerk’s office to process that voter.

“They have to surrender their absentee ballot and we go through a process of canceling it and having them sign an affidavit, or they don’t get to vote early,” she said. “On our roster, there’s a notation next to every name that says if someone has voted early or voted absentee. That notation next to their signature tells our employees not to allow that person to vote on Election Day because they’ve already voted early or absentee.”

The electronic voting machines voters use to cast their ballots, Merlino said, cannot be compromised to skew the votes, as there are before-and-post checks to the system.

“One thing everybody should remember is these are stand-alone machines,” she said. “They are not hooked up to the Internet. They are plugged into the wall so that they have power. There’s absolutely no way those machines can be hacked the way they are standing on the floor in the courthouse on Election Day.”

Merlino said all of the results are tallied up locally.

She recalled a person who insisted that Nye County voting machines are connected to the state.

“I had to tell them that they were wrong because that’s just not true,” Merlino said. “We tally locally then we send our results to the state. We will then send a backup of our election data to the state so they can review it. Just to be sure, on election night there is no direct connection to the state.”

Though Merlino said she appreciates the concern among many individuals this election cycle, they need not worry about the election being rigged in any way.

She also noted that many jurisdictions around the country utilize similar safeguards.

“I like that everybody is so concerned that their vote is going to count,” she said. “But it makes it much more difficult for us to do our job because we spend a lot of time and effort trying to debunk all of these false rumors.”

Merlino said during every election cycle, there are citizens who arrive to the courthouse on election night to observe the process, especially when local offices are in play.

“A lot of times they are attorneys from out of state for the different political parties,” she said. “We’ve had them before and we expect to have them again this year.”

Merlino said she is anticipating a large turnout for the start of early voting on Saturday.

“I just hope everyone is prepared to stand in line for a little while, but we will process people as fast as we can.”

Merlino also conveyed an important message to voters as it relates to the size of this year’s ballot.

“We have such a long ballot this time around because of all of our ballot questions,” she said. “There’s a two-page print-out, so when somebody goes to vote at the polls, on the machines they will press a button to print the ballot and then they will have to press continue to print out the second page of that ballot and I just want to make sure that everybody is aware of that because it may cause a little bit of confusion for some.”

For additional information on the general election in Nye County, call Merlino at (775) 482-8127.