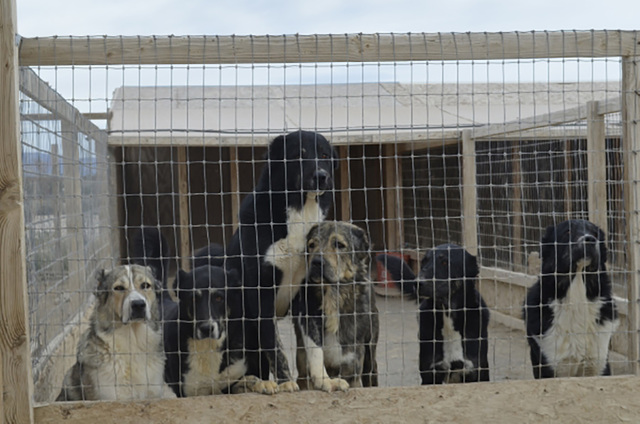 The Nye County District Attorney’s Office could be forced to step in to find housing for over 100 dogs that are currently housed in a kennel on the southern end of Pahrump. A request for a conditional use permit to increase the number of dogs was denied by the county. Special to the Pahrump Valley Times

The Nye County District Attorney’s Office might have to step in to find housing for over 100 dogs that are currently housed in a kennel on the southern end of Pahrump.

The Nye County Commission on Tuesday upheld the decision of the Pahrump Regional Planning Commission not to allow modification of a conditional use permit from 30 to 130 dogs for a two-year-period for Vasili Platunov, the owner of Est-Alfa K-9 Security Services, LLC.

Officials said the county doesn’t want to incur the cost to house the animals, but also doesn’t want Platunov to stay noncompliant, as he had violated his conditional use permit which allowed him to have 30 dogs, said Tim Sutton, Nye County deputy district attorney. The issue dates back to the fall of 2015.

“We have to find a way for these dogs not to cost the county a bunch of money,” Sutton said.

On Nov. 9, 2016, the Pahrump Regional Planning Commission denied Platunov’s request to modify a use permit to allow 130 dogs on his property. The planners stated that “the conditional use is not designed, constructed, and operated to be harmonious and appropriate in appearance with the existing or intended character of the general vicinity” and would be disturbing to existing or future neighboring uses due to the volume of barking and potential for odors.

Platunov’s attorney, Jonathan Nelson, argued in the documents that Platunov is trying to comply with the board’s requirement and said the property “isn’t a puppy mill and a majority of the dogs are used for security dogs.”

Nelson also said that his client is looking for an alternative place for the dogs, takes good care of them and the dogs aren’t overbreeding.

At the meeting on Tuesday, Christopher Alderman, another attorney for Platunov, said the applicant has come up with “some documentation showing that there could be grandfathered use,” however County Commission Chair Dan Schinhofen said that the commission couldn’t accept any information because it was unrelated to the current issue.

Platunov previously applied for a modification of the conditional use permit to increase the number of dogs to 150, but didn’t receive an approval from the Regional Planning Commission in November 2015.

Nye County commissioners then upheld the planner’s decision in January 2016 and gave Platunov six months to find homes for the dogs that he has on his property.

Platunov has dozens of kennels with Caucasian Ovcharkas, Turkish Kangal, Armenian Gampr and Georgian Nagazi breeds. Platunov said there are currently over one hundred dogs on the property, according to the documents.

On Dec. 2, Nelson said in the documents that should the conditional modification be denied, “the costs to the county would be substantial.”

Platunov’s dogs are a rare breed in the United States and the dogs weigh over 100 pounds and consume a large amount of food, according to the documents.

The local shelter is not equipped or funded to adequately care for such animals, Nelson said.

Est-Alfa K-9 Security Service breeds guard, patrol and detection dogs. It also offers foster and boarding services for dogs, according to its website. Platunov, who has been operating on a 2-acre lot located at 2790 E. Camellia St., in Pahrump since 2010. In the meantime, Sutton said the county will try to come up with possible options to remedy the situation. The item is expected to be back on the agenda in two weeks, he said.