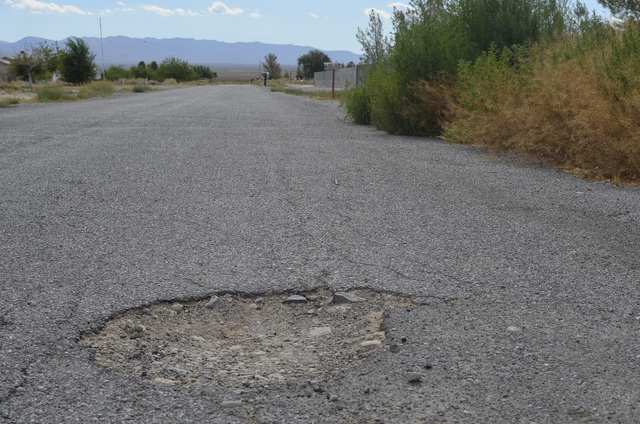 Nye County Public Works officials cited the dire conditions of roads and the lack of proper funding as the main problem after they presented a general road report to the Nye County Commission on Tuesday.

Road Superintendent Tim Carlo said Public Works received $838,000 from regional road budget and $1.4 million from quartersent. While the amount of money hasn’t changed from last year, Carlo said more cash is needed as many of the county roads continue to deteriorate.

“It’s getting worse every year, and we don’t have money to keep up,” he said.

Public Works Director Dave Fanning outlined some of the progress and plans.

“We are currently working on a Beatty airport beacon project and that is obviously in sync with everything that we happened to work off the grants,” Fanning said. “The other thing is Calvada Boulevard, we’ve met our timeframe for the Fourth of July parade, sidewalks in, paving in, safe landings in. The only thing that we have to do is actually curb return for the safe landings inside.”

Carlo added that the department pushed hard to complete the main part before the Fourth of July parade. Some signage and pavement markings still need to be done, he added.

Some of the ongoing projects included general maintenance in Amargosa and road maintenance in Beatty. In Pahrump, pothole patching has been recently completed from Calvada Boulevard to Dandelion Street; and skin patching was recently finished at the intersection of North Leslie Street and West Basin Avenue, as well as at Comstock and Upland avenues.

Other completed projects include general maintenance in Round Mountain, Gabbs and Tonopah, according to the report.

During the meeting, Commissioner Donna Cox also pointed at several potholes around Pahrump, including West McGraw Road and Calvada Blvd.

To determine the condition of roads, Carlo said Public Works uses a PCI (Pavement Condition Index) that requires sample areas of roads and rates on the scale from 1-to-100 based on their condition that is determined by cracks, potholes and weathering.

Commissioner Frank Carbone lamented the condition of the stretch of the road from Highway 160 to Highway 128.

“That road is falling apart, literally chunk by chunk, we are getting calls from people saying, ‘Hey this chunk hit my car, this chunk hit my windshield,’” he said. “We patch a little piece then we get five more pieces that are sitting there that should be picked up and fixed.”

“You have people going from Pahrump to Death Valley using that road,” he said. “We need to figure out what we are going to do with that [road].”

Addressing the issue, Fanning said he would look into the problem and apply PCI index to assess the state of the road.

“We can certainly address a lot of that, we can put a skin patch on which is going to buy it about five years, depending on the conditions and the flows, the drainage path down there, and some of those places really need to be taken out and rebuilt because they are beyond repair,” he said.

With budget being a major issue, Carlo said he still plans to include additional roads such as Homestead Road, Bell Vista Avenue and Mount Charleston Drive in a revised general report that will be available for the general public on July 15-16.

“We are pretty much complaint-driven,” he said.

In the coming weeks, the Nye County Public Works Department plans to continue installing crosswalks at schools per CAA recommendations, continue street sweeping throughout the valley to remove loose rock and weed mowing throughout several streets including Gamebird Road from Highway 160 to Homestead Road.