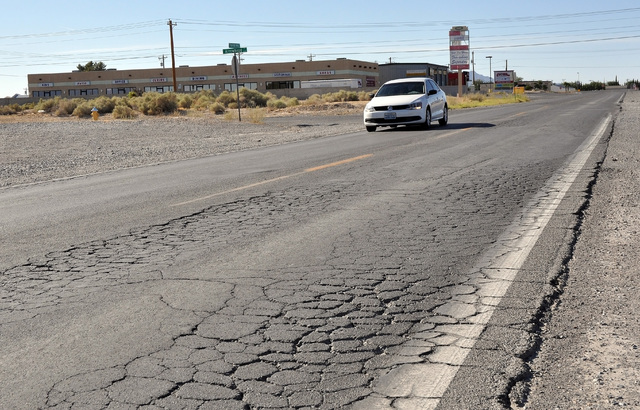 A $437,000 improvement project for project is planned for Pahrump Valley Boulevard between Highway 372 and Calvada Boulevard next year. The project will be funded partially by the new 5 cent gas tax increase. Horace Langford Jr./Pahrump Valley Times

The money that Nye County is now receiving through the gas tax hike will pay for more roadwork in the coming years, officials said.

The Pahrump Regional Transportation Commission on Tuesday presented an initial list of roads that officials plan to repair in the 2016-2018 fiscal years. The projects will be covered by the extra cash that the county is generating through the 5-cent hike that went into effect in January.

(We can fix) about twice as many roads as before, RTC member John Koenig said.

Nye County Department of Public Works road Superintendent Tim Carlo said the new gas tax brings an additional $90,000-$120,000 per month into the countys coffers. The county could net about $1 million in extra revenue per year, he said.

Carlo said the Nye County Public Works Department developed a list of roads based on the feedback that it got from several entities.

Its taken eight or nine months of conversations from RTC to the board level to people on the street. Its a collaboration of all the people thatve brought it to our attention and average daily traffic, Carlo said.

Nye Countys general fund doesnt cover road repairs, and officials said they can only fix roads with the money collected through the gas tax.

The gas tax is the only way we can fix roads, Koenig said.

The list has 12 roads throughout Nye County, including Tonopah, Amargosa Valley and Pahrump. The total cost of repairs is $4,515,276, according to the documents.

Weve got more roads that are just as bad, Carbone said. Just trying to get some of the bad ones in certain areas done, so we can work our way down.

Some of the highest priorities on the list are Farm Road in Amargosa Valley and Pahrump Valley Boulevard in Pahrump.

Officials plan to superpave most roads and do shoulder widening and level course with profile miling on some.

Superpave is an inch-and-a-half overlay over the surface of the road. The measure buys approximately 8 to 10 years before officials have to fix a road again.

That gives us more time to get other roads done and also more money to start putting away, Carbone said.

Additionally, Carlo said he plans to repair the second portion of the crumbling Bell Vista Road in Pahrump with the help of a Nevada Federal Lands Access Program grant.

I think we have a great chance of getting the NFLAP grant because of where it traverses, where it goes to and the majority of it crosses federal lands, Carlo said.

The Nye County Department of Public Works will spend $550,000 to superpave the crumbling portion of Bell Vista Road that stretches east from the California state line for 5.5 miles, officials said earlier.

In previous years, officials did maintenance projects on South Dandelion Street, Bell Vista Road and several other roads in Pahrump but they werent able to superpave them due to the limited funds.

The Nye County Department of Public Works has yet to put bid packages together for all of the projects. The packages will have to be approved by the Nye County Board of Commissioners.

At the Aug. 17 meeting, officials will add more roads to the list and prioritize roads for 2018 fiscal year.